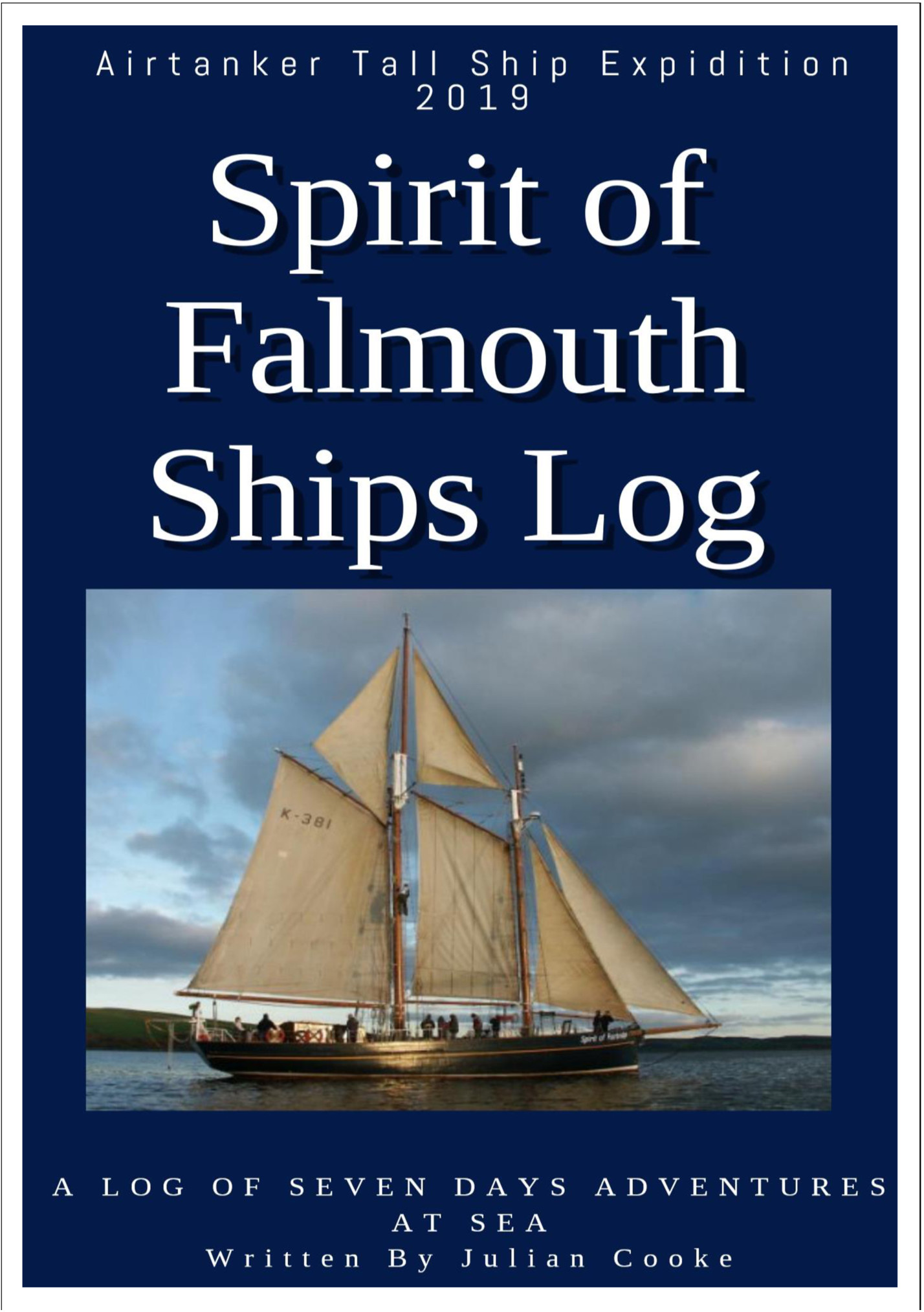 Spirit of Falmouth 24th – 30th September 2109 Prologue While most of Airtanker slept in the early hours, an intrepid crew gathered. 12 unsuspecting souls, volunteers you might say. They come from all corners of the business, some never had experienced sailing before. All united, intent in the pursuit of adventure. So here we are, in Falmouth on a boat none of us are capable of driving, in the pissing rain, what could possibly go wrong! This log is in part a factual recording of our journey, but also hopefully the light hearted literary musing of a 55!/2 yr. old teenager with minimal social skills & only a grade C CSE in English. A story of how 12 relative strangers are thrown together in a wooden coffin with sails, enduring everything that nature can throw at us, these pages recording the highs & hopefully not too many lows of a crews 7 day passage in to uncharted territory.

24th September 2019 Coordinates 50° 09’.181 N 005° 03’.737W Small out & return orientation sail to Falmouth Slip Lines: 14:00 hrs Alongside: 17:00 hrs Joining the Spirit of Falmouth was straightforward, collecting our foul weather wets, clambering aboard for introductions to the ship’s Captain & permanent crew followed by the usual safety briefs. Then fighting for bunks whilst otherwise familiarising ourselves with the ships facilities aka, the Head & its proper use. It may come as a surprise to some that the sleeping arrangements were both compact & mixed sex, no room for modern decencies on-board this vessel or any other of its age where women were not the consideration, as sailing vessels were very much a male domain. Thankfully times have changed, but the ships facilities sadly have not. The crew welcomed us with a meal consisting of soup de jour, vegetable, bread & cuppa. No time to get ship shape though, once the briefings were curtailed the lines were slipped for the orientation & familiarisation sail & once clear of the harbour constrains the sails were raised with military fashion to the, what would soon become the familiar shouts of 2, 6 heave. We were off sailing under full sails of Mainsail, Staysail & Foresail bound for Fowey at a knee trembling 8kts +. a 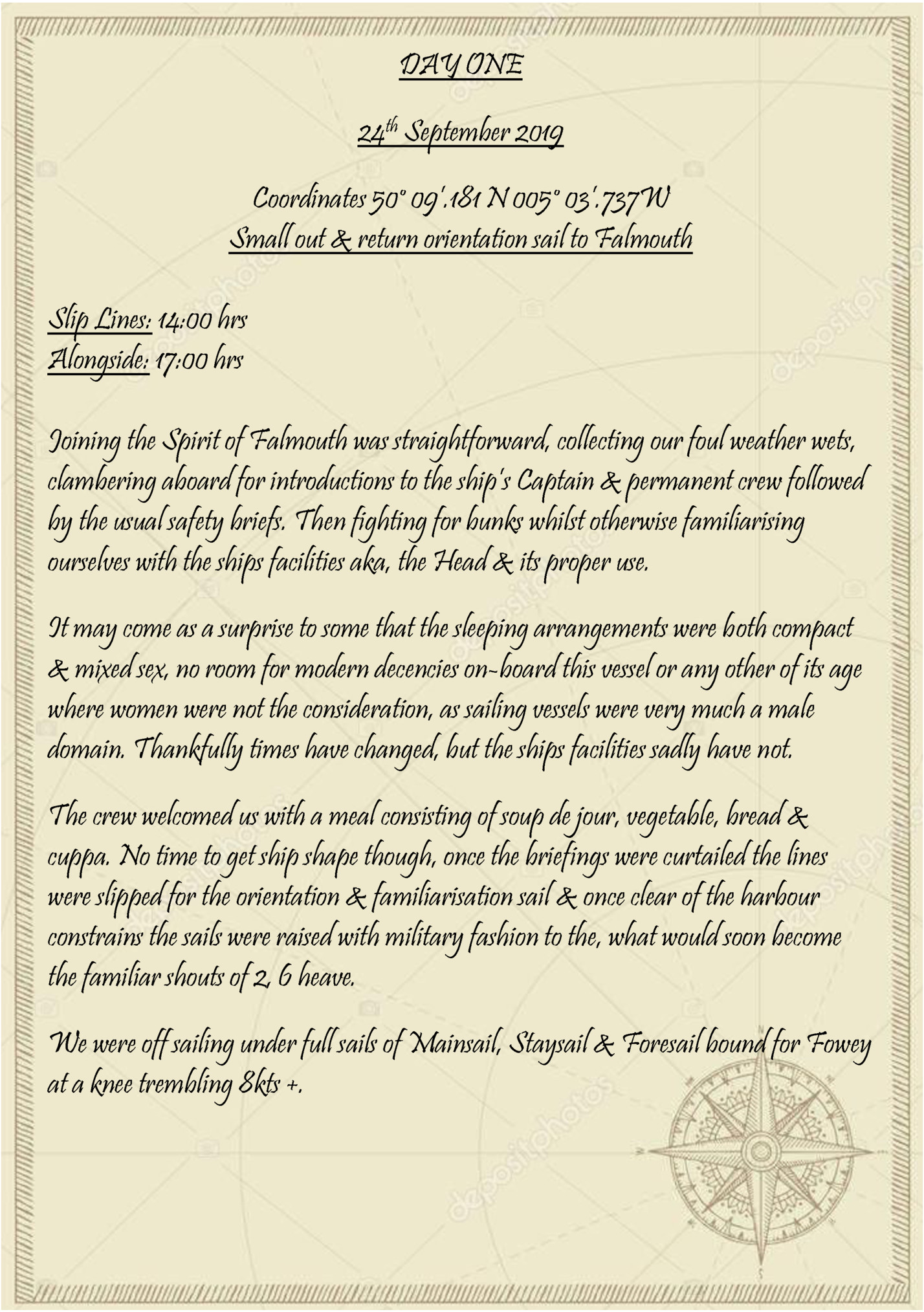 was set to deteriorate & wind strengthen to gale force 7 (32-38mph) occasionally 8 (39-46mph), a prospect neither this fledgling crew or the captain relished the idea of being caught in so the decision was made to return to port in Falmouth. However the day’s events were not finished with us yet. Whilst gybing about & resetting the sails for the journey back, the starboard upper backstay eyelet sheared & let loose, flew up into the air with a huge bang, not a sound that instils confidence in a crew on their first voyage, not to mention the proximity of the projected eyelet to Harry’s (first mate) genitalia on its premature departure. As soon as the now flailing stay line was secured, we beated our retreat to Falmouth without further incident. Once berthed safely the beaming faces of the fearless travellers told its own story, undaunted by the day’s setbacks, they had tasted the sea & they liked it! Not exactly the start that was expected, but the weather was looking promising in the days to come so thoughts & expectations were gathering for an amazing journey both in adventure, but also in personal achievement. As a crew, it is early days to how the dynamics of the group will develop, but as dinner of Spag Bol simmered quietly on the stove, thanks to Simmo & Rob rising to the challenge of cooking for 18. Tomorrow the anticipated passage will be to Fowey again & with it, more adventure. 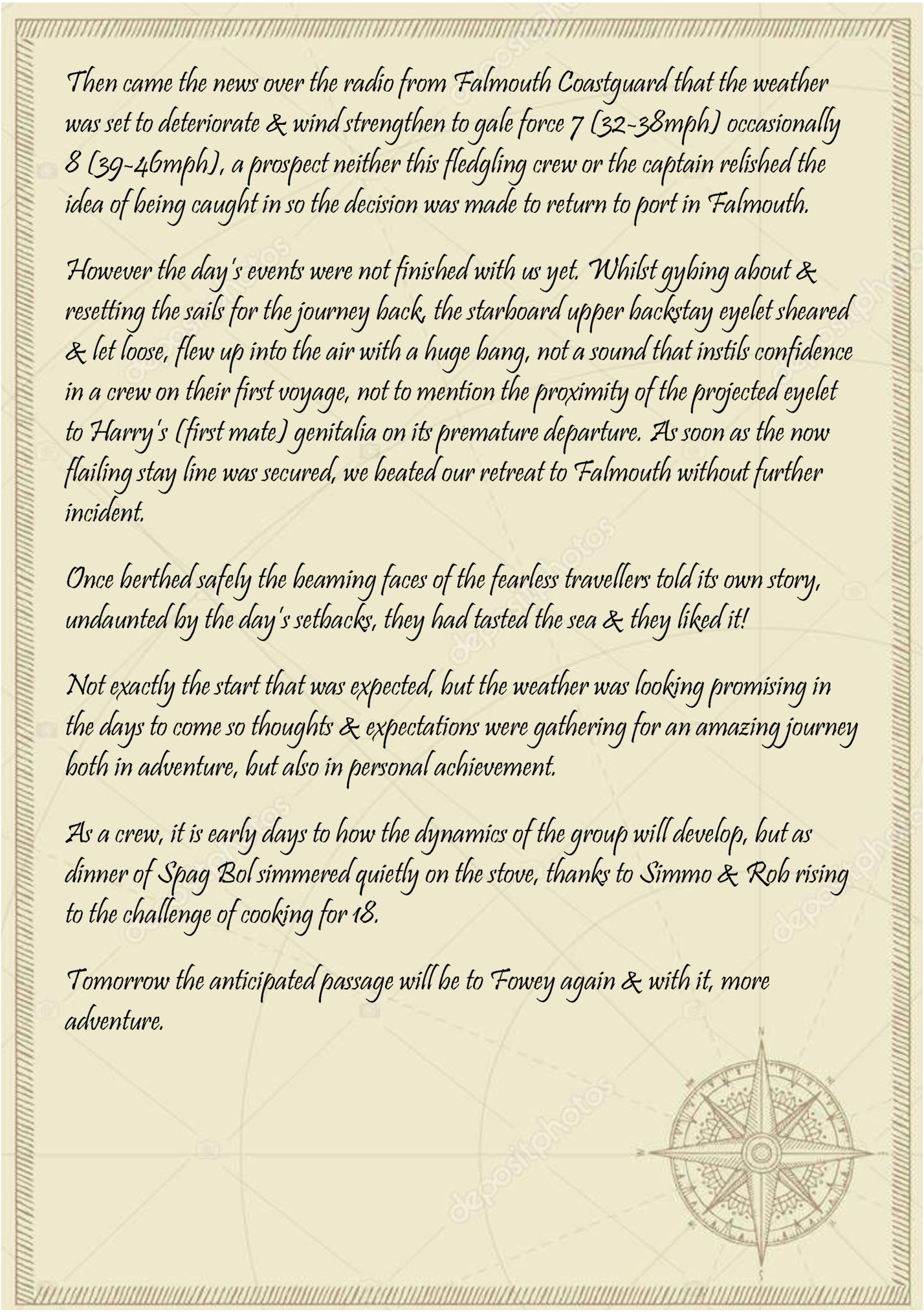 25th September 2019 Coordinates 50° 09’.181 N 005° 03’.737W Passage to Fowey Slip Lines: 10:45 hrs Alongside: 18:00 hrs After morning chores & breakfast we all mustered on deck for the days briefing & slipped lines setting out into the sound to a far calmer sea from the previous day & kinder weather too. The order was given to raise the sails which was done with an unexpected lightning speed, this time in addition to the Mainsail, Staysail & foresail, the jib was raised. We were up & running, clear of the headland heading due south into a large rolling swell of 4 to 5.5 metre high waves. We settled down to enjoy what was to be our first full days sailing. The sea played with our inner ear fluid, most feeling a little queasy & threatening to reunite some with their breakfast. Not long after a mop head strategically placed on the rope ladders to protect the sails, called baggy wrinkles in nautical terms, became entangled in the mainsail lanyard tackle block. Harry to the rescue! It would transpire this wasn’t going to be the only rigging kafuffle or hero moment for Harry, but more about that later. In fact it didn’t take long for what was turning in to be the trip that would become affectionately known as ‘What the fucks broken now leg’. 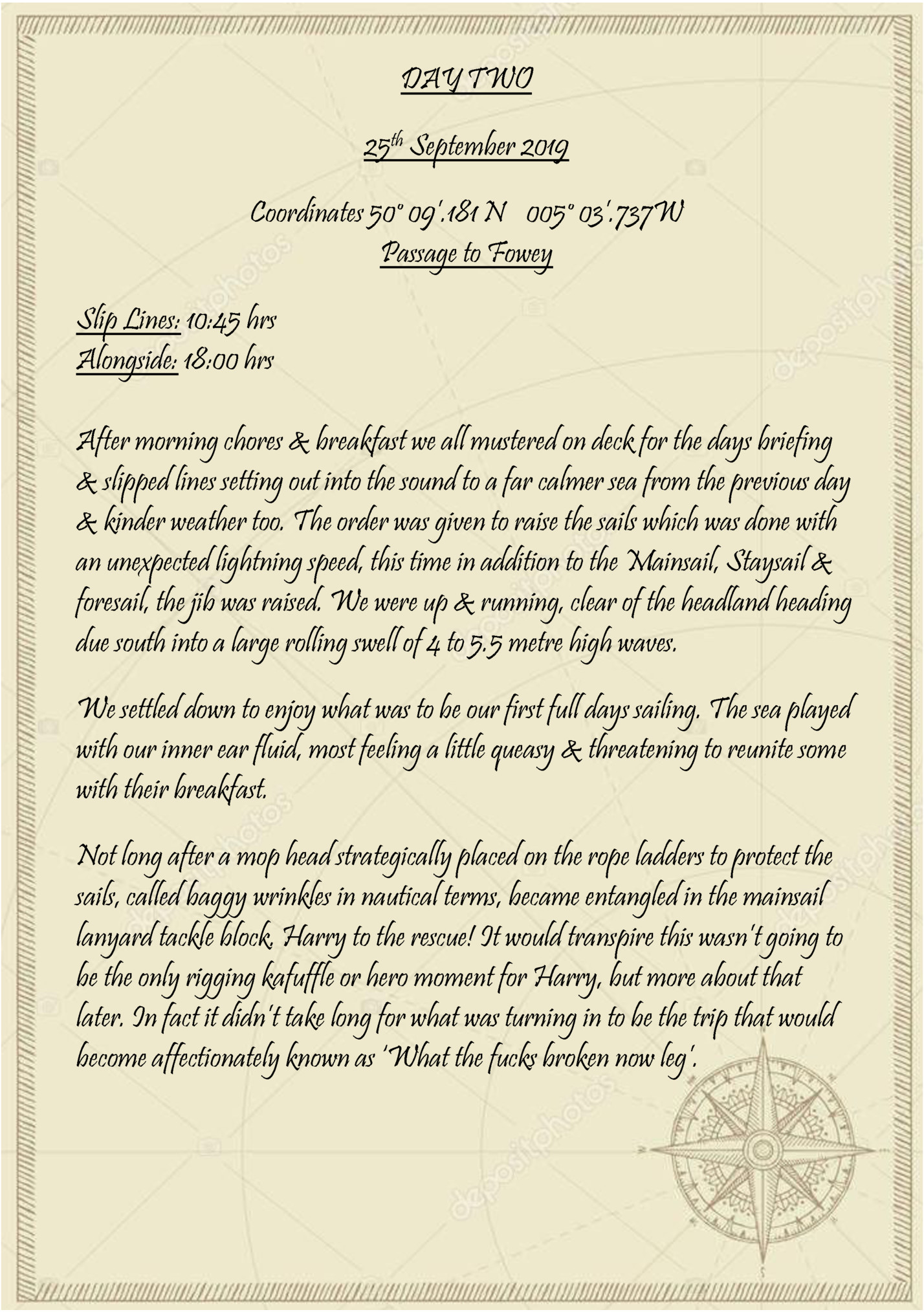 Approximately 2 miles out whilst being buzzed by an RAF Merlin helicopter, the

sails stalled & the engine was required to assist getting the ship moving again, however it refused to comply. The crew tried to get the stubborn motor to play ball for some 10 minutes & word started to spread of a further impending return to Falmouth which would have been a most unfortunate & disappointing event. Eventually however with many “What ifs” & “how about” the idea was suggested to remove the key & re-insert it may solve the issue & to the disbelief of onlookers it worked as the 6.7 litre diesel marine burst into life. Captain Paul made the decision to push on to Fowey & with that we tacked & turned east, trimming the sails for maximum speed. Lunch comprising of Pasty & beans, dutifully prepared by Richie & Mick, both of whom were seen bolting for fresh air mid cook as the sea did its best to reunite the pair with the contents of their stomachs. Mick finally succumbing to motions & becoming the begrudging winner of the first to puke prize! Or he could have been looking for an unknown crew member called Ralph, difficult to ascertain. Post lunch it was time to gybe again to avoid unnecessary sea cliff interaction & take us into a position to enter Fowey’s narrow entrance safely. During this leg Captain Wolverine as he was becoming informally know as due to his uncanny resemblance to his X-men doppelganger, gave us all a crash course in knot tying which passed a little time & were even briefly joined abeam off our port side by a pod of common dolphins, but were gone as quickly as they arrived, presumably because our bow wave was bit boring. 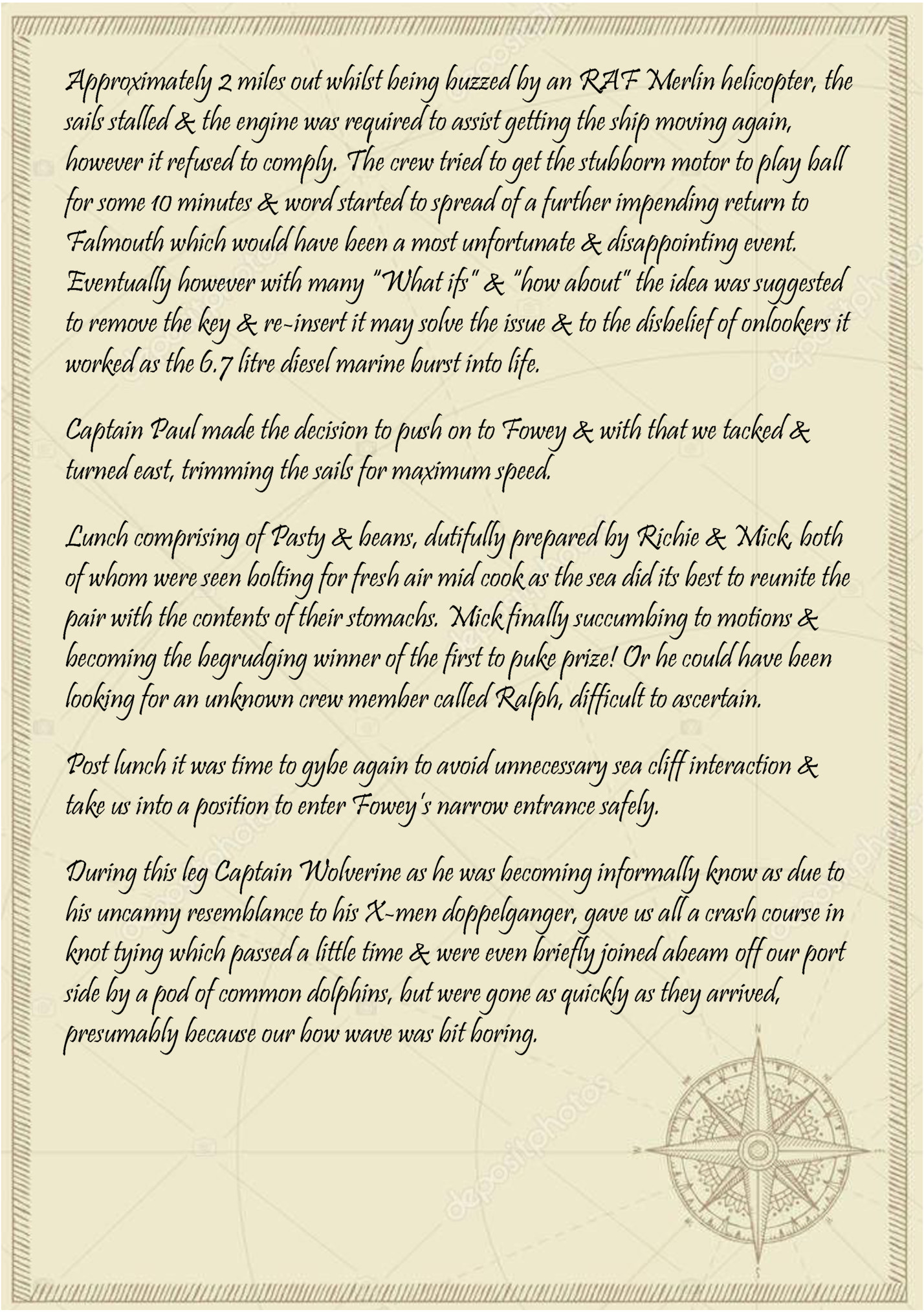 The threat of rain was never too far away, but although the skies we dirty grey &

promising a drenching, thankfully it remained dry although the sun refused to come out to play. After the last tack to head into the port of Fowey, it was time to start lowering the sails. First was the jib & as I eluded to earlier, the day had already been full of rigging related events. This time the jib refused to lower as was expected, the halyard having become jammed aloft in the rigging. After attempts to release it from the deck were unsuccessful it was concluded that the only way to release it was by climbing aloft to detach it manually. A task that was behest to the hero of the day Harry & Topknot aka Bernie, both shinning up to carry out the dangerous task not only 30 metres up the mast, but also in heavy seas which was propelling the said mast side to side with uncomfortable monotony. An hour or so later the jib was finely released, brought under control & struck to the deck followed by the rest of the raised canvases, finally making our way under motor through the narrow channel to, our home for the night. Berthing on a mooring in the harbour which was successfully attached eventually by Bernie who probably should have paid more attention during the knot lessons earlier that day. Tonight’s culinary delights for our delectation was chicken fajitas thanks to Katie & Mark D of which there was plenty. Belly’s full, talk turned to tomorrow & where we would end up. The plan was to slip lines early at around 06:30hrs for a passage to Dartmouth, so with that & our tired minds from a full day battling the elements & the ship, it was time for bed, goodnight! 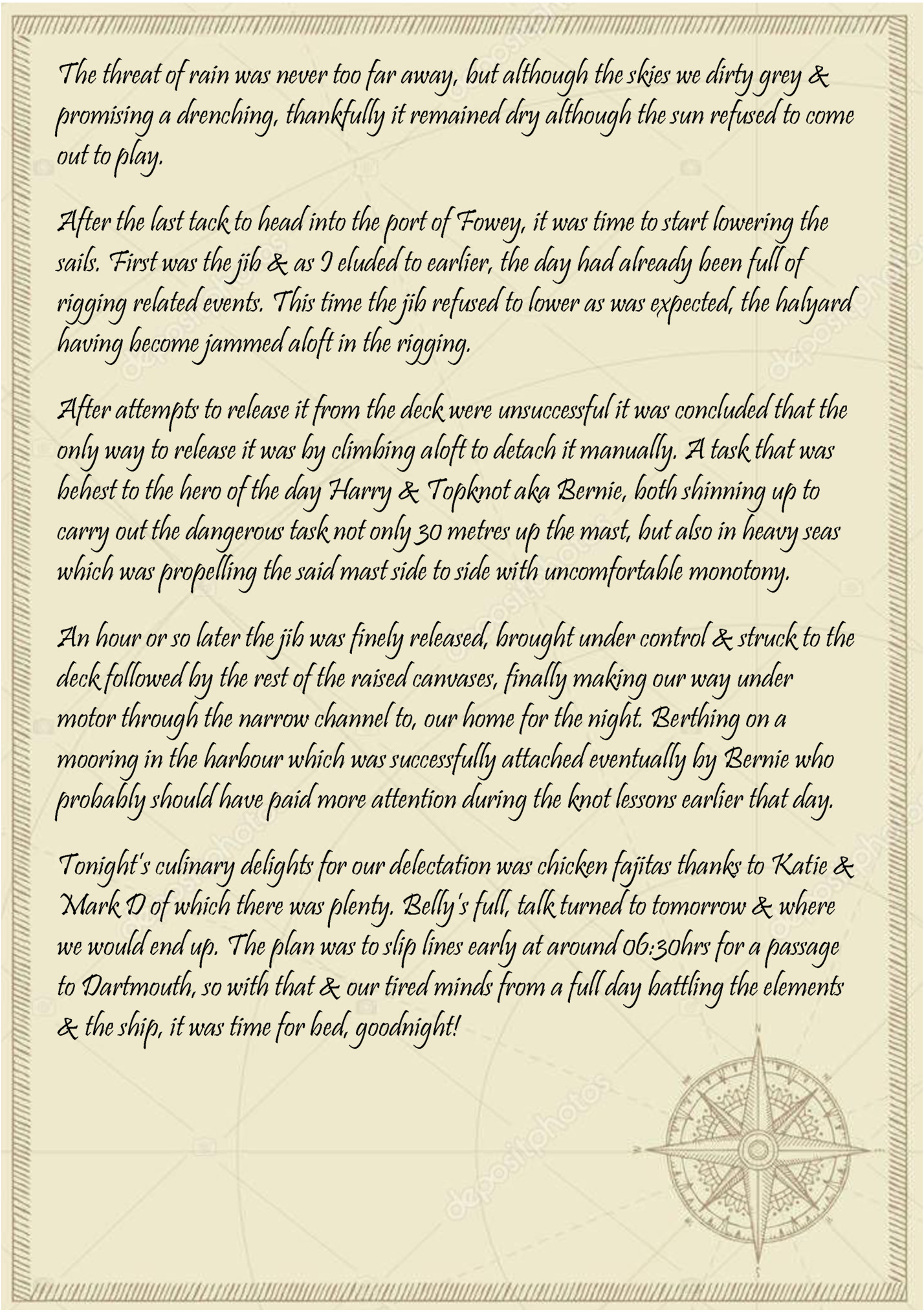 26th September 2019 Coordinates 50° 19’.904 N 004° 38’.108W Rest & recuperation day Slip Lines: N/A Alongside: N/A Today was to see us passage from Fowey to Dartmouth & the intentions were good with the crew & a few volunteers rising early at 05:30 hrs with the plan of slipping lines at 06:30 hrs. The boat had other ideas! The engine refusing to start once again. This time however the prognosis was more devastating & this time the remove key, refit key solution of the day before no longer had any validity in the seaman’s book of handy fixes. We were stood left scratching our collective heads to diagnose the cause at the heart of the disobedient engines refusals to comply with our demands. The wiring was checked, well once a serviceable multimeter was found it was, but without knowledge of the actual wiring system to hand it was proving difficult to pinpoint the faulty component. Was it the ignition barrel? Well maybe, it had seen better days, or was it the starter motor, a far more undesirable challenge, should it be faulty. Much tinkering & old school testing was carried out, namely hitting the starter with a hammer to try to ascertain if it was stuck, nope! . 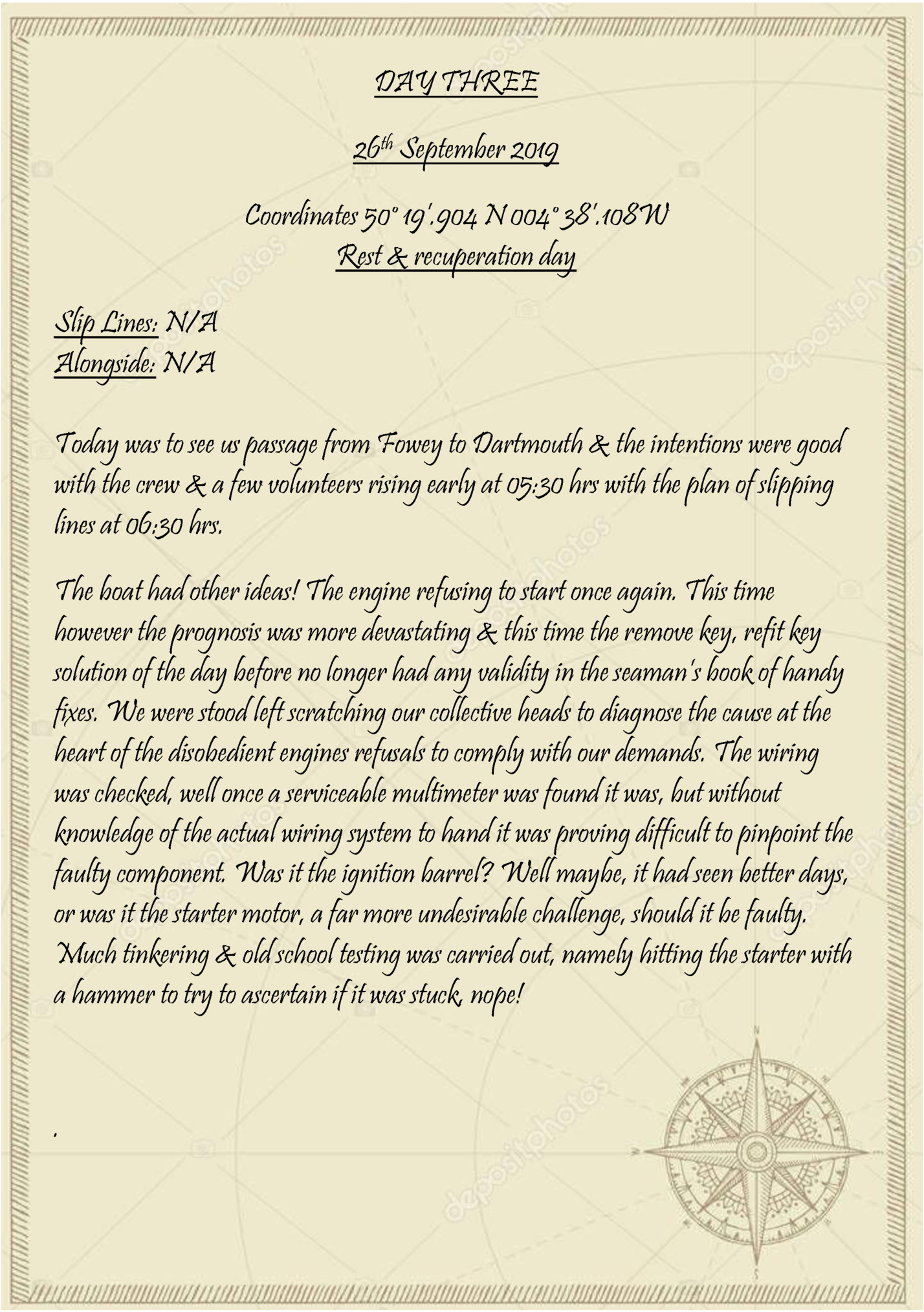 the starter. Eventually after much tutting & multimeter prodding a faulty relay was diagnosed, not because of expert electrical knowledge, but because when the multimeter was used to earth the relay the circuit was complete & the engine jumped into life whilst yours truly was still laid over it at the time. Once I had changed my underwear, we set about trying acquire a replacement relay. 2 hrs later & numerous phone calls someone was despatched from Turn to Starboard base to collect & deliver the offending item to Fowey. Meanwhile it was decided by Wolverine aka the Captain that by the time the part is delivered & fitted plus the poor weather forecast outlook, it would be prudent to scrub the sailing for the rest of the day & rethink our plans once the repairs had been brought to their fruition. Breakfast duty due to my slaving over a hot engine fell upon Kath’s more than capable hands as a lovely cooked breakfast was manifested in the galley & disseminated the plates of yumminess to the hungry hoard. With the decision made the ship became Mary Celeste like, most choosing to go ashore to watch the rugby at a local pub, probably given hindsight, not the great idea given the duration ashore & the compulsion whilst watching rugby to consume alcohol. I chose to remain aboard, mainly to assist with the repairs, but also the opportunity for a bit of fishing proving an irresistible lure. sightseeing tip in a rib up the river & harbour area, both involving totally sensible drinking practices! The crew relaxed 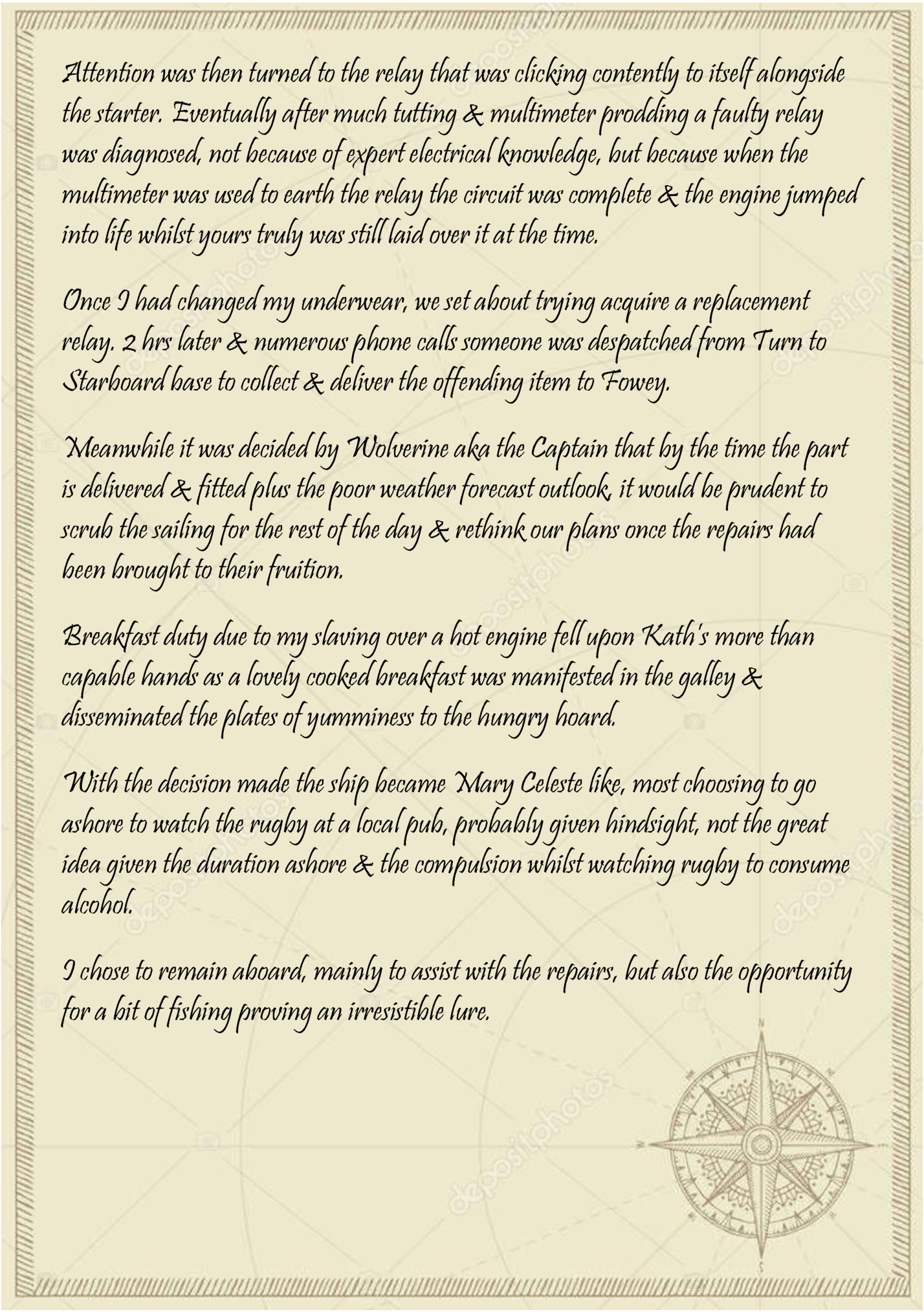