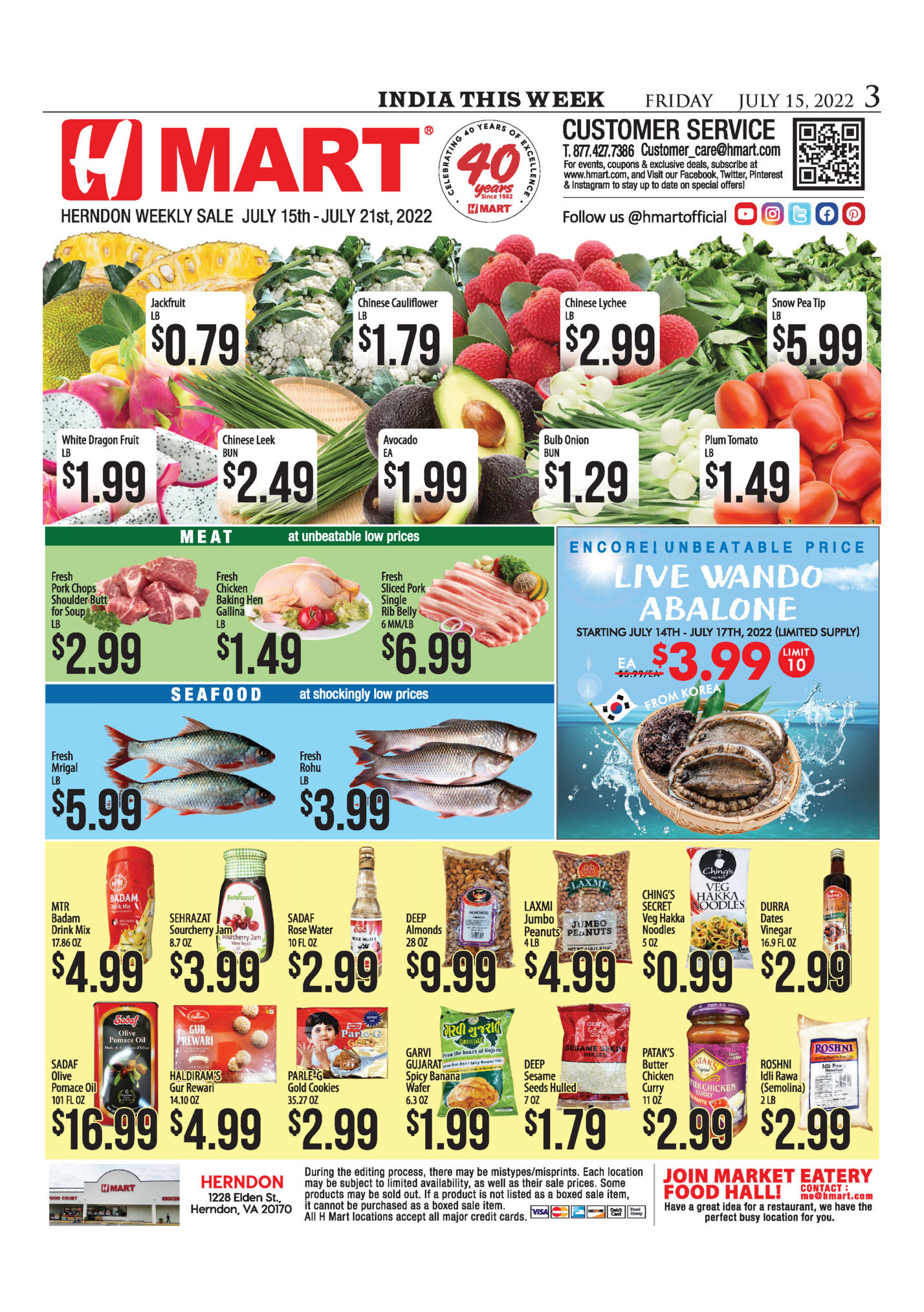 July 15, 2022 Friday INDIA THIS WEEK India’s inﬂation above tolerance for 6th consecutive month; here’s what analysts have to say New Delhi [India], July 13 (ANI): India’s retail inﬂation eased marginally to 7.01 per cent in June from 7.04 per cent in the previous month helped by softening crude and edible oil prices, while staying above the central Reserve Bank of India’s (RBI) tolerance limit for the sixth consecutive month. RBI predicts retail inﬂation to continue to remain high till the third quarter of the current ﬁnancial year 2022-23, before lowering. Apart from this, domestic wholesale inﬂation has been in doubledigits for over a year now. At present, RBI’s mandate is to keep retail inﬂation at 4 per cent with a tolerance band of 2 percentage points, i.e. 200 basis points on either side. Following are some of the views on India’s consumer inﬂation by analysts and ﬁnancial market experts: Vivek Rathi, DirectorResearch at Knight Frank India At 7 per cent in June 2022, headline consumer inﬂation continued to remain outside the RBI comfort zone with broad-based price rises across almost all the categories. Although elevated, various central government measures in the last two months such as reduction in petrol and diesel excise duties, cut in import duty on edible oils, curtailment measures on food exports, etc. helped contain inﬂation in June as seen in softened sequential price growth. The near-term consumer inﬂation outlook remains a little uncertain. The global commodity prices have started peaking out due to a slowdown in global demand; however, the wide gap between wholesale and retail prices continues to indicate further transmission of input costs to the consumers. Rajani Sinha, Chief Economist at CareEdge The inﬂation print is broadly on expected lines as higher costs for cereals, vegetables and services were offset by the lower edible oils and fuel prices. This month’s inﬂation data captures the impact of the excise duty cut on Petrol and Diesel announced by the Government. Going ahead, healthy monsoon progress and Kharif sowing will be crucial for containing food inﬂation. However, elevated global crude oil prices and the weakening of the rupee against the dollar pose threat to the near-term inﬂation outlook. We expect consumer inﬂation to track back within the RBI’s target range only in the fourth quarter of the current ﬁscal. For the full ﬁnancial year, we project inﬂation to average at 6.6 per cent. RBI’s policy action will be contingent on volatility in global crude oil prices and the rate hike trajectory by the US Fed. We see a 50 basis points rate hike in August policy followed by incremental hikes of 25 basis points each in the next two meetings (till December) with a terminal repo rate at 5.90 per cent. Nish Bhatt, Founder and CEO, Millwood Kane International – an Investment consulting ﬁrm The retail inﬂation for the month of June has clocked in at 7.01 per cent. It is softening albeit at a slower pace over the past three months. However, it is still three straight months of inﬂation remaining above 7 per cent and six straight months of inﬂation above the RBI’s aim of 6 per cent. The slight softening in inﬂation data is largely on account of a reduction in duties on fuel. We expect the inﬂation prices to harden going forward as high prices of crude and the impact of monsoon are factored in fully. Nikhil Gupta, Chief Economist at Motilal Oswal Financial Services India’s June inﬂation came in at 7 per cent YoY, similar to that in May 2022 and slightly lower than the consensus (our forecast of 7.3 per cent). Lower inﬂation was primarily because of lower than expected food inﬂation. Overall, there were no surprises in the data. Thus, no major implications for August monetary policy. We expect 25 basis points hike next month. Lower than expected inﬂation for the second consecutive month, however, is a relief. Going forward, we expect headline inﬂation to stay 7 per cent in 2QFY23 and ease towards 6.5 per cent in 4Q. Vijay Kalantri, Chairman, MVIRDC World Trade Centre Mumbai – an international trade promotion organization CPI is above the 6 per cent mark for the last six months in a row. The persistently high headline inﬂation has led to generalized inﬂation with a high inﬂation rate in services segments such as health, recreation, and amusement. We expect inﬂation to remain above the comfort zone of 6 per cent in the foreseeable future until the RBI’s tightening policy shows results by containing aggregate demand. (ANI) 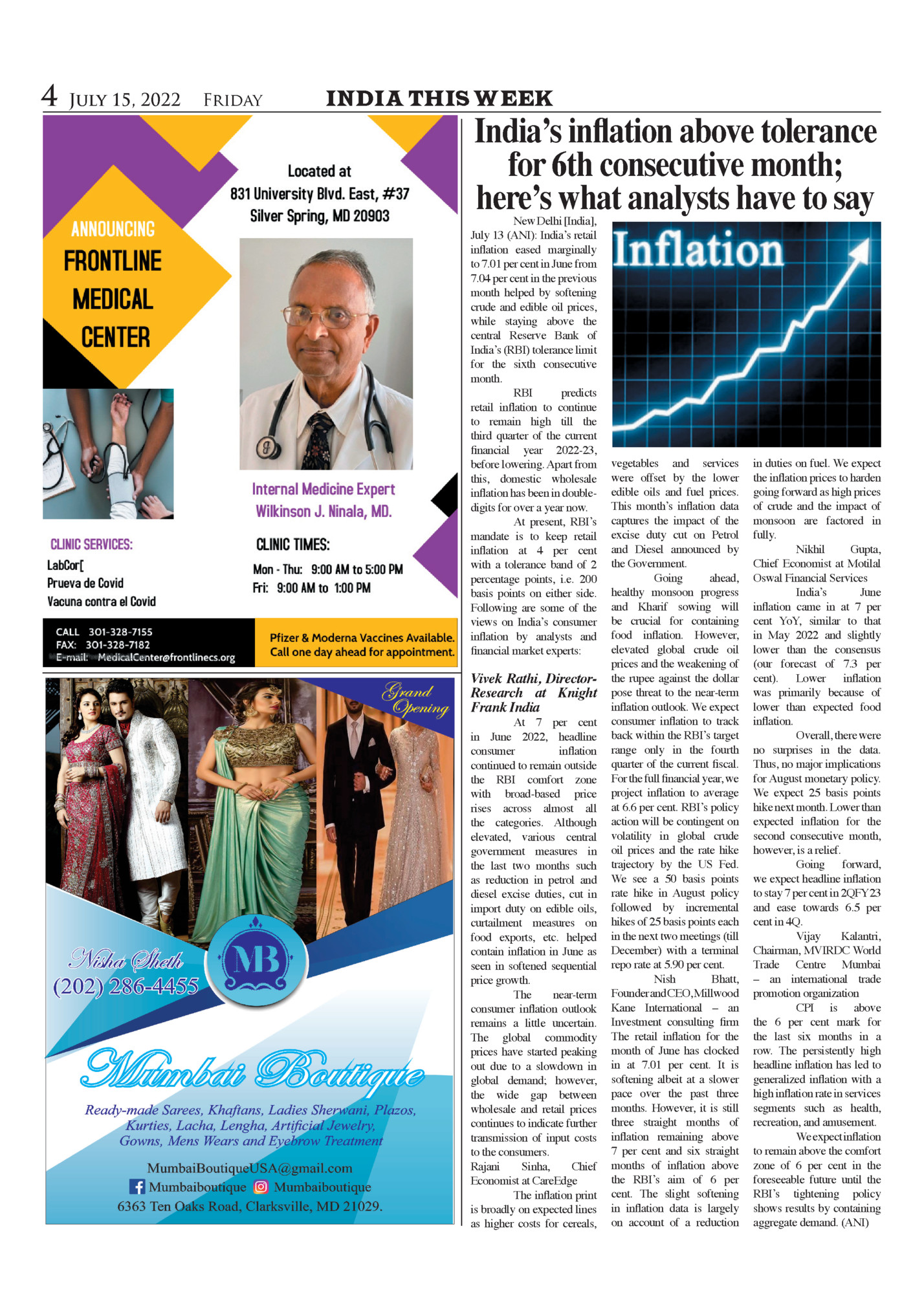 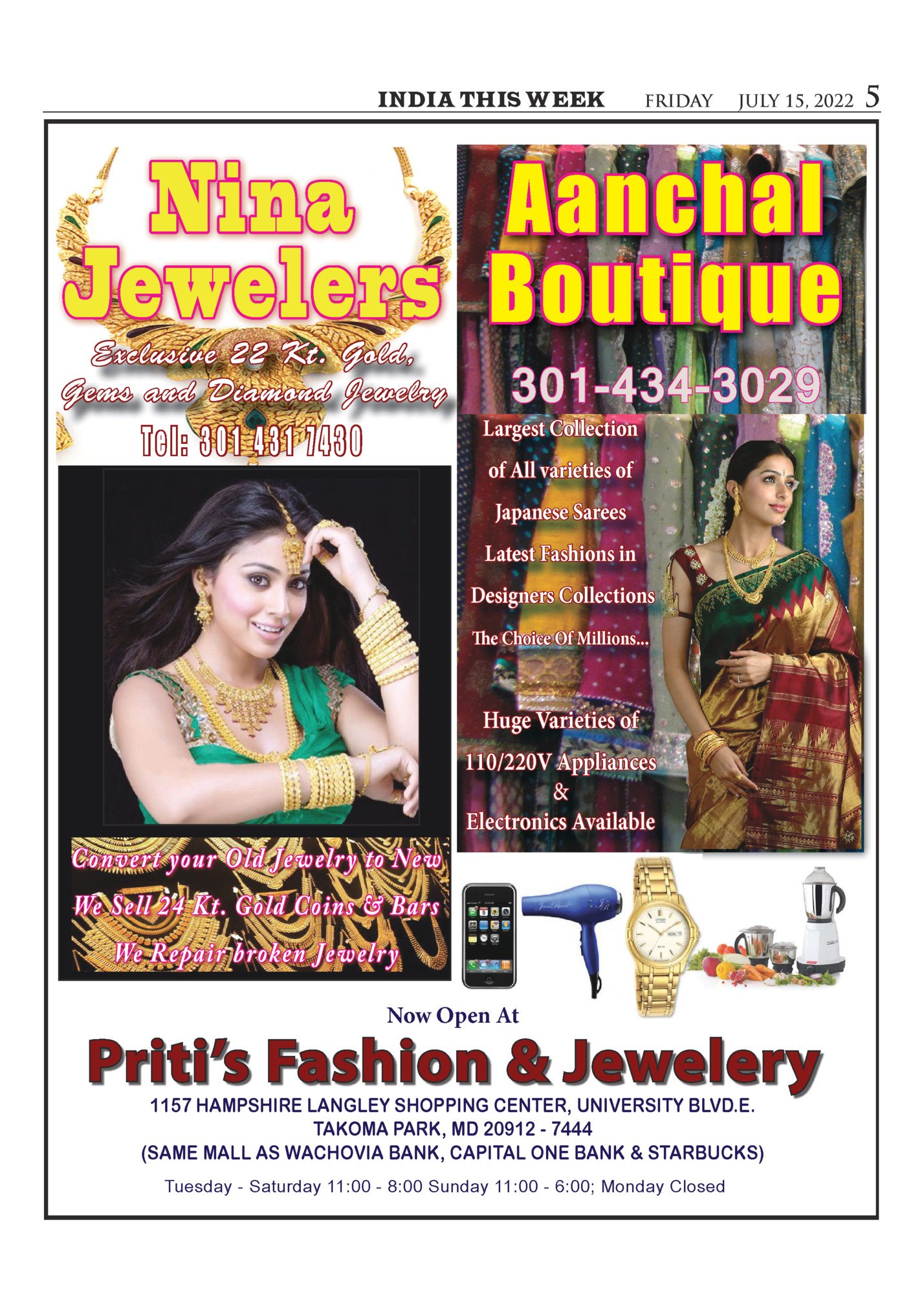 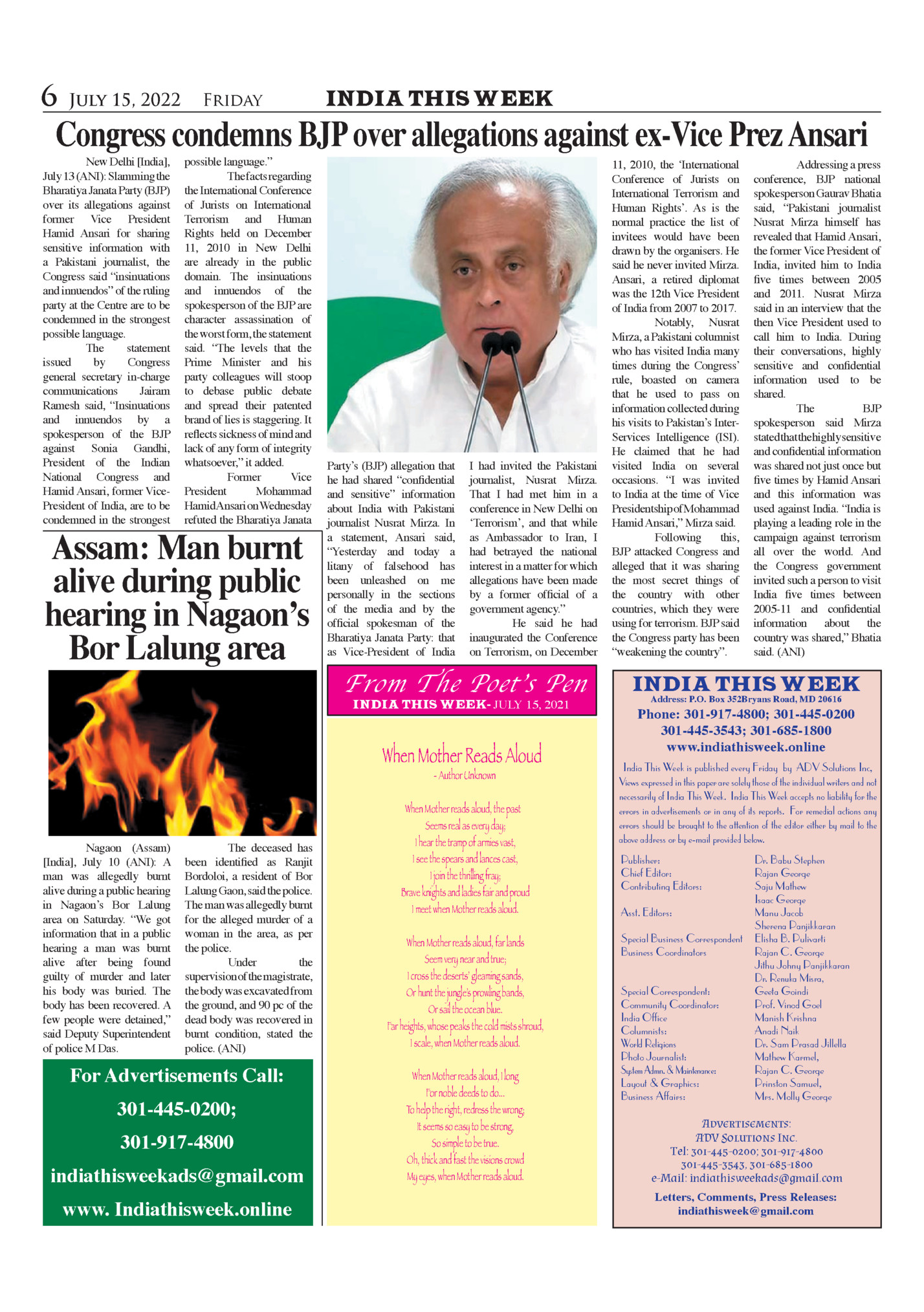 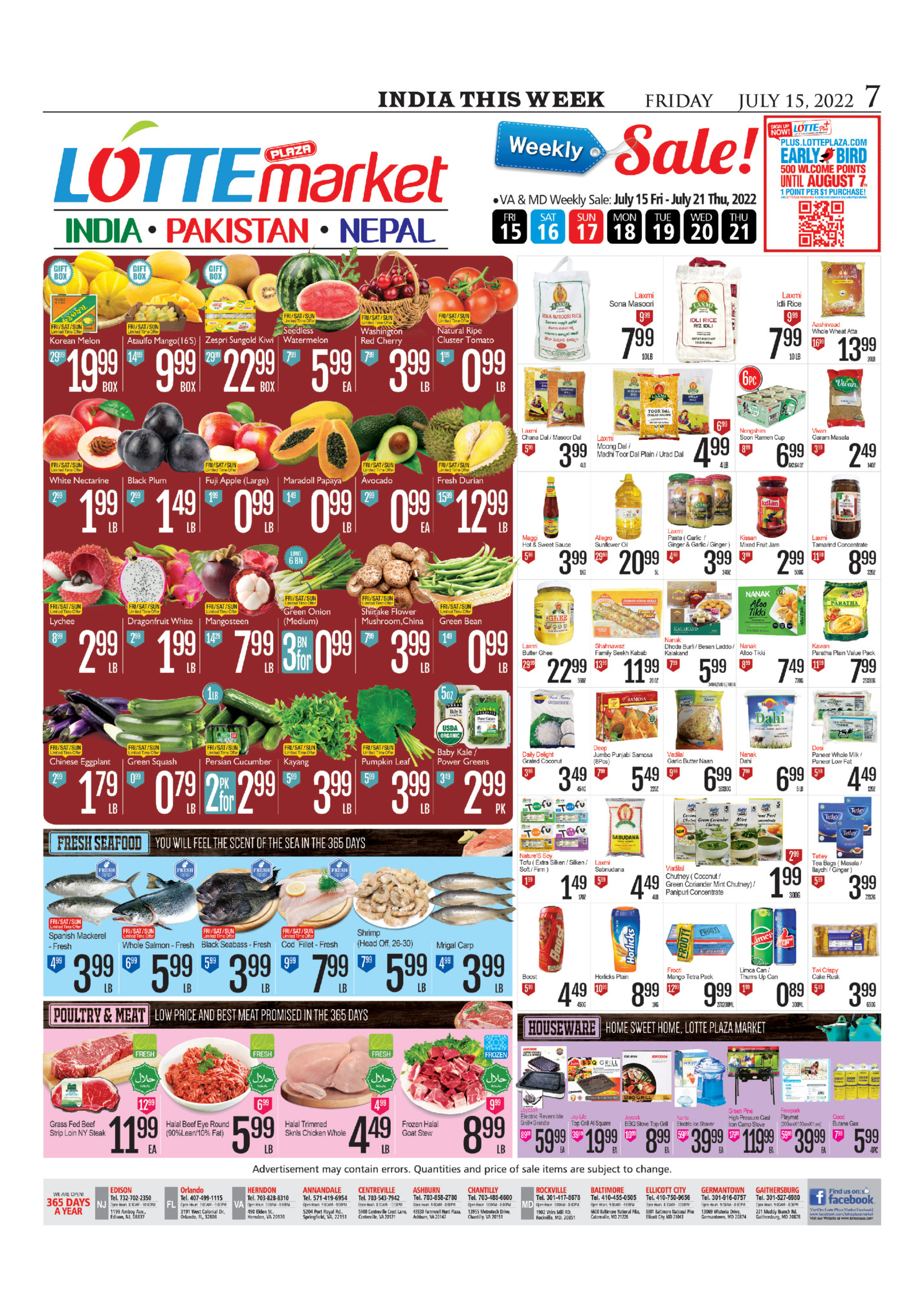 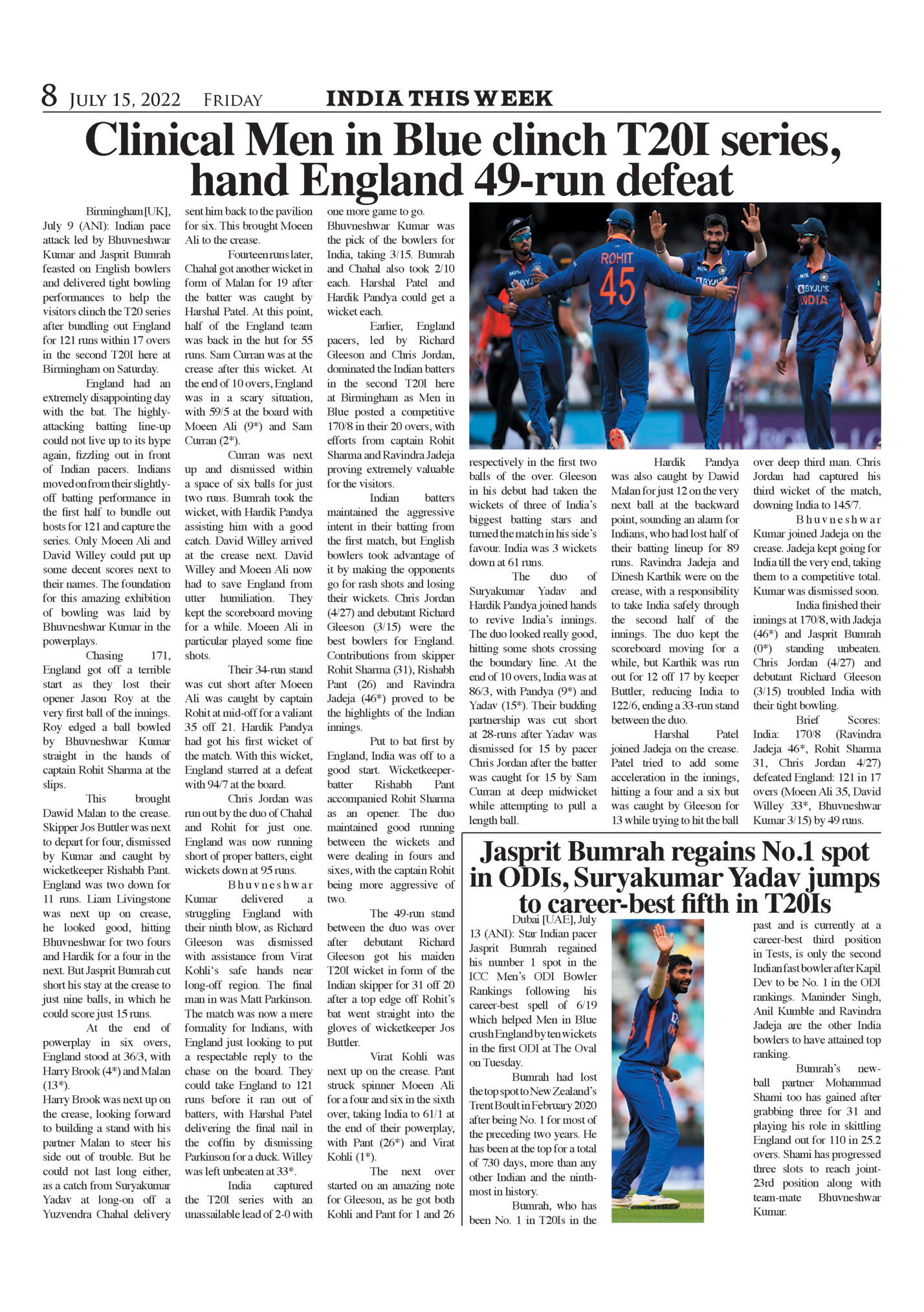 FRIDAY JULY 15, 2022 9 Sale Ends 7-30-2022 ENG vs IND: Men in Blue aim for seriesLondon [UK] Julylook and make deﬁnitely to win, hosts in to they are it even 13 (ANI): After cruising past England in the ﬁrst ODI, the Men in Blue will try to continue the same form coming into the second ODI to be played at Lord’s, London on Thursday. The ﬁrst ODI which was held in Kennington Oval was easily won by the Men in Blue. A tremendous performance from both the bowling and batting side of the squad ensured that India grabbed the ﬁrst win in the 3-match ODI series. Jasprit Bumrah was the man of the match in the previous match. In his 7.2 over spell, he scalped 6 wickets while only conceding 19 runs. His bowling partner Mohammed Shami also helped him with a spell of 3/31, as the total of England fell to only 110 with all of the English squad falling in 25 overs only. The small total of 110 runs was chased by the opening partnership of Rohit Sharma and Shikhar Dhawan, guiding India to the ﬁrst win in the ODI series. Excellent performances from both the pacers shows how good of a form they are be looked out for both by the English batsmen and also the fans. The explosive bowling by both of them and other pacers in the squad like Hardik Pandya and Prasidh Krishna will be backed by spinners like Yuzvendra Chahal and Ravindra Jadeja who will be looking to trap English batsmen. The bowling attack of India certainly looks strong for the next match as well after the marvellous performance in the ﬁrst match. After limiting English squad to a total of only 110 runs, it was all upto the Indian batsmen to win the game for the team and they did not disappoint. The opening partnership between Rohit Sharma and Shikhar Dhawan was enough to reach the mere total of 110 runs as the duo banged 76 and 31 runs respectively to win the game for the team. Both the openers look in really good form. Dhawan who got his place back in the squad recently will be looking forward to strengthen his position for the upcoming 50-over World Cup next year. India ﬁnish Women’s World Cup campaign with 3-1 win over Japan Terrassa [Spain], July 13 (ANI): Indian women’s team picked up a 3-1 win over Japan in the 9-12th placings match of the FIH Hockey Women’s World Cup Spain and Netherlands 2022 at Estadi Olimpic de Terrassa, Spain on Wednesday. Navneet Kaur (30�, 45�) starred for India, scoring a brace, while Deep Grace Ekka (38�) also scored a crucial goal in the match. For Japan, Yu Asai (20�) scored the sole goal in the match. India started the match on front foot as Neha passed the ball inside the circle towards Navneet Kaur to set up an early chance. A few minutes later Gurjit Kaur tried to give India the lead from a Penalty Corner. But Japan’s Moeka Tsubouchi defended well to clear away the ball. The best chance for the Indian team came when Navneet Kaur broke through the Japanese defence and penetrated inside the circle. But Japan averted the danger and the ﬁrst quarter ended with both teams at 0-0. India began the second quarter from where they had left off. An early threatening move forced Japan’s Shihori Oikawa to save the ball from the edge of the goalpost. A shot on target from Vandana Katariya a couple of minutes later tested goalkeeper Eika Nakamura. A Penalty Corner in the 20th minute led to Yu Asai opening the scoring for Japan. Navneet Kaur equalised the score with a stunning late goal and the two teams went to halftime at 1-1. The second half started with both teams keeping the ball in the midﬁeld and trying to maintain possession. An early Penalty Corner attempt from Gurjit Kaur went wide off the target. But a few minutes later, Deep Grace Ekka converted from another Penalty Corner, hitting the ball towards the bottom right corner to give India a 2-1 lead. Japan conceded once again in the ﬁnal seconds of the quarter as Navneet Kaur scored her second goal of the match, and India increased their lead to 3-1. Japan started searching for goals to get back into the contest straight away in the ﬁnal quarter. But India maintained a strict defence line to prevent any danger. Lalremsiami opened up a dangerous move from the right ﬂanks to put the opposition on the back foot again. In the ﬁnal few minutes of the match, India maintained possession deep inside Japan’s half, while the opposition struggled to get on to the ball, and India picked up a comfortable 3-1 win over Japan. (ANI) 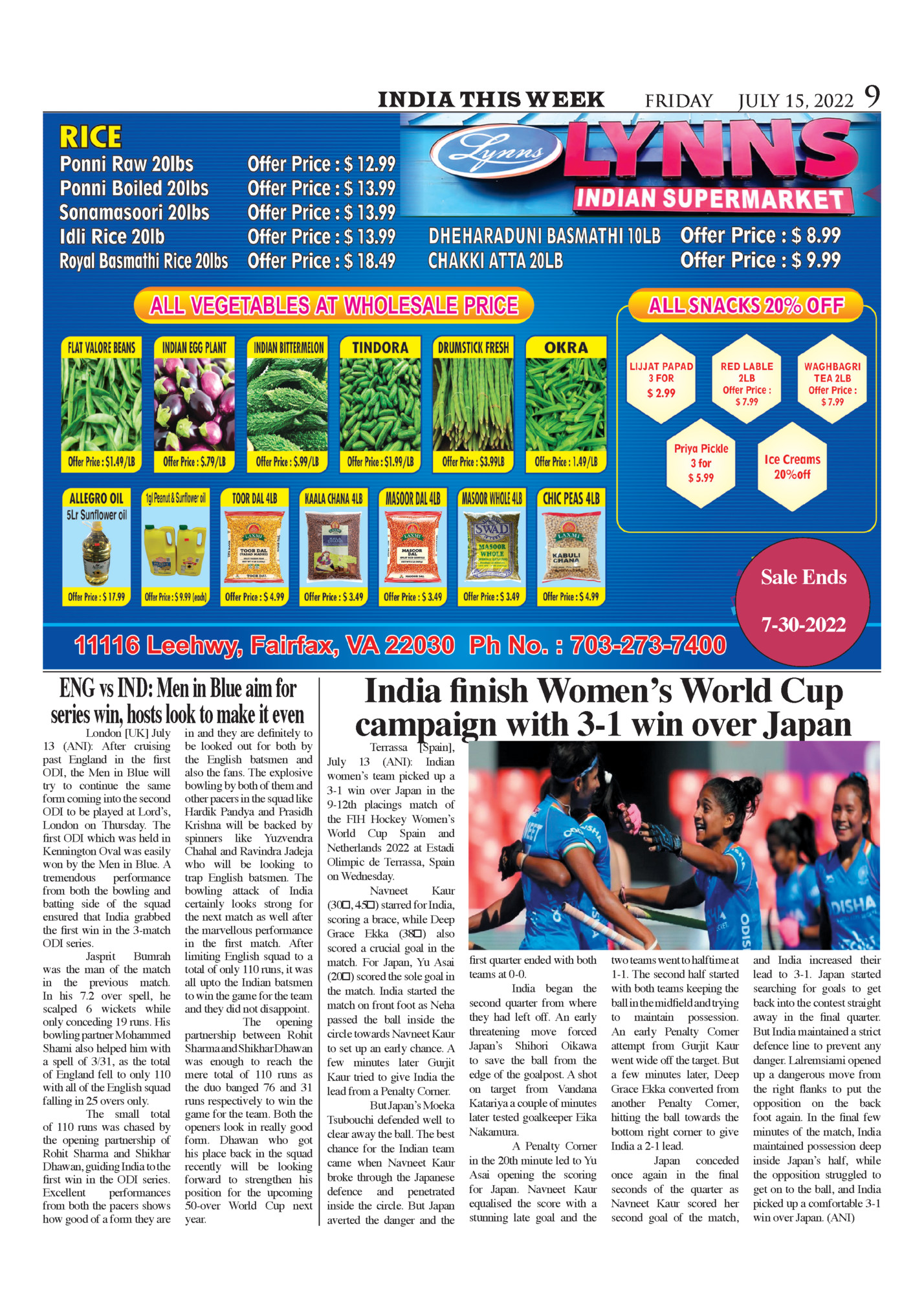