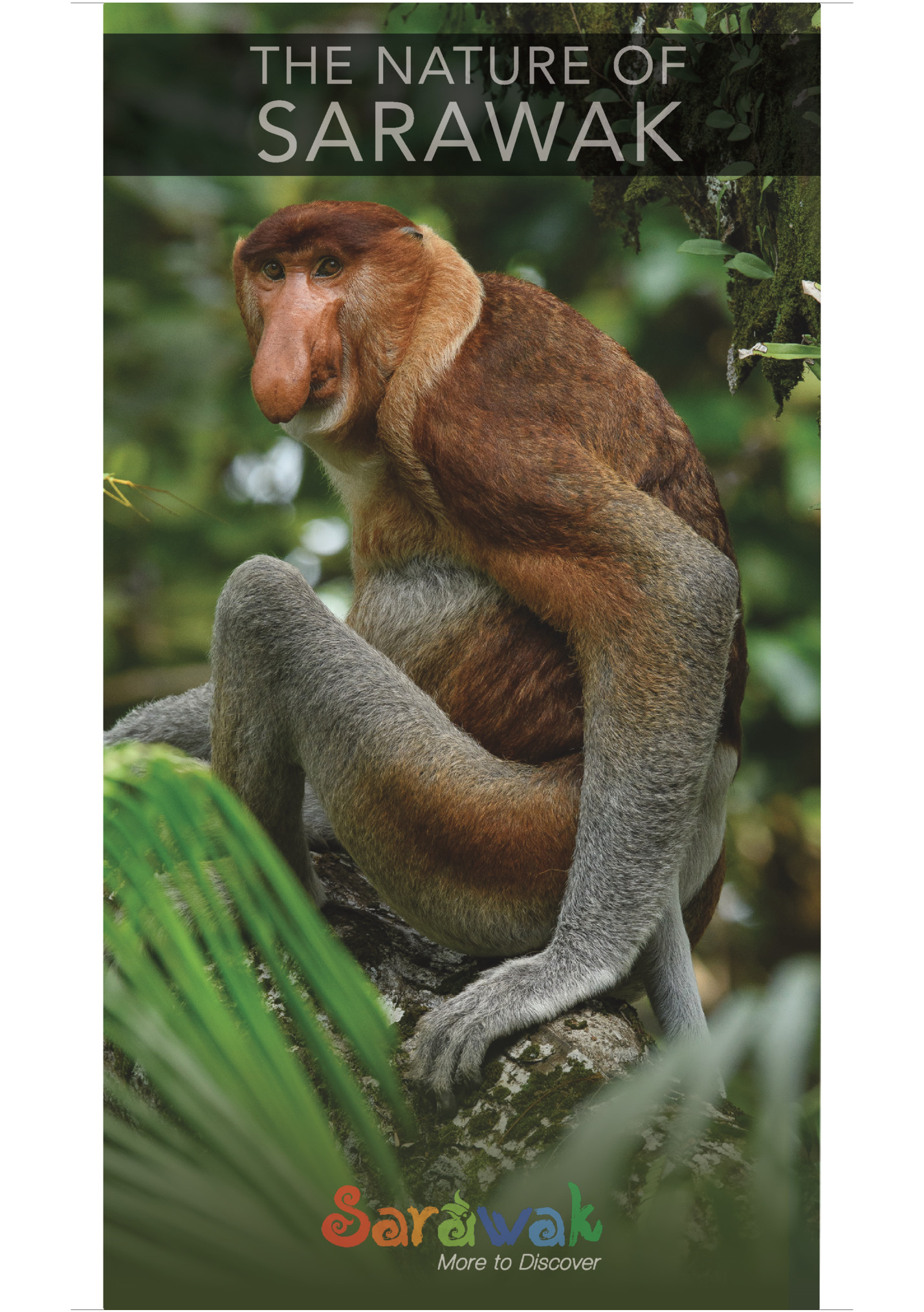 Sometimes referred to as the legendary ‘Land of the Hornbills’, Sarawak is the largest state of Malaysia and comprises the bulk of the northwestern coastline of the immense island of Borneo. Here, the ancient rainforests have existed for over 140 million years and are home to some of the planet’s richest biodiversity. 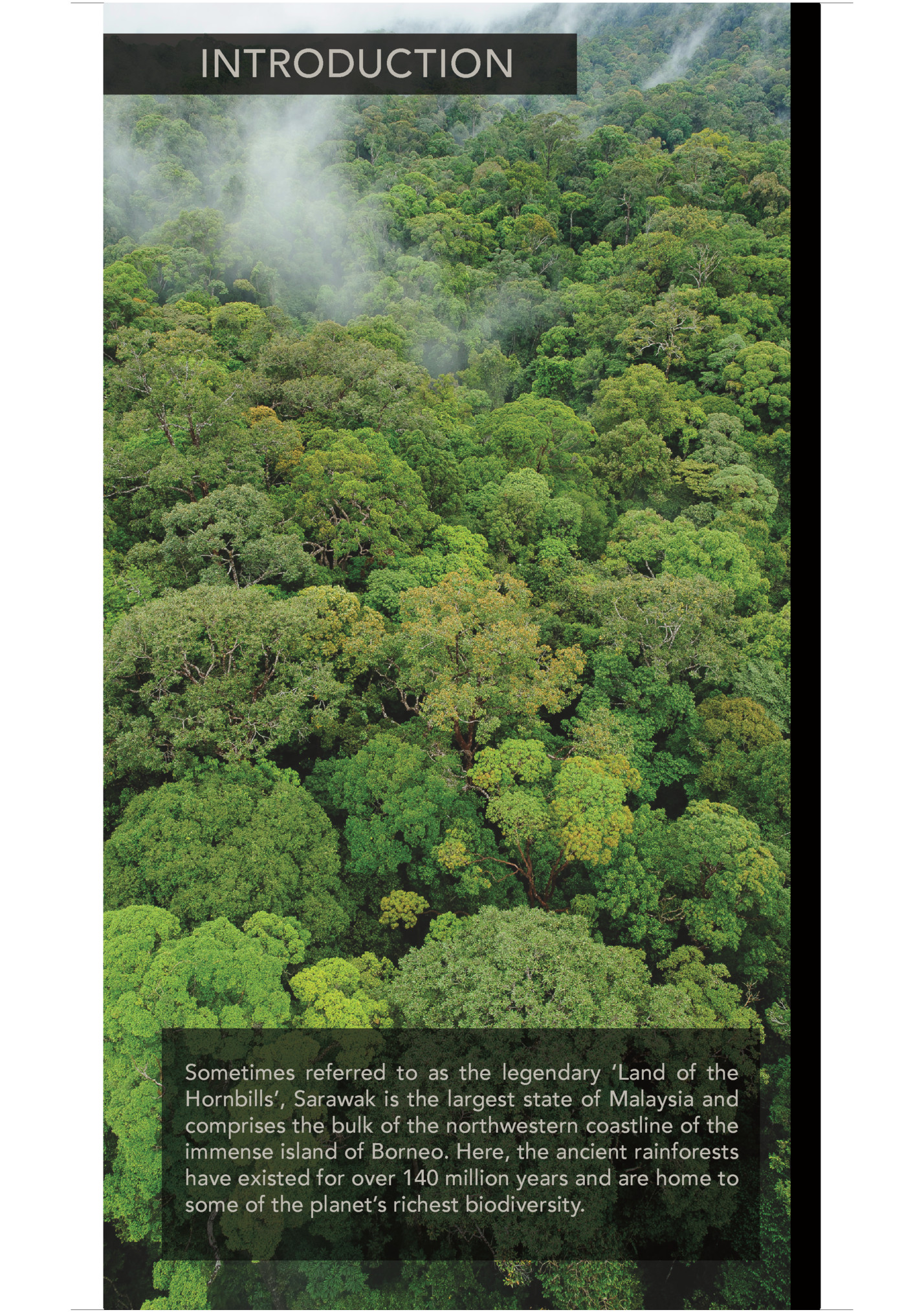 and nature reserves in the country. Ranging from the sandy beaches of coral-fringed islands, through vast and towering rainforests, to the mist-clad summits of the state’s highest mountains, these reserves together span more than 600,000 hectares of totally protected areas and provide visitors with an easy means of viewing the wondrous biodiversity that Borneo is most famous for. Rhinoceros Hornbill Buceros rhinoceros An ideal destination for wildlife enthusiasts, birdwatchers, and nature photographers alike, Sarawak has something to offer everyone. Although many of the more accessible parks are easy to visit and have a range of comfortable accommodation nearby, intrepid explorers may wish to venture to the remote interior of the state where the forests are seldom visited and offer the enticement of true adventure and discovery. 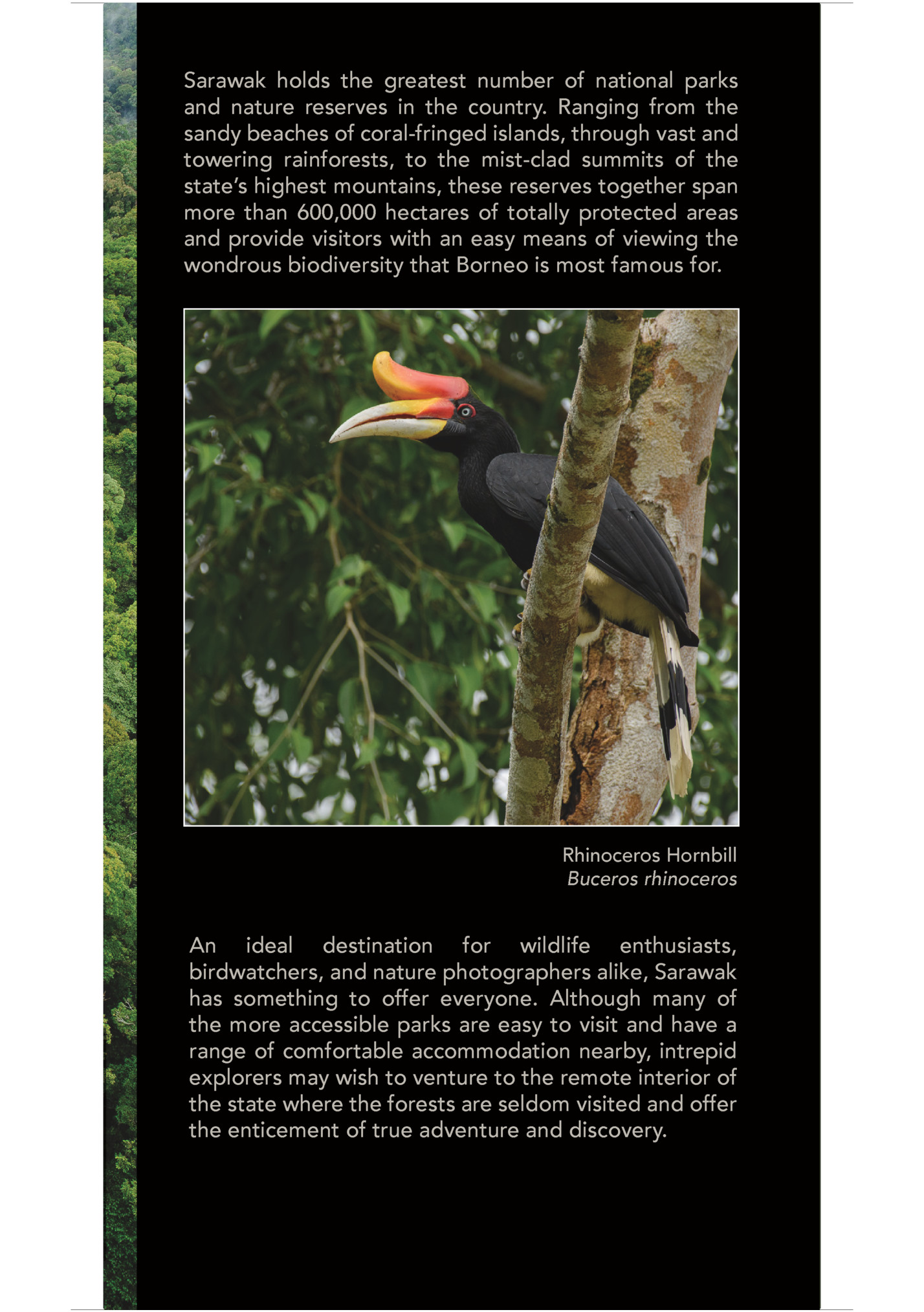 By far the richest habitat in Sarawak is the lowland rainforest which extends from the alluvial river floodplains up to about 1000 metres in elevation. Here the tallest trees can reach over 80 meters in height, with many supporting large clumps of epiphytic plants and vines. Some animals spend their entire lives high in the sunlit forest canopy, never descending to the ground except in death. The forest floor in contrast receives much less light but is nonetheless a veritable garden of shadeadapted plants and a teeming diversity of organisms that are adapted for a terrestrial life. 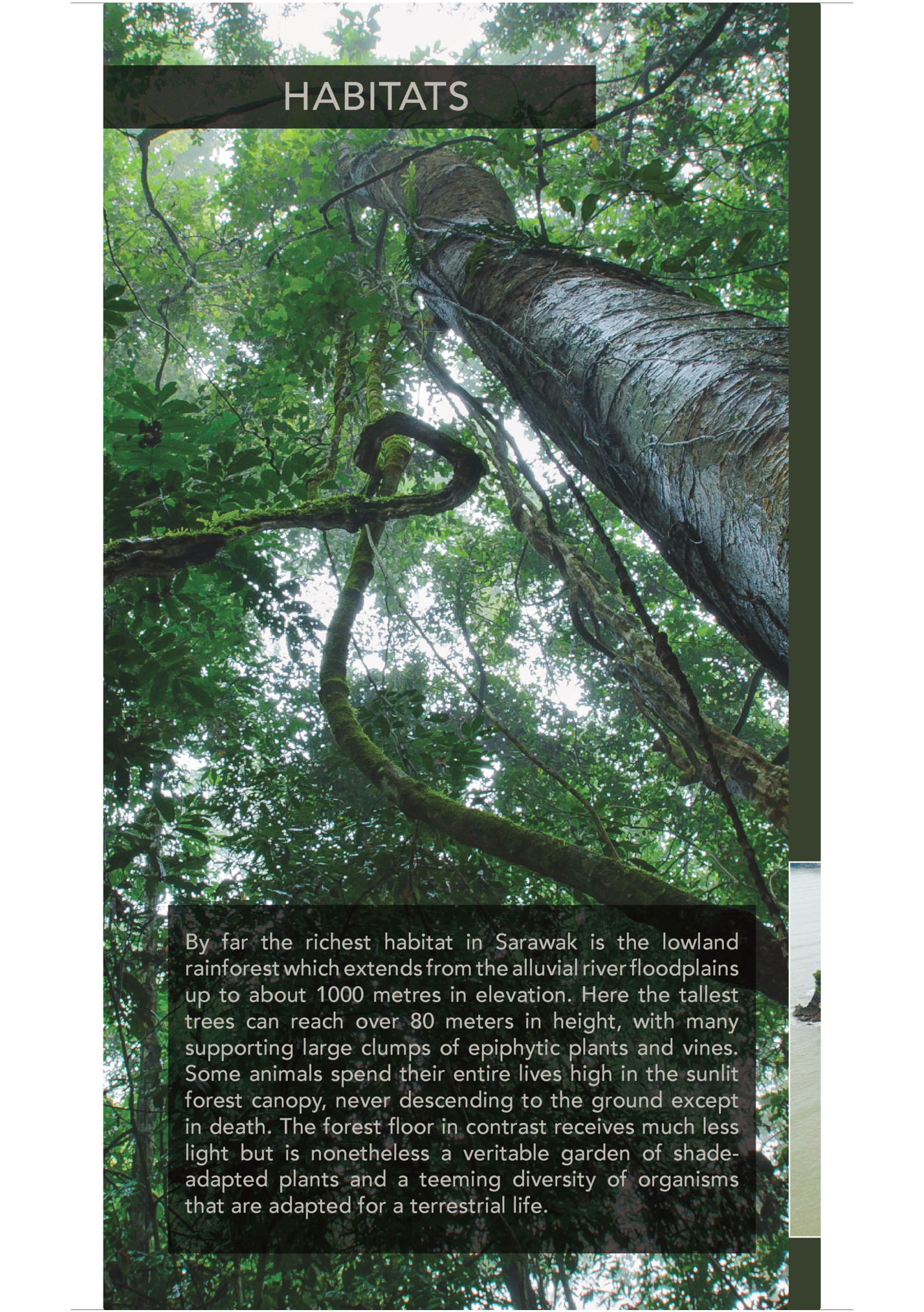 The hot steamy temperatures of the lowlands drop

rapidly as one ascends the mountains, with cool misty cloud forest usually occurring above 1,500 metres in elevation. Here the trees are smaller and covered with a dense layer of moss, and epiphytes such as ferns and orchids are particularly abundant. These montane habitats have their own array of endemic animals, most of which can be found nowhere else, and are best observed on the higher slopes and summits of Mt. Mulu and Mt. Murud. Mossy forest, Mount Mulu Heath forests occur on impoverished, often sandy, soils; their composition and diversity differ from normal lowland rainforest. This is best observed above the rocky coastline of Bako National Park, where the soil is so low in nutrients that many plants turn to carnivory and other means of acquiring food. Peat swamp forests, with their waterlogged and acidic soils, also support a distinctive forest type found nowhere else; this can be observed at Loagan Bunut National Park in northern Sarawak. Coastal forest, Bako National Park 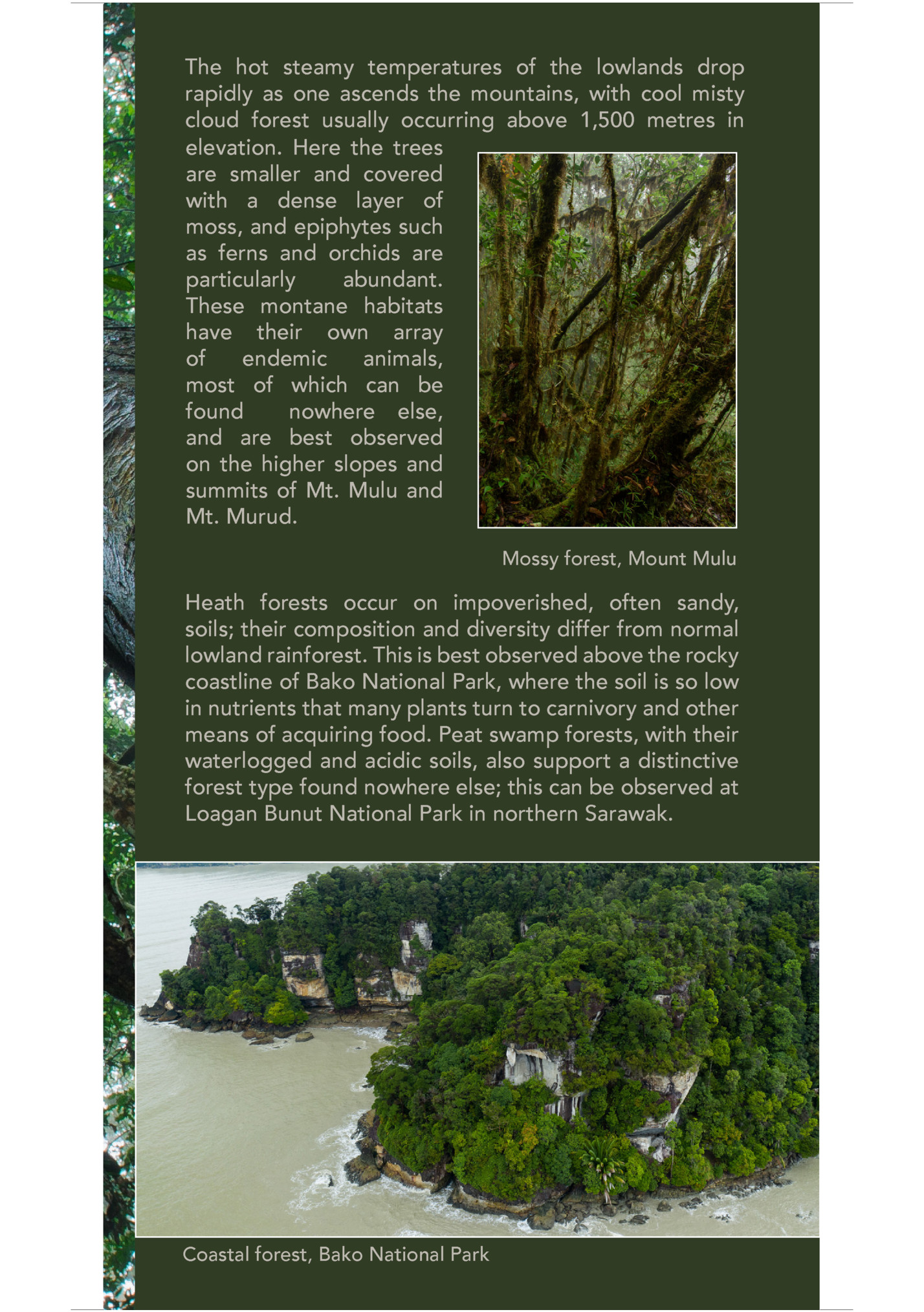 Northwest Bornean Orangutan Pongo pygmaeus pygmaeus Sarawak is home to an incredible 230+ species of land mammals, including most of Borneo’s endemics. Although many of these are shy and secretive, visitors with patience and a good guide can observe a great variety throughout the state’s network of national parks. Some of the top destinations for mammal watching include Tanjung Datu, Gunung Mulu, and Bako national parks. Among the more easily seen mammals are the 15 species of native primates. Top on most visitors’ lists is the Bornean Orangutan (Pongo pymaeus), with the variety present in Sarawak, the Northwest Bornean Orangutan (P. p. pygmaeus) being the rarest and most endangered of the island’s three subspecies. In Sarawak it is most easily observed at Matang and Semengoh wildlife centres where rehabilitated animals have been released back into the surrounding rainforest. 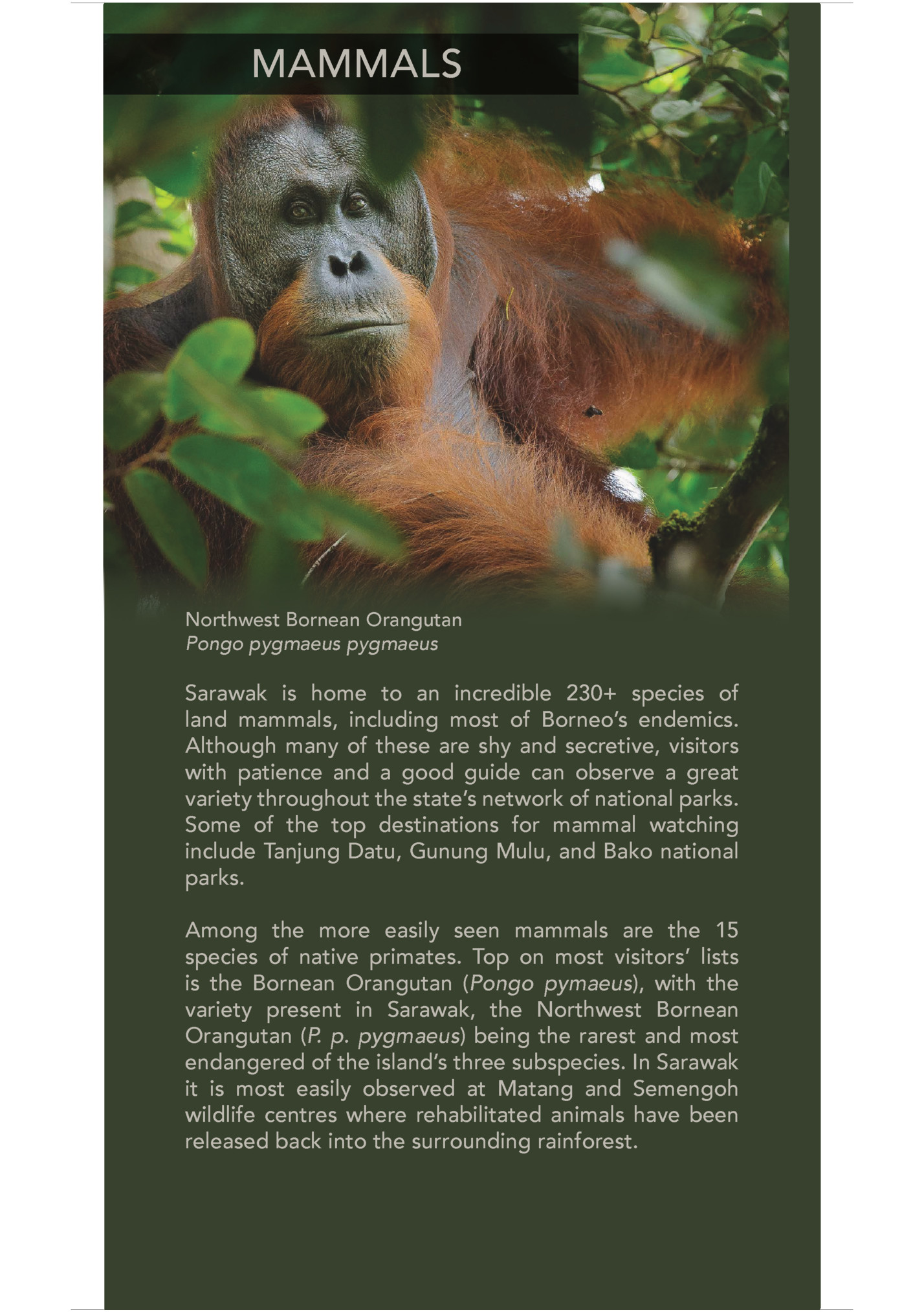 wishing to encounter a truly wild orangutan will need to focus their search on one of the few remaining parks where they still occur naturally, such as Batang Ai National Park. Another local highlight is the famous Proboscis Monkey (Nasalis larvatus), also a Bornean endemic. Maroon Langur The enormous noses of Presbytis rubicunda the adult males make them one of the most distinctive primates in the world. These animals occur in troops throughout the coastal forests of much of Sarawak where they feed on an assortment of tree foliage, avoiding sweet fruits that will disrupt the delicate balance of fermentation in their stomachs. Other leaf-eating monkeys include the various langur species, with the most common of these being the Silver Langur (Trachypithecus cristatus) that shares a similar coastal habitat with the Proboscis Monkey, and the Maroon Langur (Presbytis rubicunda) which can be found futher inland, particularly in the northern half of the State. Silver Langur Trachypithecus cristatus 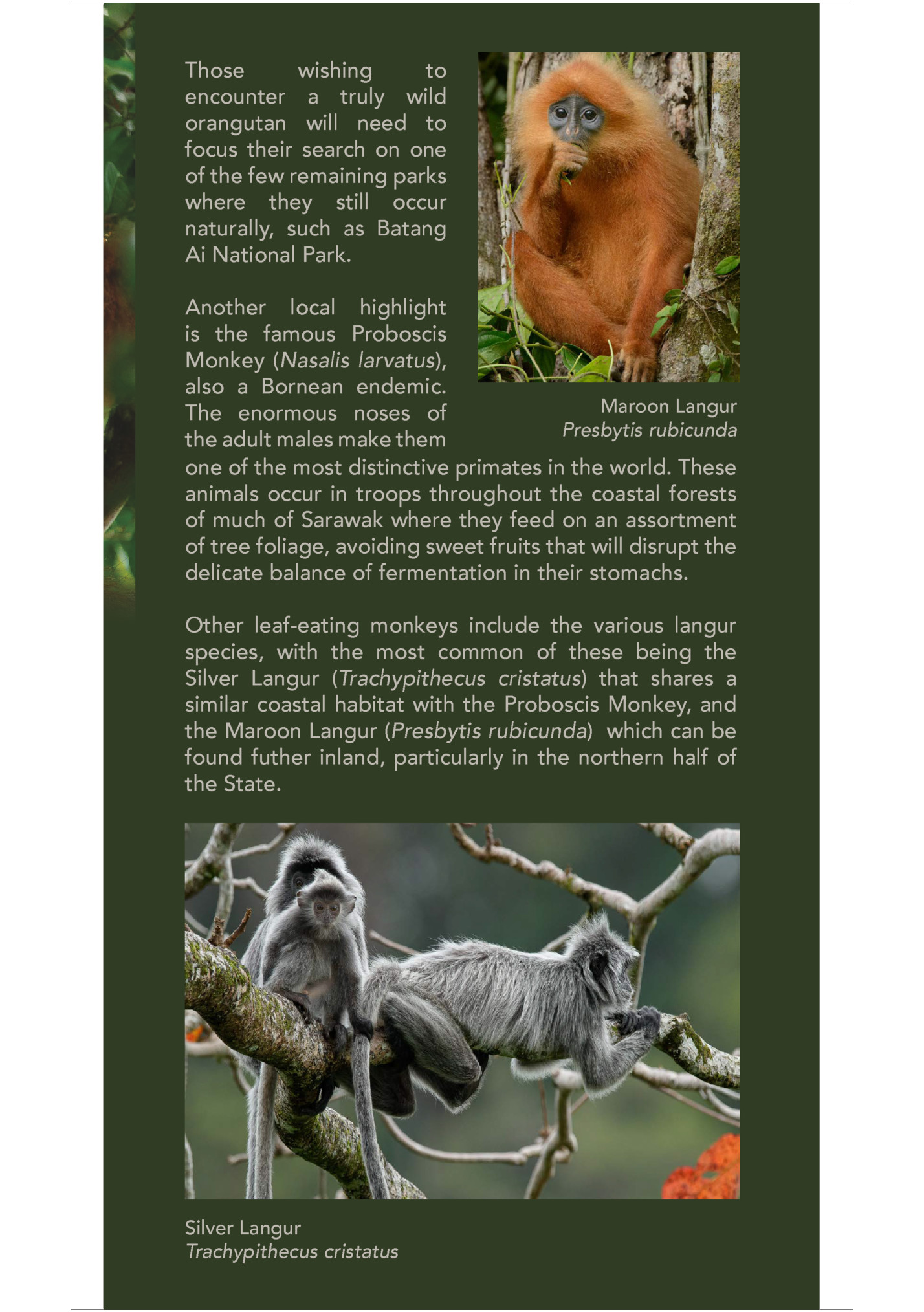 Sarawak Langur (Presbytis chrysomelas) is one of the world’s most threatened primates; it can be seen in Sarawak reliably only at Tanjung Datu National Park. One of the best locations to view a variety of mammals in Sarawak is the famous Bako National Park. Located on a rocky peninsula near the capital of Kuching, Bako provides excellent Long-tailed Macaque viewing opportunities Macaca fascicularis for many species which are shy or scarce elsewhere. Here, Proboscis Monkeys and Silver Langurs feed throughout the day within the beach forest, unafraid of the close proximity of wildlife watchers. A third species of monkey, the Long-tailed Macaque (Macaca fascicularis), is also in abundance and is more commonly known for its mischievous behavior: many have learned how to steal food from unsuspecting tourists. A careful look around the forest in Bako often reveals sleeping Sunda Colugos (Galeopterus variegatus); at dusk they become active and glide from tree to tree. Sunda Colugo Galeopterus variegatus 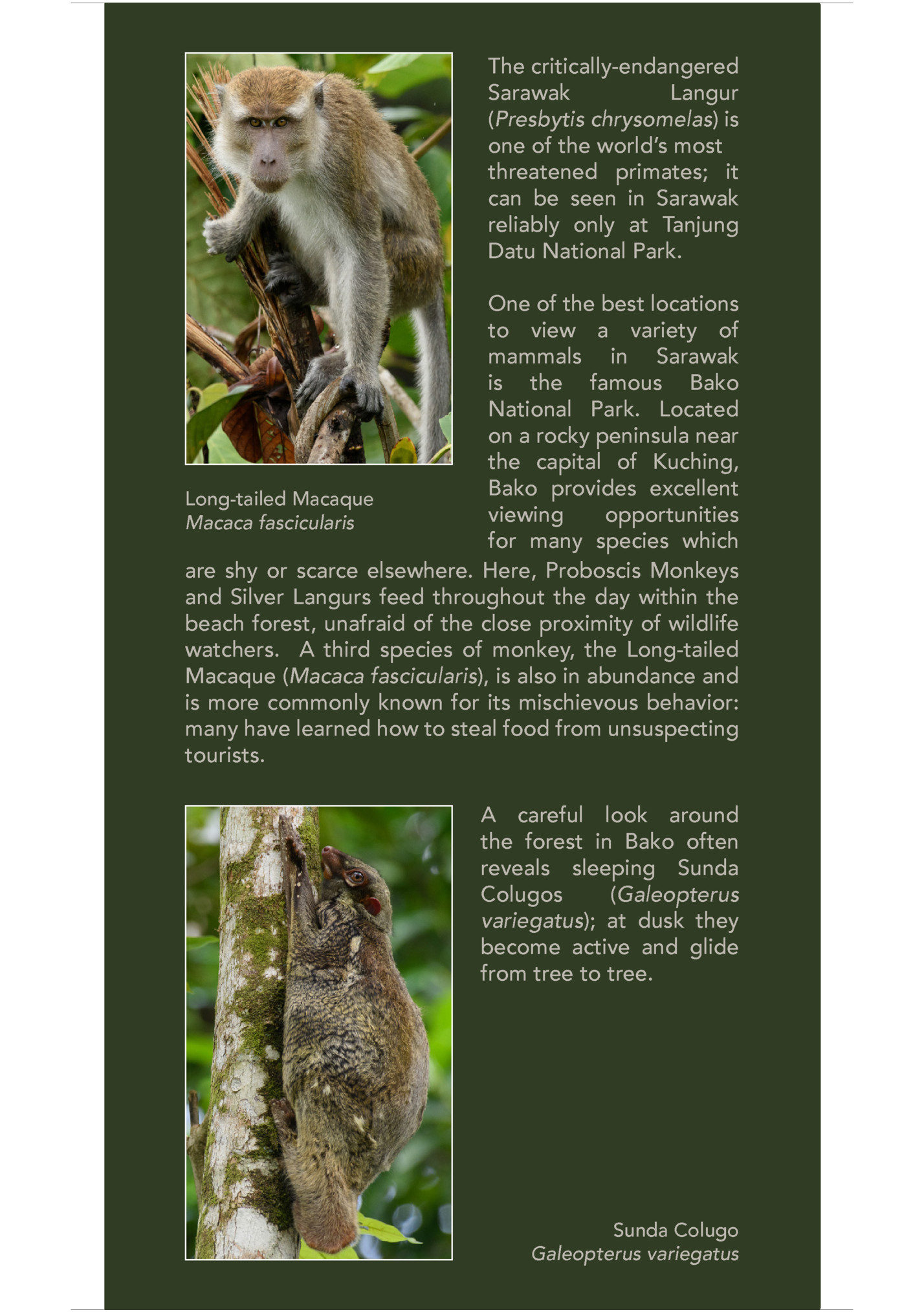 Sus barbatus Bornean Bearded Pigs (Sus barbatus) can be seen here as well, leaving behind upturned earth wherever they have been foraging. One of Sarawak’s most treasured wildlife spectacles is the swarm of Wrinkle-lipped Bats (Chaerephon plicatus) that emerge from Deer Cave in Mulu National Park at dusk. With an estimated 3 million bats, their mass exodus usually takes the form of spiraling rivers in the sky and is clearly audible from a distance. Wrinkle-lipped Bats Chaerephon plicatus 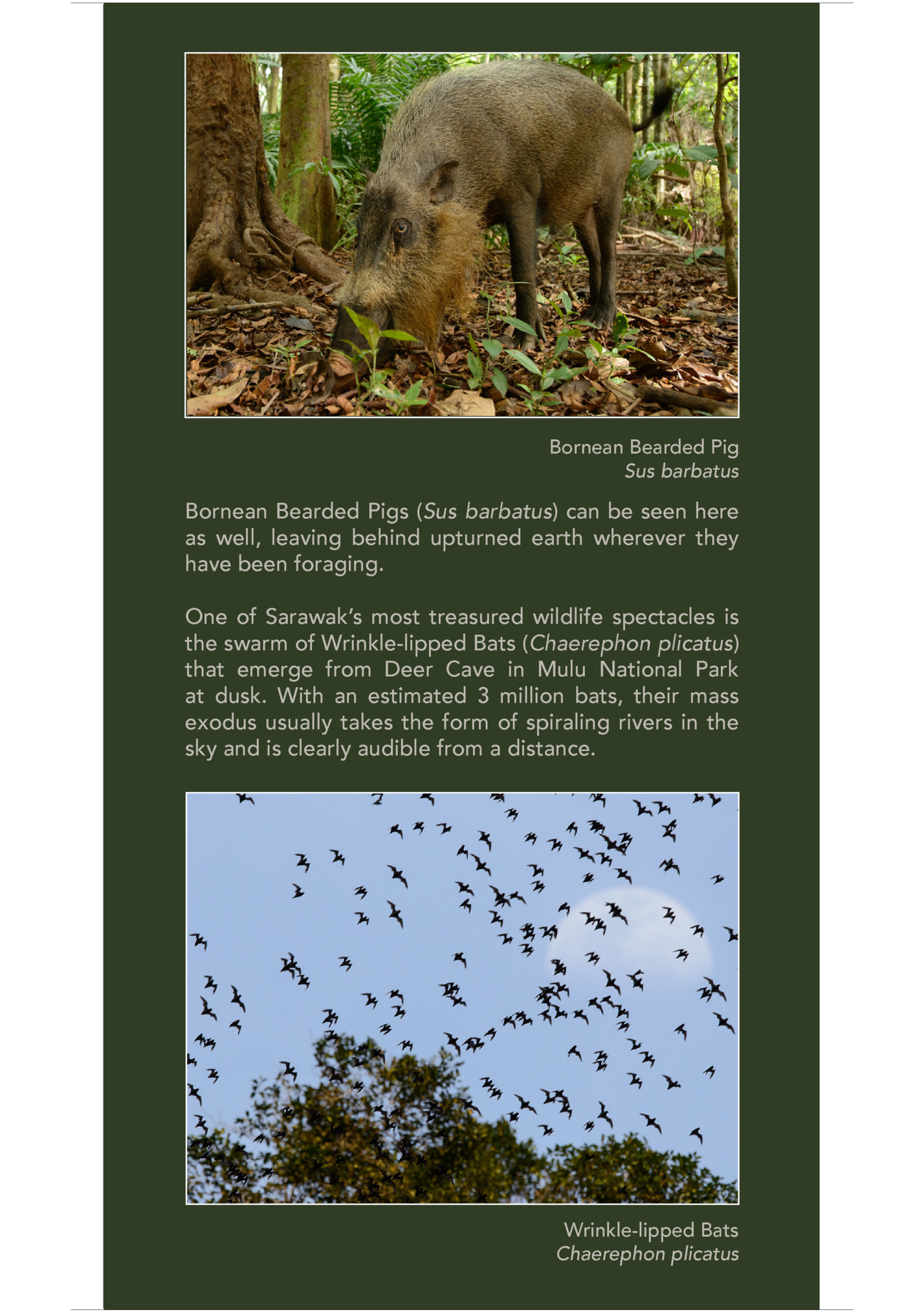