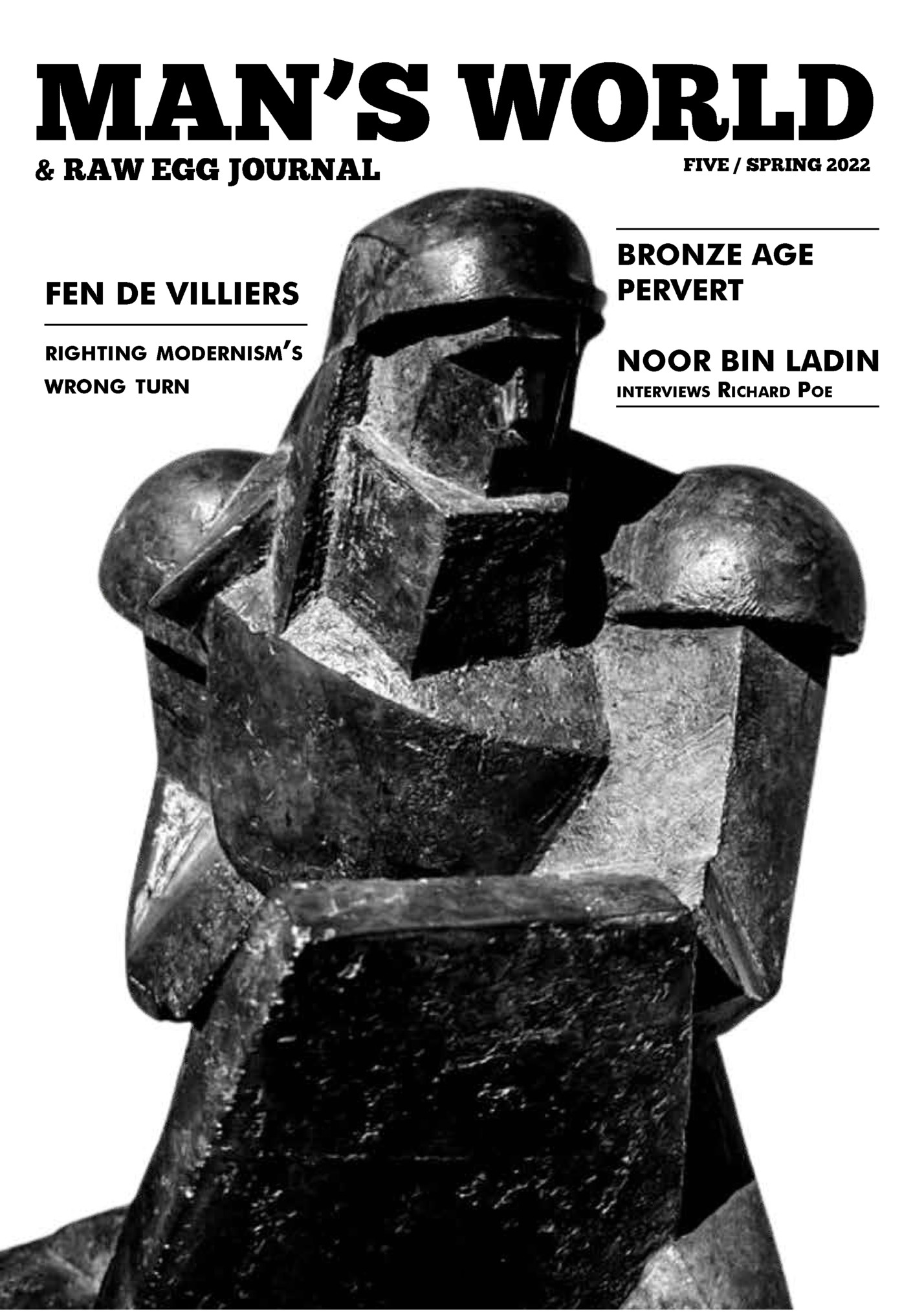 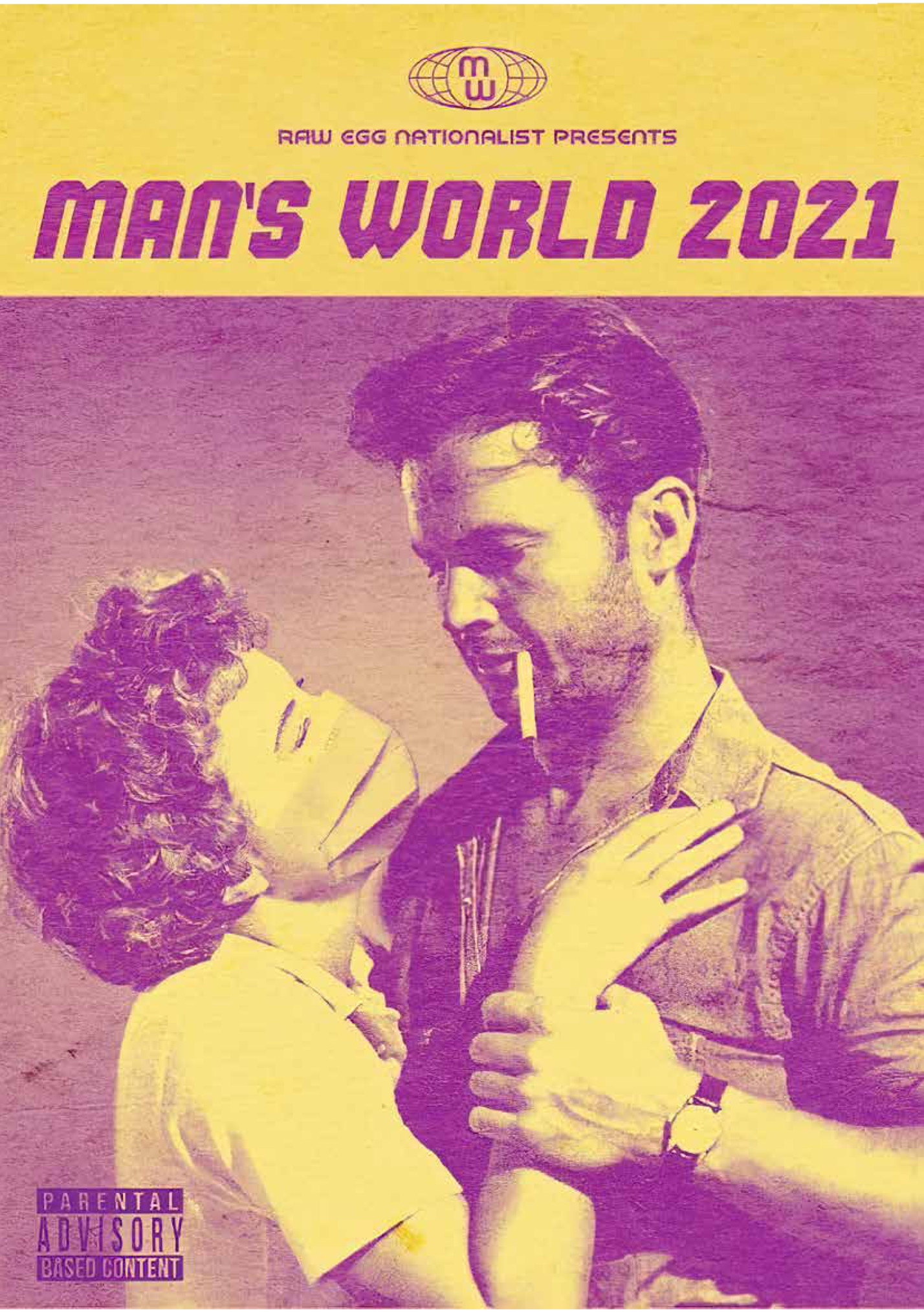 RETURN TO THE GOLDEN AGE OF MEN’S

MAGAZINES WITH MAN’S WORLD: WHERE MEN CAN BE MEN – NO APOLOGIES GIVEN! Founded in late 2020 by the Raw Egg Nationalist, MAN’S WORLD has one simple aim: to make men’s magazines great again. Here, in the first ever annual, the Raw Egg Nationalist presents the best material from the year’s four ground-breaking issues, together with exclusive, new articles and classic, annual content like games, trivia, and a whole lot more. 200 pages of the finest masculine content, featuring essays and articles by Bronze Age Pervert, Zero HP Lovecraft, Faisal Marzipan and many more of the finest writers on the right side of Twitter. Available now from antelopehillpublishing.com 3 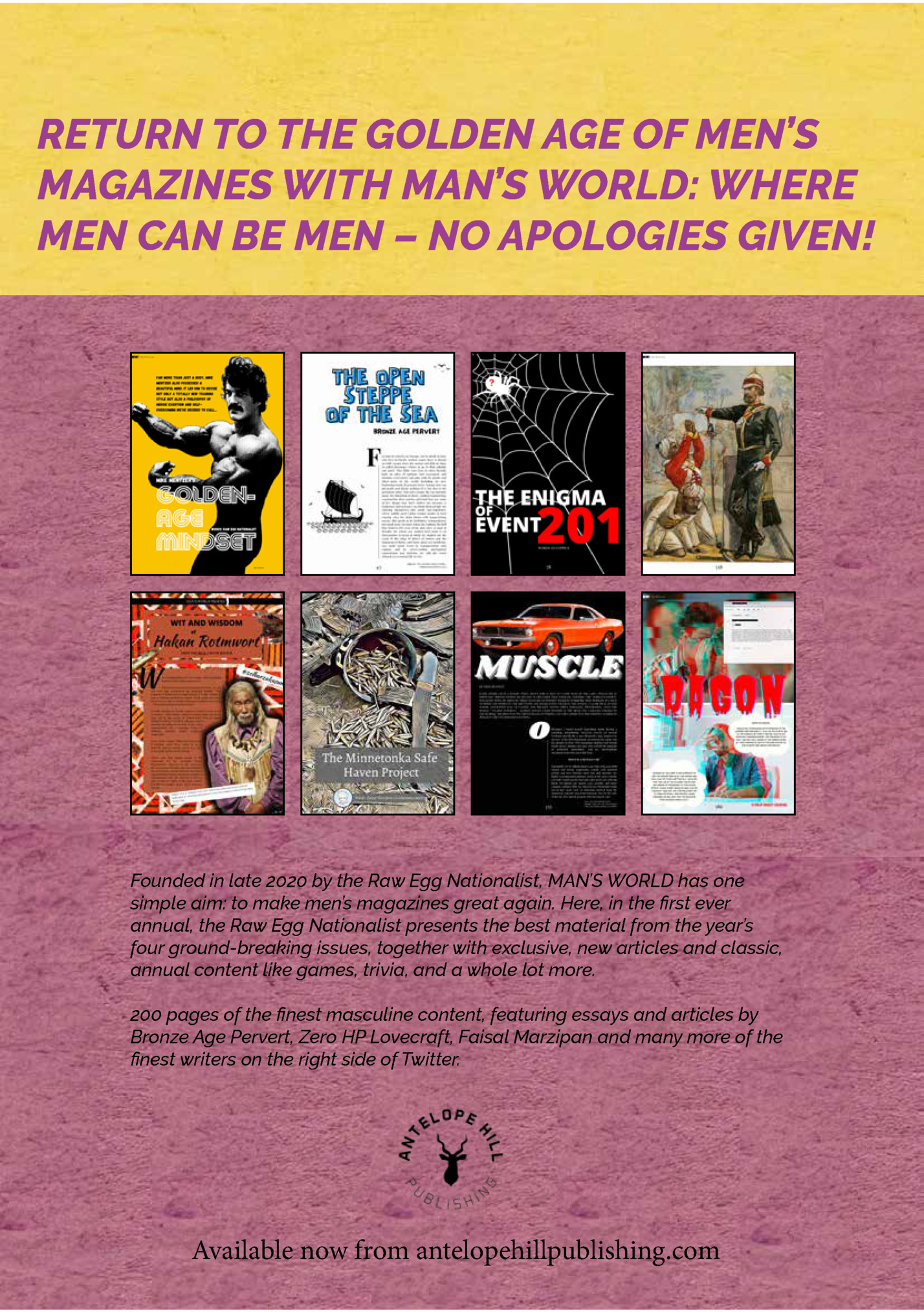 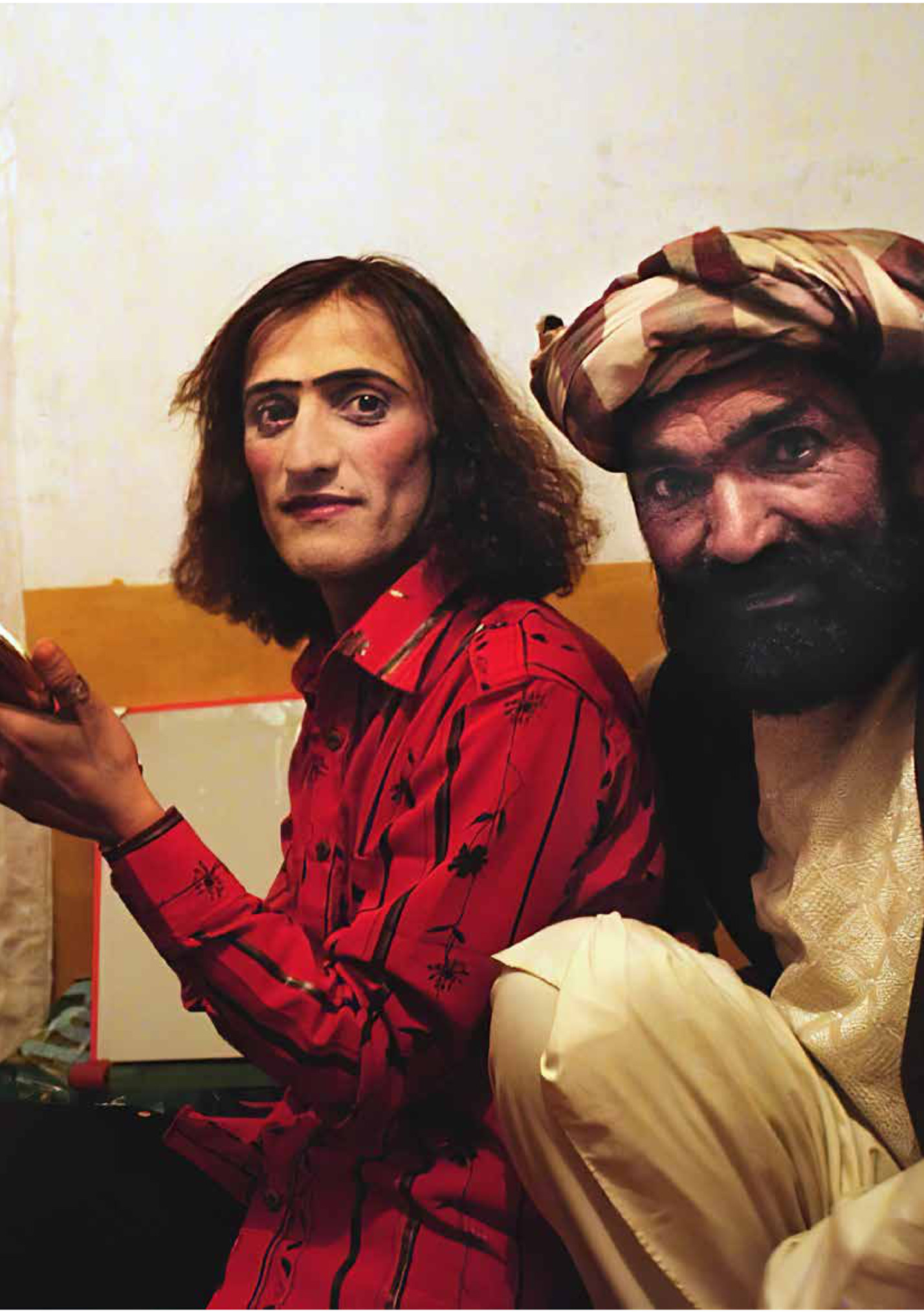 URGENT APPEAL FOR THE TEA BOYS OF AFGHANISTAN Once again, here at MAN’S WORLD we are coming to you with an urgent appeal on behalf of the beleaguered people of Afghanistan. In addition to the ongoing plight of the country’s female content creators, a second humanitarian crisis is rapidly developing that cuts right to the heart of America’s sacred mission to bring its own brand of sexual freedom to the rest of the world. Bacha bazi, meaning “boy play”, was once a pervasive practice throughout the tribal areas of Afghanistan. Young boys, known as “chai boys” (tea boys), would explore their sexuality with the aid of one or more obliging Pashtun tribesmen. These entirely consensual explorations would often take place in a festive atmosphere - the chai boys would usually cross-dress - at parties attended by dozens of men who would help the young boys find themselves over many hours and sometimes even days. When the Taliban came to power, however, this timeless, valuable educational practice was brought to a swift end. Legend has it that Mullah Omar was actually inspired to form the Taliban when he came across two local warlords teaching a young tea boy. The bigotry that inspired Omar was defeated by the American-led invasion, and the subsequent twenty-year occupation became a golden age for bacha bazi, paid for by American taxpayer dollars and the blood of its finest young men. America’s noble intelligence services also did their part, providing a constant supply of Viagra to Afghan warlords to ensure the boy play could continue nonstop (really: Google it). But now that the Taliban are back in power, the tea boys are once more out of work and in mortal danger of trans erasure. Pictured left in happier times is “Daniel”, a former tea boy who was forced to flee the capital Kabul after Joe Biden’s shameful withdrawal. He has since relocated to Arizona, where he’s making ends meet by plying his former trade as well as providing nutritional advice on Twitter and Instagram. His dream, he told us, is to be able to return to Kabul while he is still a child, so that he can once again pursue his vocation in the place he calls home. WILL YOU HELP HIM REALISE HIS DREAM BEFORE IT’S TOO LATE? REMEMBER: A THREAT TO CHILD SEX ANYWHERE IN THE WORLD IS A THREAT TO CHILD SEX HERE. THIS IS ABOUT MORE THAN JUST “LOCAL CULTURE”: THIS IS ABOUT GLOBAL FREEDOM. LOVE IS LOVE! “If Afghanistan’s leaders aren’t free to have sex with little boys, how can America’s claim to be free to do so themselves?” Holden Bloodfeast (R, Iowa), proud sponsor of the MAN’S WORLD Urgent Appeal for the Tea Boys of Afghanistan M W the finest masculine content since 2020 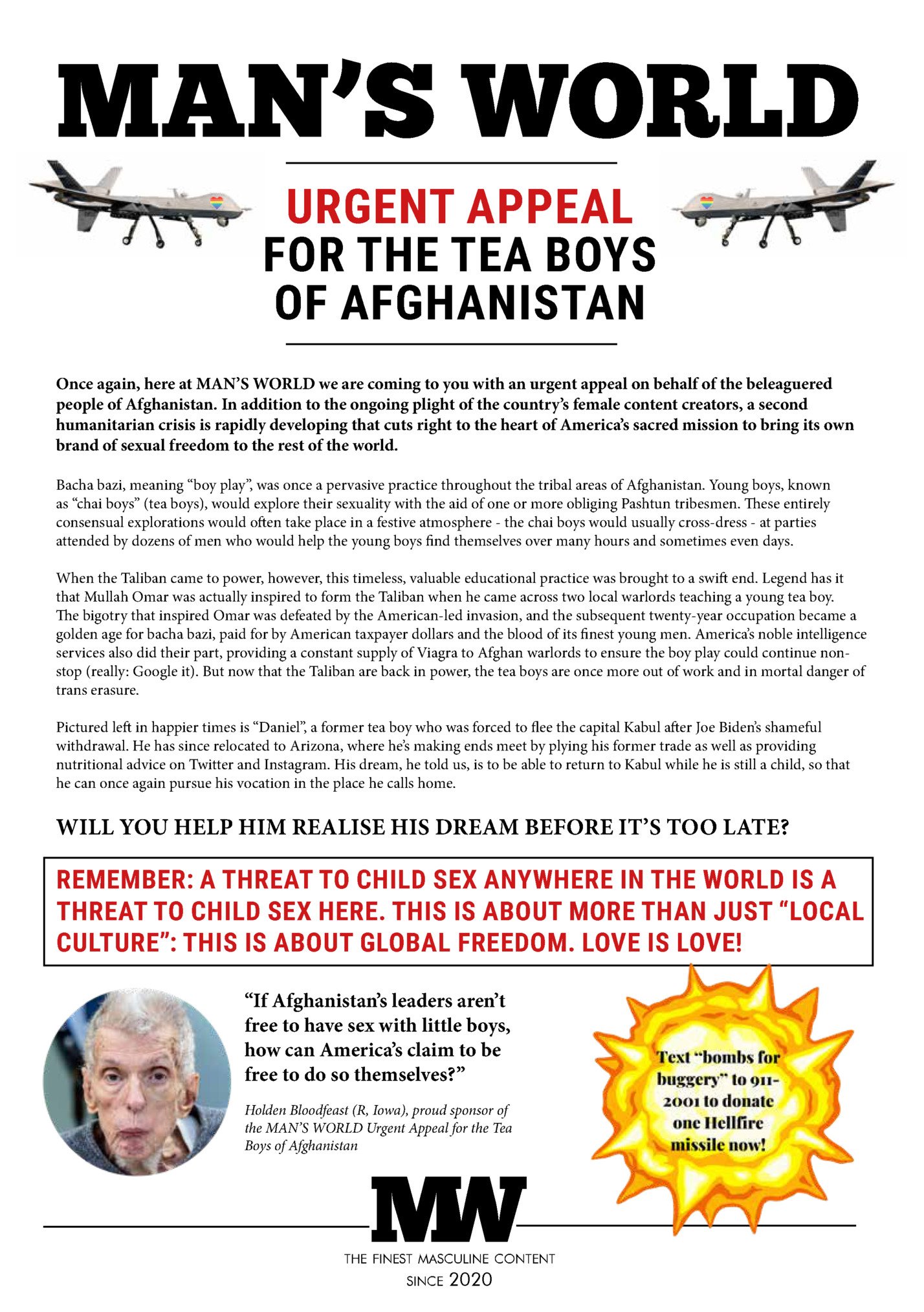 Dora the Stormer, “The Wild Hunt” 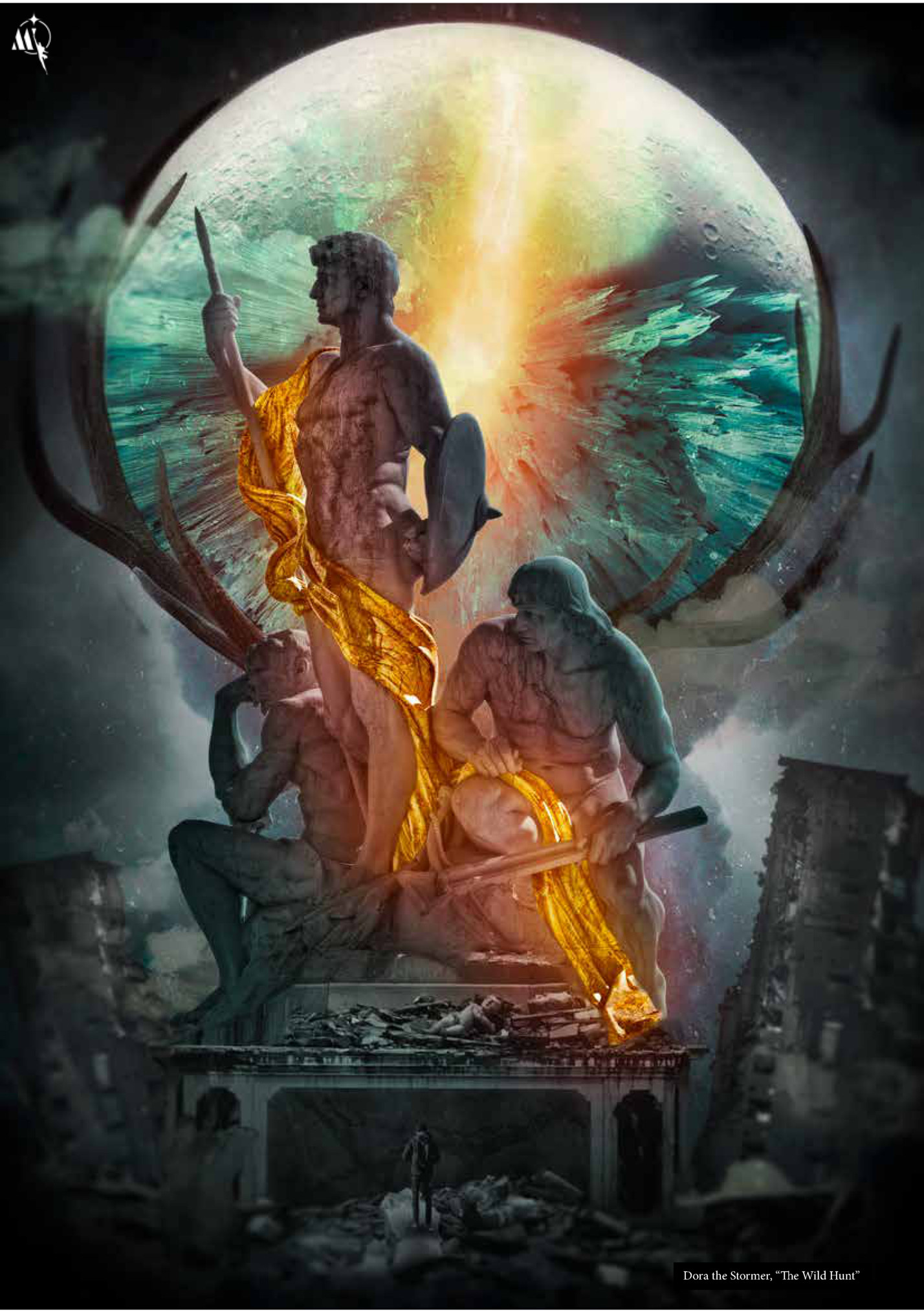 To have a DESTINY or to be

DESTINY, classified as a NUMBER— this DECISION is forced upon all of us today, and each of us must face it ALONE. The individual today is as SOVEREIGN as an individual in any other period of history, perhaps even STRONGER, because as collective powers gain ground, so the individual is SEPARATED from the old established associations and must STAND FOR HIMSELF alone. He becomes Leviathan’s ANTAGONIST, indeed his CONQUEROR and his TAMER. ~Ernst Jünger, The Forest Passage 7 MAN’S WORLD ISSUE 5 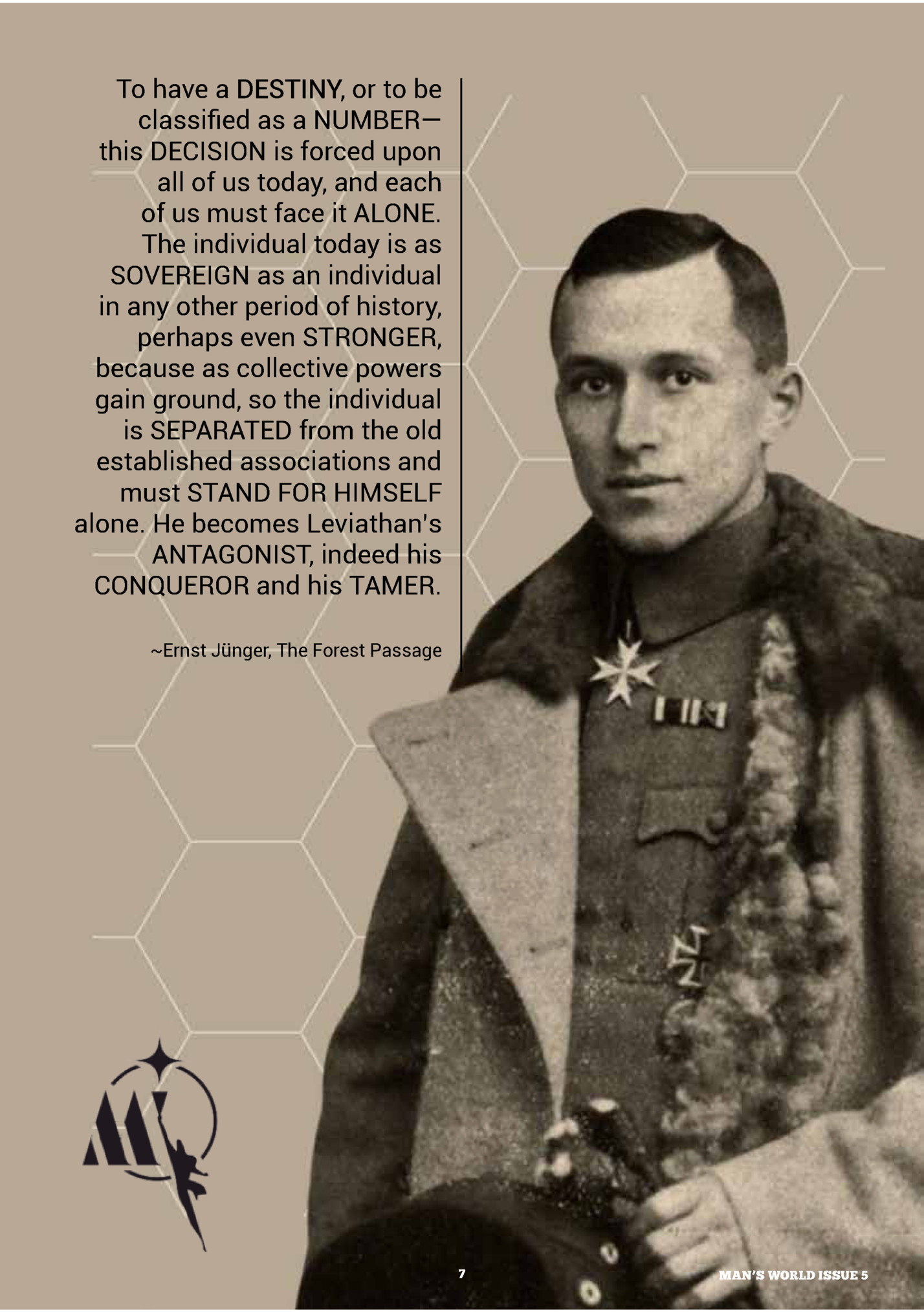 It’s a new year and a new issue of MAN’S WORLD, the finest men’s magazine around. And who better to welcome you back than your editor, and humble fren, the Raw Egg Nationalist? H ere we are, one year, four issues and an amazing hardcover annual later. MAN'S WORLD continues to go from strength to strength, and it's thanks to you, the readers and the contributors. So please, give yourselves a pat on the back. You've earned it! Each new issue brings with it the promise of unprecedented amounts of content, and this fifth issue certainly won't be bucking that trend. As always, it gives me great pleasure to disappoint my detractors and serve you a most sumptuous array of the choicest cuts from the biggest and the best on the right side of Twitter (and history). At almost 300 pages, this is the most stacked issue yet - nearly one hundred pages more than the last. If things continue to escalate at the current rate, you can expect Issue Ten to be a thousand pages... (Please don't hold me to that.) So what do we have in store for you? The return of the inimitable BRONZE AGE PERVERT! A stunning showcase for the work and philosophy of visionary artist FEN DE VILLIERS. A fantastic original story by DETECTIVE WOLFMAN, "Heartsfire". A fascinating interview feature with NOOR BIN LADIN and RICHARD POE. Food, fitness, wahmen, politics, history, cars, film and so, so much more. @babygravy9 MAN'S WORLD Issue Five is a veritable cornucopia, a feast for the intelligent and handsome new man of the right. WANT TO WRITE FOR MAN’S WORLD? or even a new section or regular feature, don’t hesitate to get in contact either by tweeting @ babygravy9 or sending a direct message. Here at Man’s World, we’re always looking for new contributors to dazzle, inform and amuse our readership, which, after four issues now stands at well over 150k. Generally, the word limit for articles is 3,000; although we will accept longer and (much) shorter articles where warranted. Take a look at the sections in this issue for guidance and inspiration. If you have an idea for an article, of any kind, MAN’S WORLD ISSUE 5 8 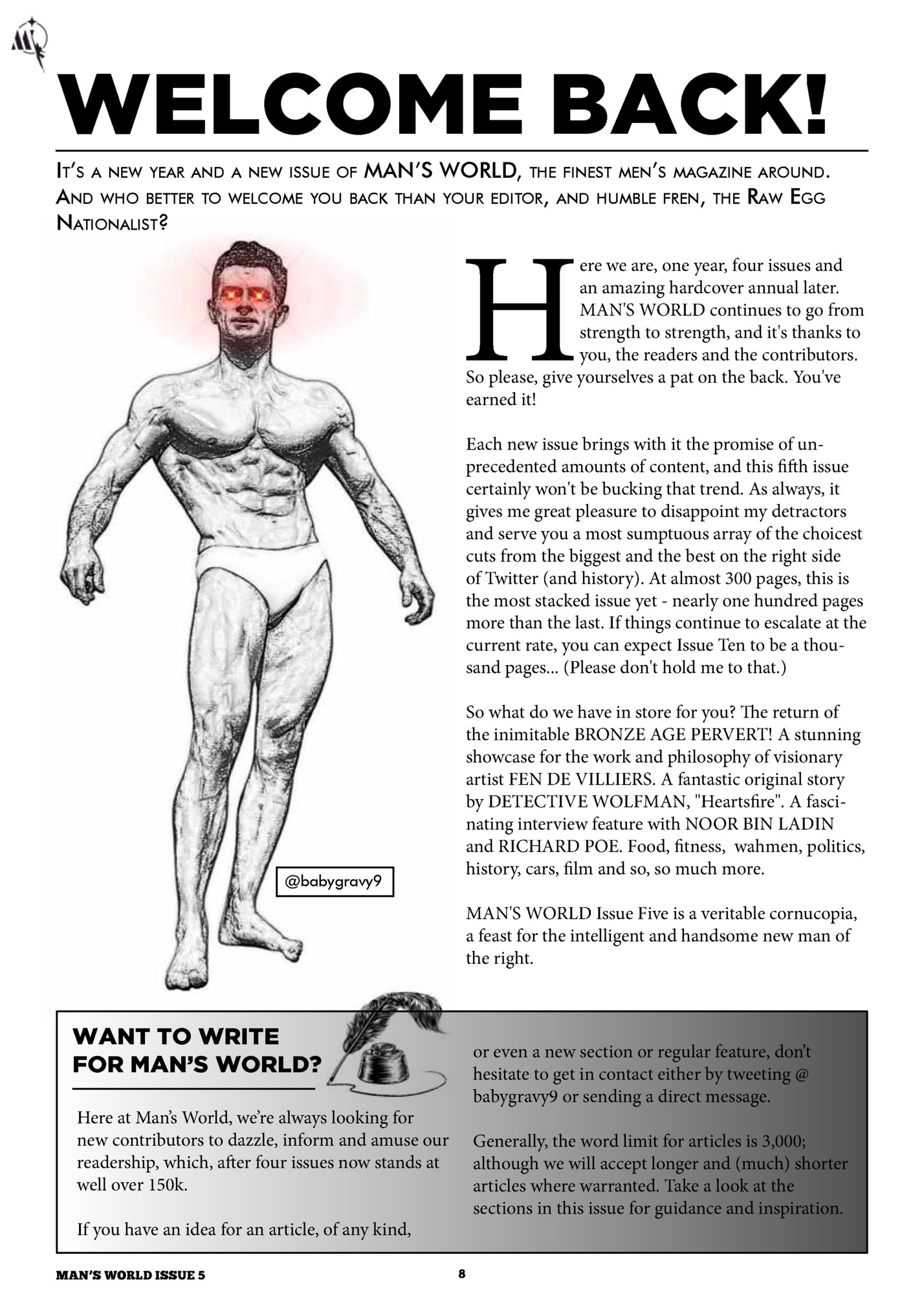 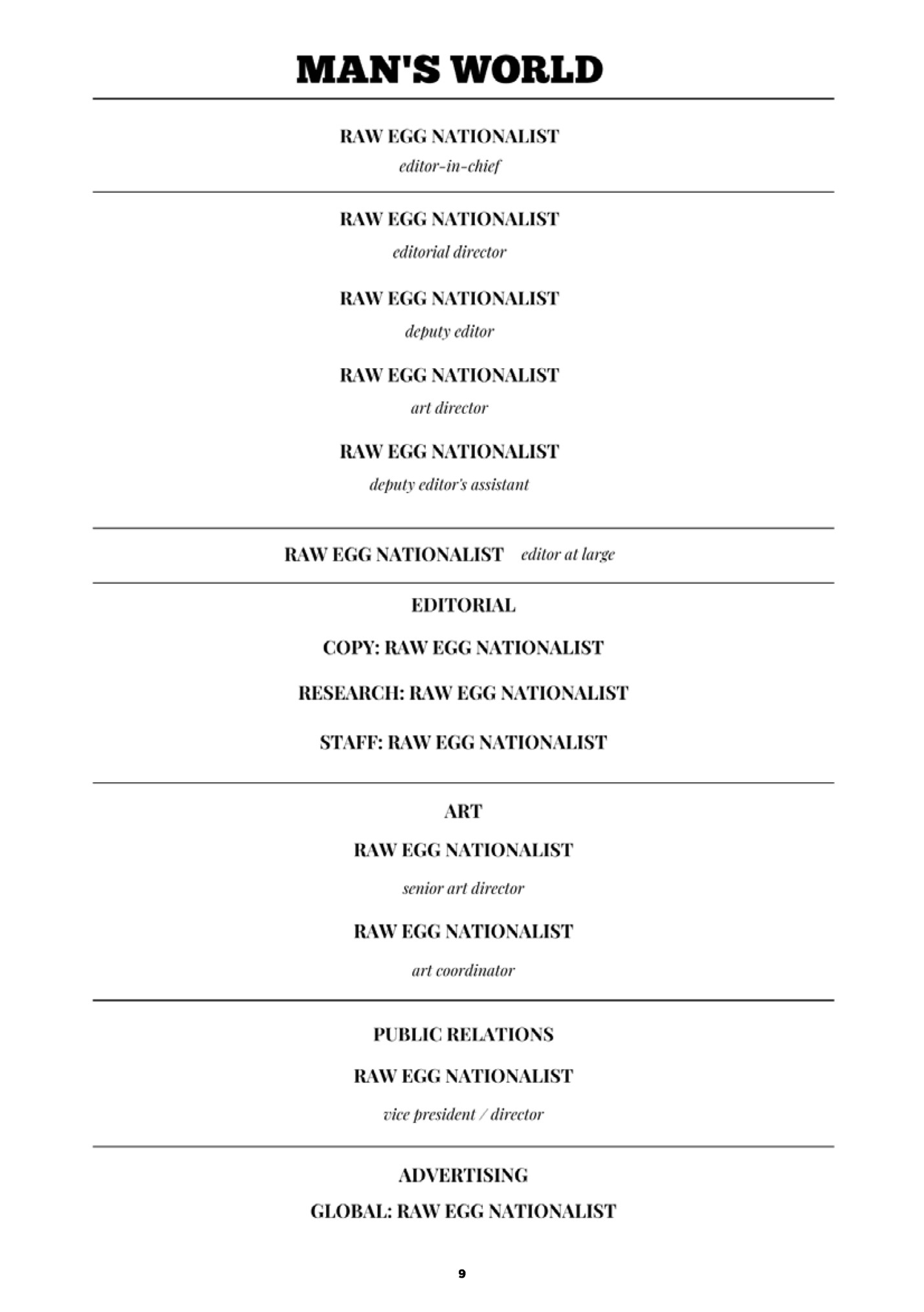