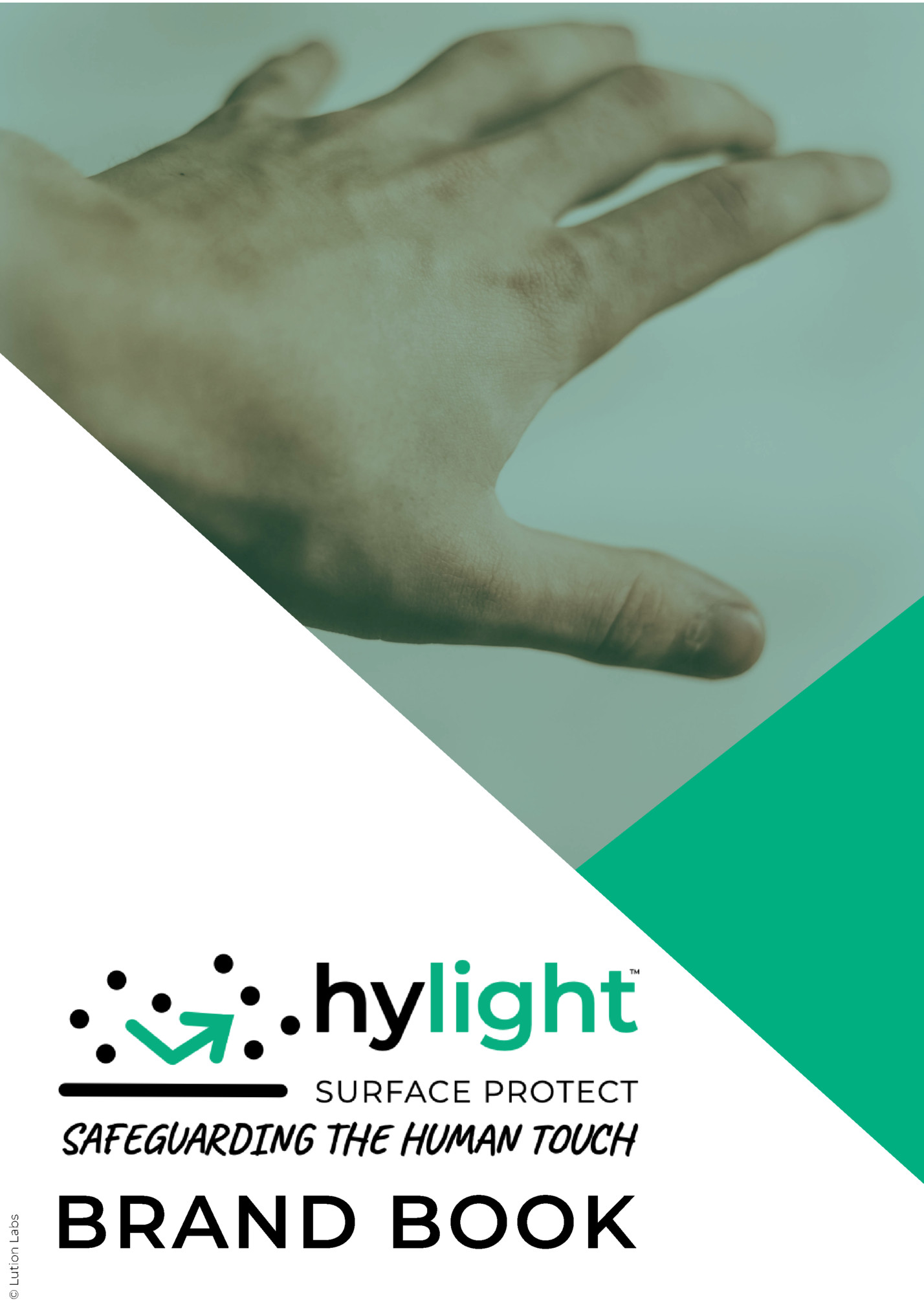 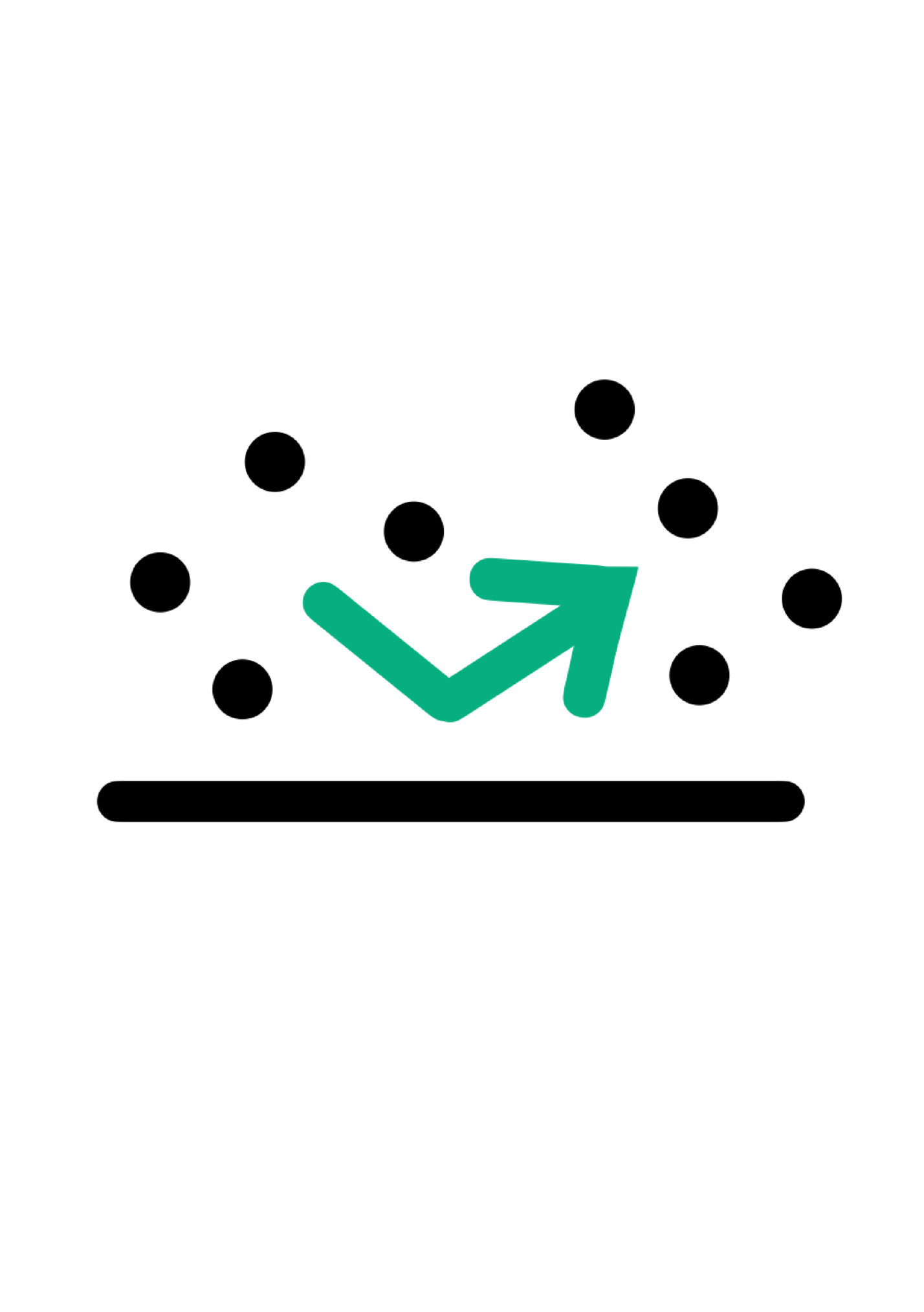 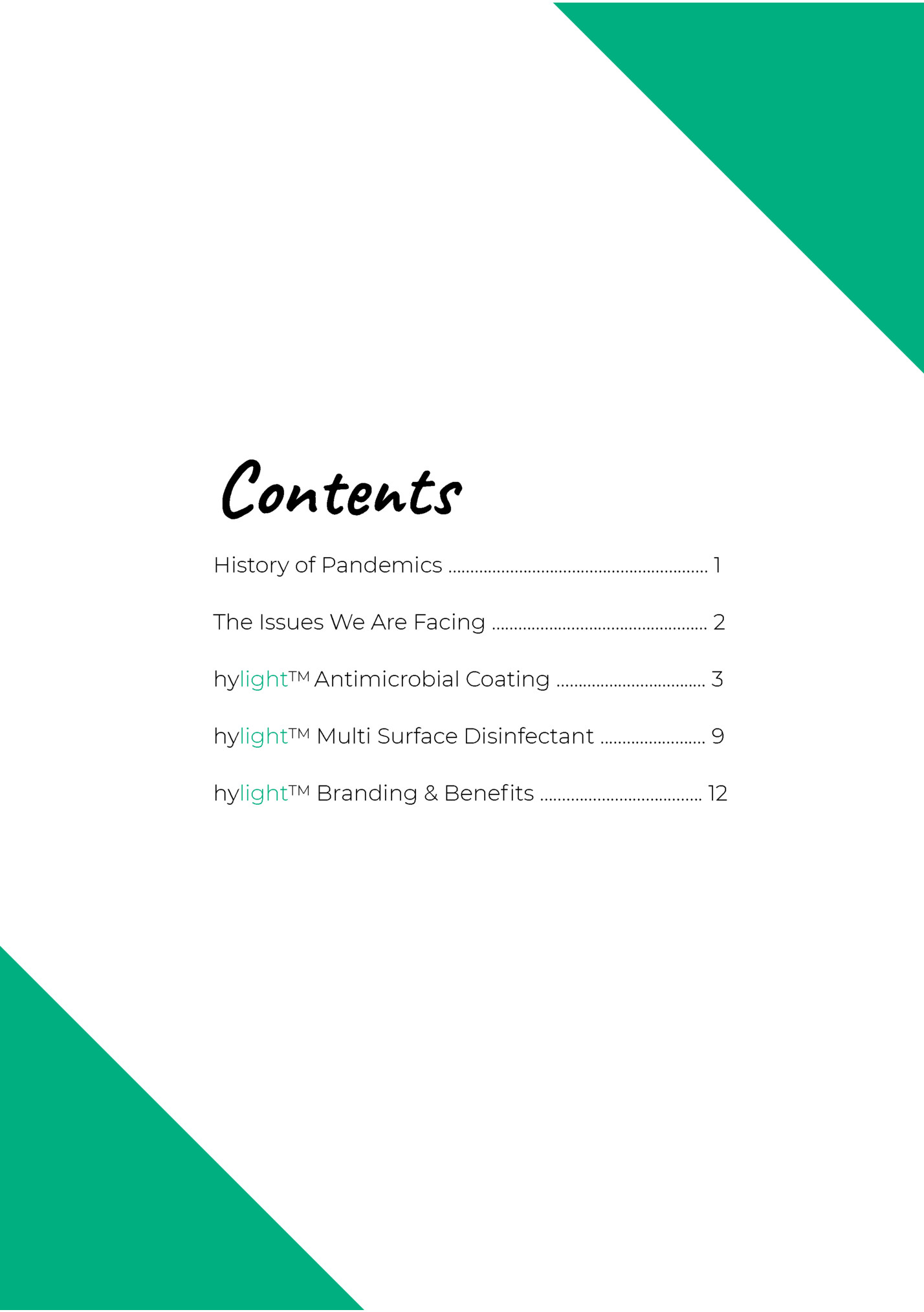 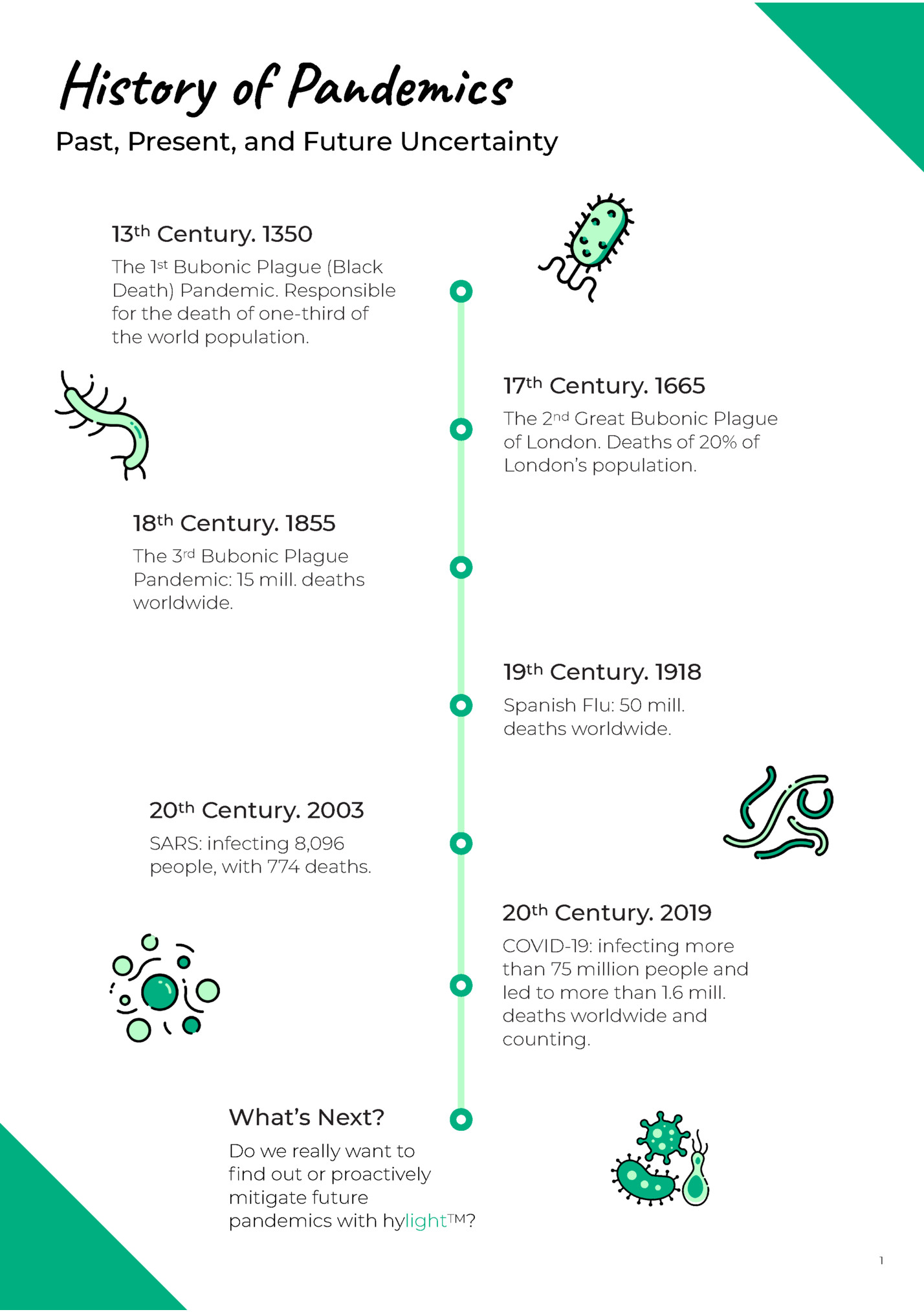 Like so many other microbes, there are good and bad bacteria. Bad bacteria such as Listeria, MRSA, E. coli, and Salmonella not only cause health complications, but can have an impact on the reputation of your business. Viruses More relevant than ever, hylightTM continuously protects against viruses on treated surfaces without use of toxic chemicals or disinfectants. Mold In nature, mold is necessary to help decompose dead organic material. However, mold poses signi cant challenges in building environments. Besides unpleasant odors and costly renovations, there are serious health risks involved in living and working in mold-infested environments. VOC’s hylightTM reduces air pollutants, including volatile organic compounds (VOC’s). VOC’s are “off-gassed” by many of the furnishings found indoors. Formaldehyde, ethanol, and acetone, to name a few, are effectively decomposed with hylightTM surface protection technology. fi n ac ue ses 2 The I s We Ar F i g 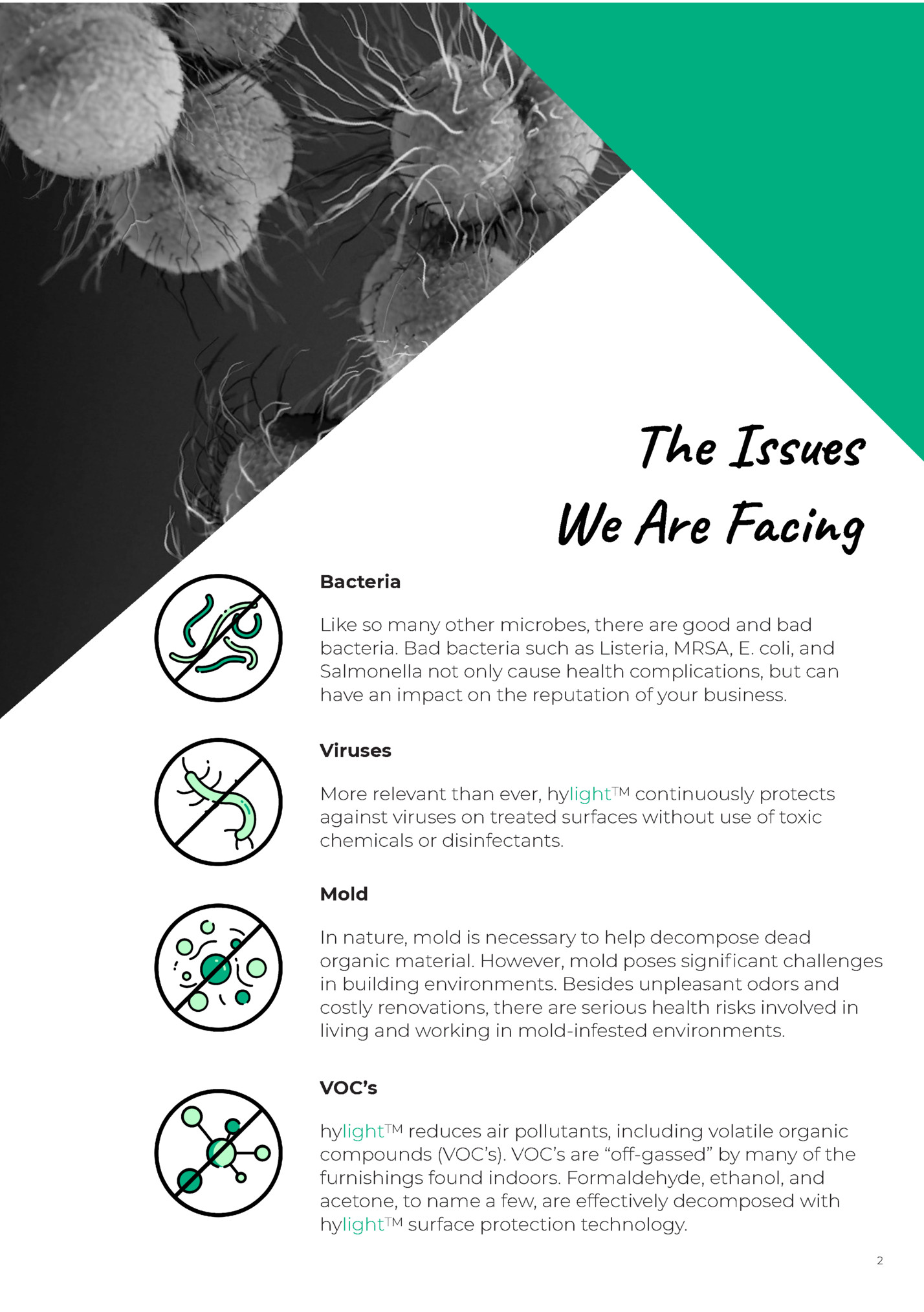 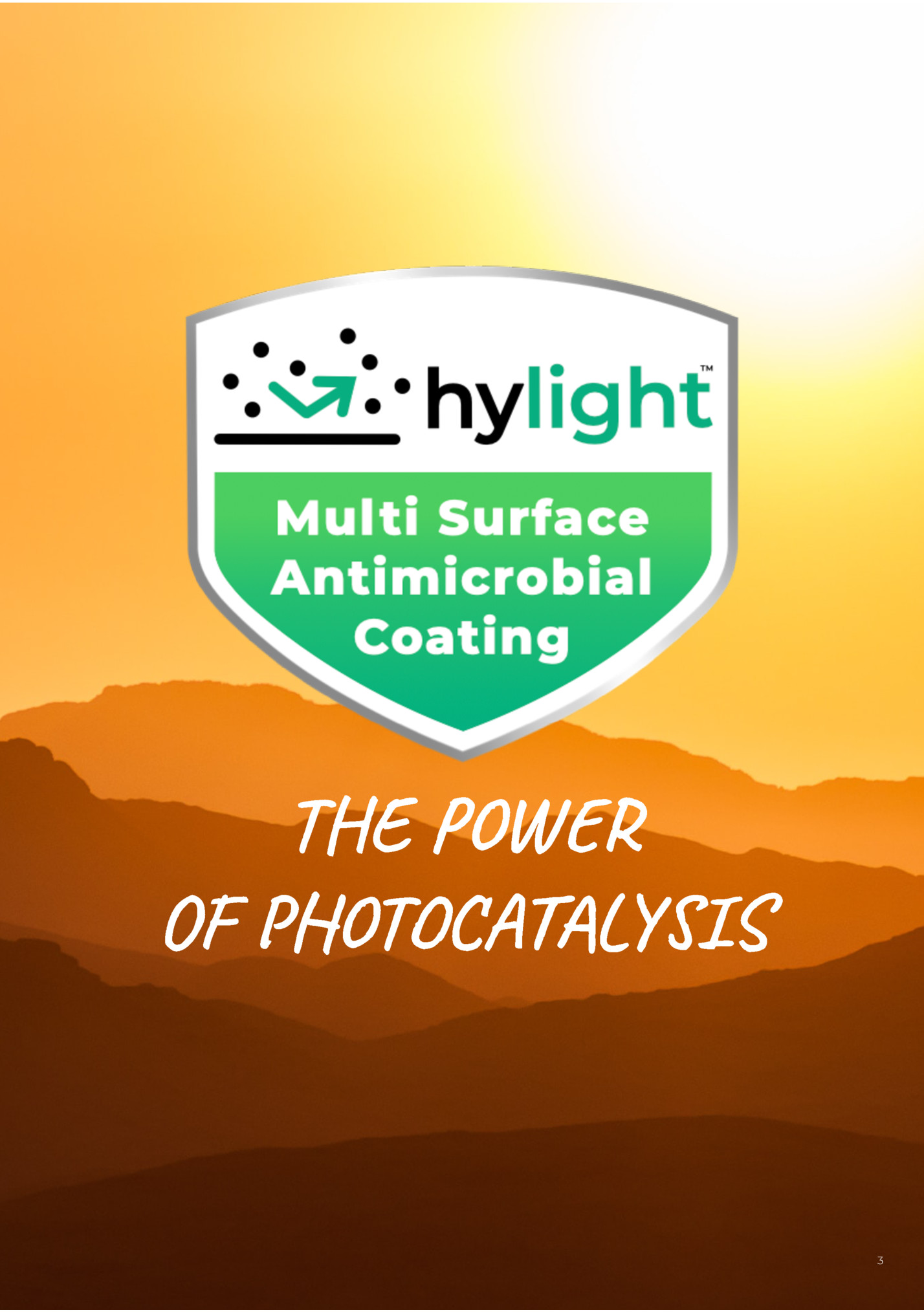 T In od Sur Pro g t Long-Lasting Antimicrobial Surface Protection At Lution Labs, our overriding purpose is to protect the health and well-being of the human family, as well as our collective home, planet Earth. From harmful microbes to damaging organic chemicals, we studied nature’s own disinfection methods, creating an effective and sustainable solution that we call hylightTM Surface Protect.  Principally, hylightTM creates hydroxyl three times stronger than chlorine, 1.5 times stronger than ozone, and is considered non-toxic. By implementing the hylightTM  technology, you will achieve sustainable, best practice protocols. ✓ Renders applied surfaces selfdisinfecting hylightTM Surface Protect photocatalyst coating is a ‘hygienic surface protection’ coating technology. It protects surfaces from microbes like bacteria, fungi, parasites, and germs. Developed to control the growth of pathogens on applied surfaces and airborne VOC's, our photocatalyst coating decomposes the bacteria cell with the like hydroxyl effect of hydrogen peroxide, without the need for repeated application. ✓ Developed to control the growth of pathogens such as bacteria, viruses, mold, and airborne VOC’s by visible light ✓ Approved for use on all surfaces including direct food contact ✓ Non-rinse claim as it does not cause bacterial resistance over time ✓ Puri es air improving indoor climate c ✓ Transparent, non-toxic, and odorless te e ac f fi n ci M tu rh fi ytl The cell is denatured and decomposes into carbon dioxide, water, and minerals which are wiped away with simple, routine cleaning. The Titanium Dioxide (TiO2) and Silicon Dioxide (SiO2) is not "sacri cial", meaning it does not deteriorate and offers a long-term anti-bacterial effect. 4 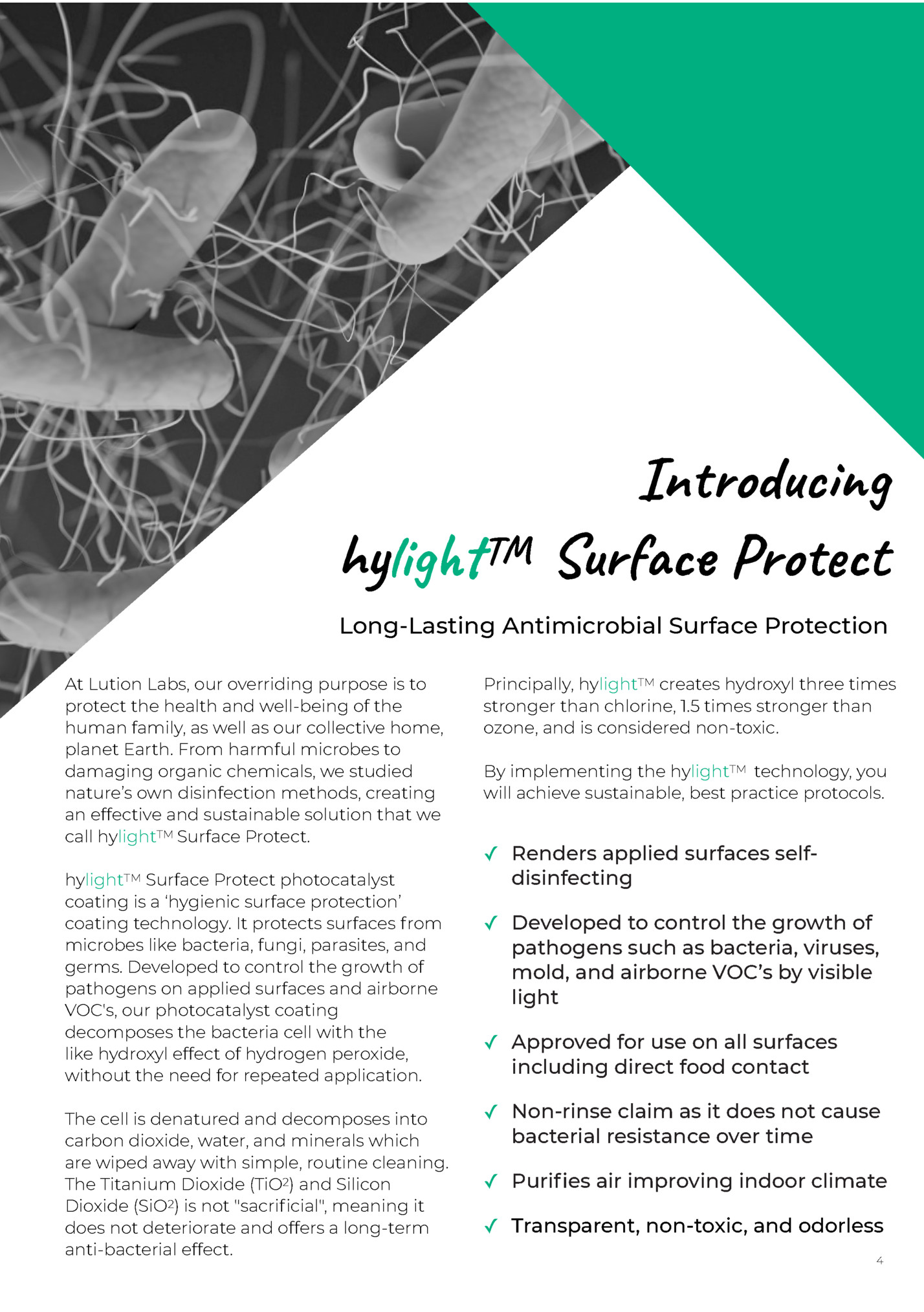 ta t O da ? Pho Oxidative decomposition occurs when Titanium Oxide (TiO2) is exposed to light; organic substances on its surface will be broken down by oxidation, eventually forming carbon dioxide and water. This has applications in elds such as deodorization, elimination of volatile organic compounds (VOC’s), elimination of soiling, antibacterial action and sterilization. on ti fi xi ic ly cias tto 5 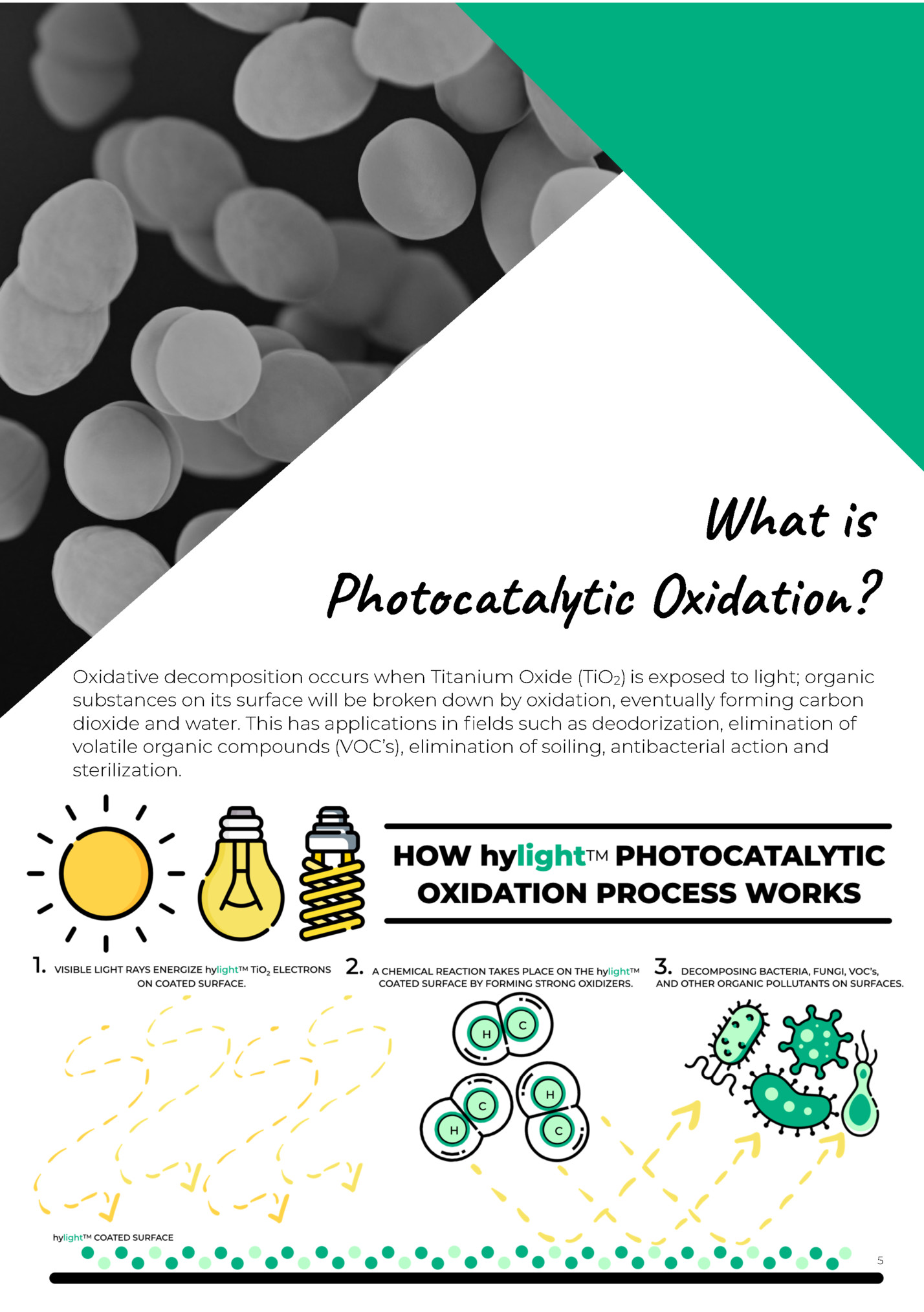 Sel -Dis c i g Sur Pro t o hylightTM is engineered to proprietary speci cations, providing the highest ef cacy of photocatalytic, superoxide hydroxyl creation activity. The coating is transparent and odorless and can be applied to all surfaces. Once exposed to light, it starts a photocatalytic reaction that decomposes microbes and puri es the air. hylightTM is approved for use on surfaces with direct food contact and has a non-rinse claim as it does not cause bacterial resistance over time. The key ingredients in hylight™ is Titanium Dioxide (TiO2) and Silicon Dioxide (SiO2). Naturally occurring compounds which has a wide range of applications such as a paint pigment, toothpaste, sunscreen ingredient, and food and drug additive. The hylight™ process utilizes humidity and oxygen, creating free radicals in presence of light. When TiO2 and SiO2 is exposed to light, electron-hole pairs are generated. These electron-hole pairs migrate to the surface, creating free radicals. In the absence of light hydrophilic properties of hylight™ “hold” the pathogens to the surface. Once light is introduced, then the hydroxyls react with the surface and viruses, for example, are denatured in under 30 seconds. The free radical generation continuously decomposes bacteria, viruses, and VOC’s for the service life of the coating. Long-Lasting Visible Light Effective Against Protection Activated Microbes Active Day and Night Odorless and Non-Toxic Durable and Ef cient n i cn te t oef snf ei ac ff fi fi fi fi 6 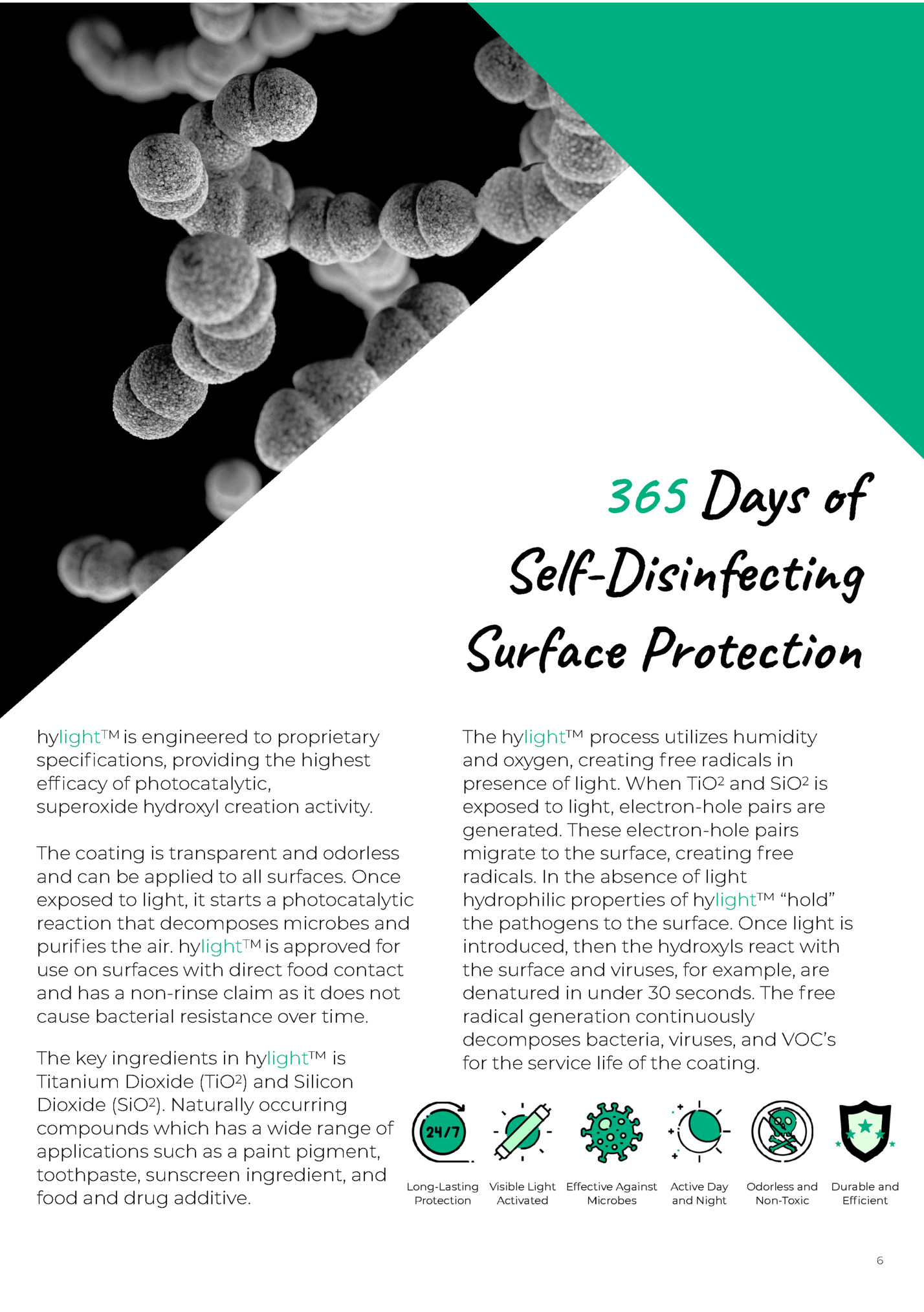