The Love of a Sultan 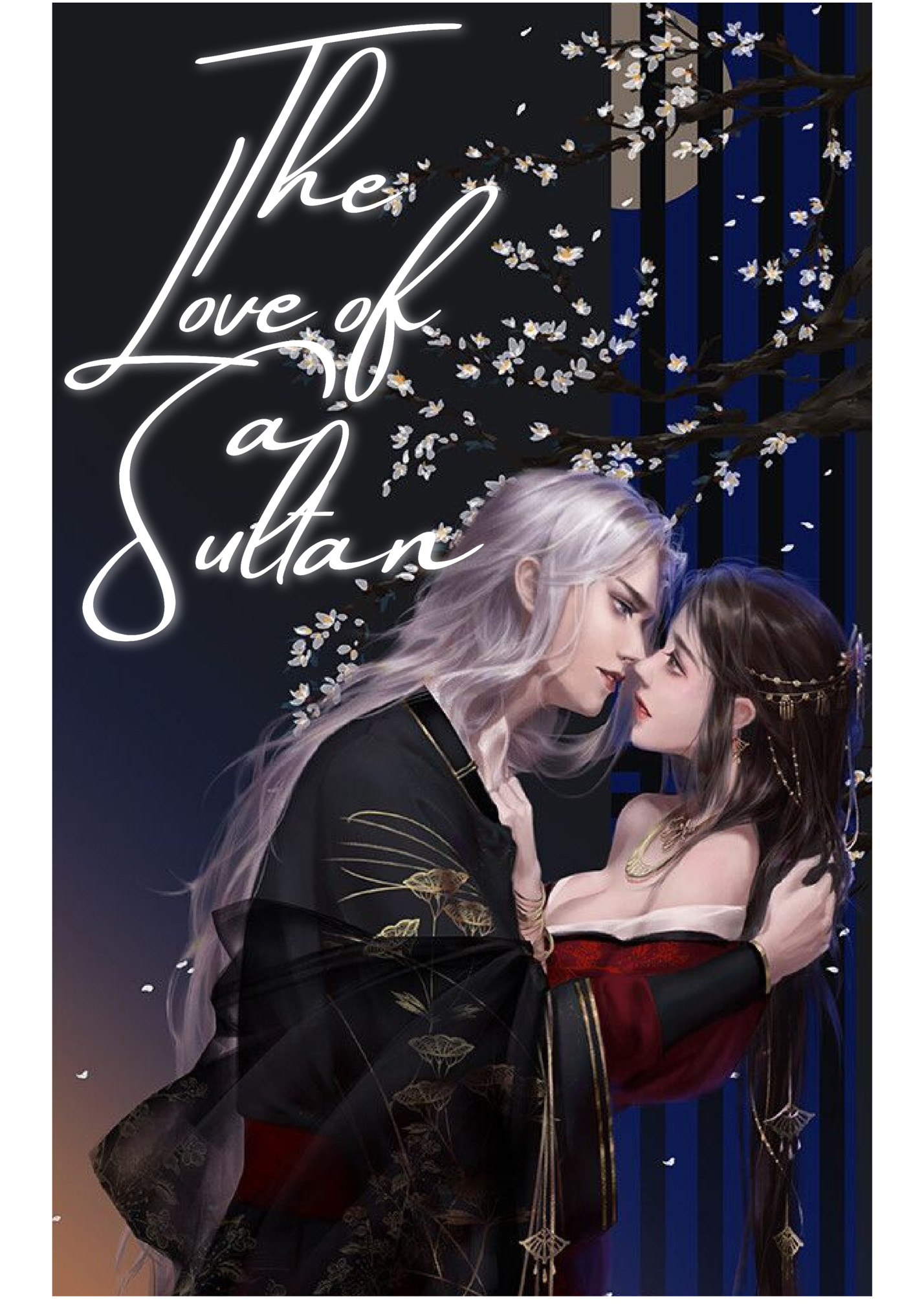 The scent of an unwashed body hit her nose and turned her stomach inside out. It felt like her head was filled with hazy smoke, to the point that it was hard for her to remember where she was. Her slender ankle, writhing, was caught by a large hand and her legs were forced to open. How did this happen? Ellie bit her lips until it bled. She hoped the pain would help her come to her senses. *** Ellie's parents were part of a nomadic tribe. They were people who moved from one small village to another. Had the Sultan's army not passed near the village they were staying at, she wouldn't be in this situation right now. Her father, who sent his seven-year-old daughter to Sultan's seraglio. Her mother, who was sorry but couldn't do anything to help her. The Sultan, who put the girl into his seraglio and promptly forgot about her. That seven-year-old girl was able to survive in the seraglio where nearly a hundred women lived. She held her breath and lived like a ghost so that no 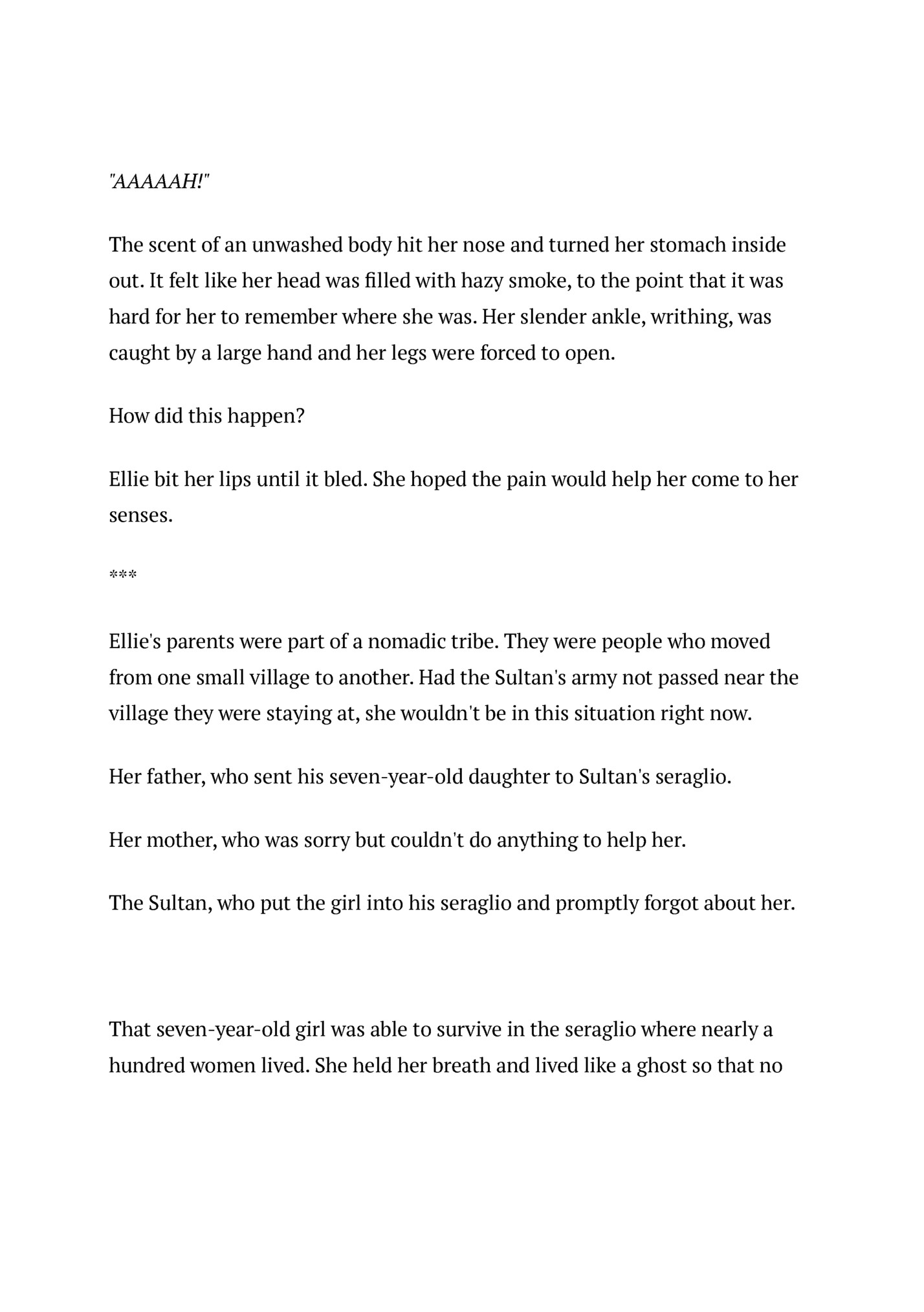 one would notice her. Hiding in the deepest, darkest corner, she'd sneak out

late at night when the whole palace was asleep to eat their scraps. Yet, she lived with hope. She kept believing her mother, father and brother would come to rescue her. 11 years have passed. 11 unbelievably long years had gone by. She can count on one hand the times she saw the rising sun. By hiding in the darkest corner where sunlight doesn't even reach, her skin became so pale that it almost looked blue. Day by day, her body lost it's youthfulness as she became emaciated due to lack of proper nourishment. She didn't know how long she could last. By then, she'd accepted the fact that no one would come to save her. Yet, she kept on hiding her existence. She would willingly suffer through the whole thing again if it meant she wouldn't appear in front of the Sultan. One night, she snuck out of her hiding place to wash. Everyone was in bed except for the slave who guarded the seraglio. On that fateful day, her luck had run out. She was caught by the Sultan who was on his way to Soviethsu's bed chamber, his favored concubine. 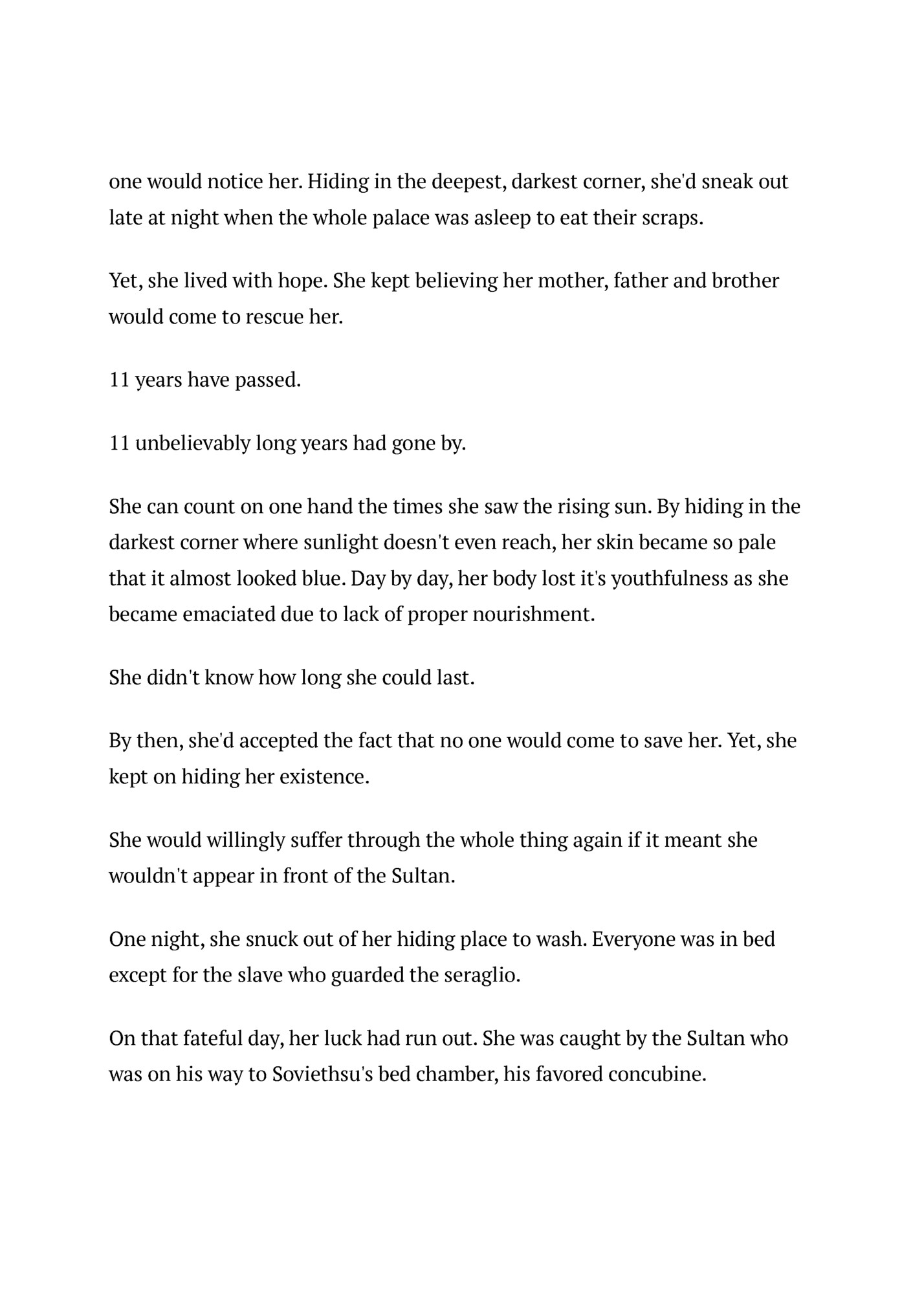 Ellie stood still. It was clear he was talking to her. When she caught sight of the Sultan stroking his long beard contemplatively, she knew there was no turning back. However, the Sultan only gave an order to the servant next to him and went on his way without another word. Ellie felt relieved and started breathing again. Three days later, the Sultan called her into his own bedroom. "That right, I remember now. You were that young nomadic girl." The Sultan found prepubescent girls who hadn't had their monthly bleed yet distasteful, which was why he placed her in the seraglio and forgot about her. The Sultan's seraglio was full of concubines, some of which he hadn't embraced even once. He scrutinized the girl in front of him. The pale moonlight made her hip-length hair glow, making it look like silk woven. Her eyebrows and long eyelashes were the same silvery color. Even her eyes, which were looking up at him, were a shade of dark grey. "Where have you been all this time?" She caught his attention. It was a pity he overlooked her beauty for such a long time. Well, he's going to make up for all that lost precious time. Suddenly, Ellie was lifted and thrown onto the bed. She tried to get up, but the Sultan covered her body with his own. 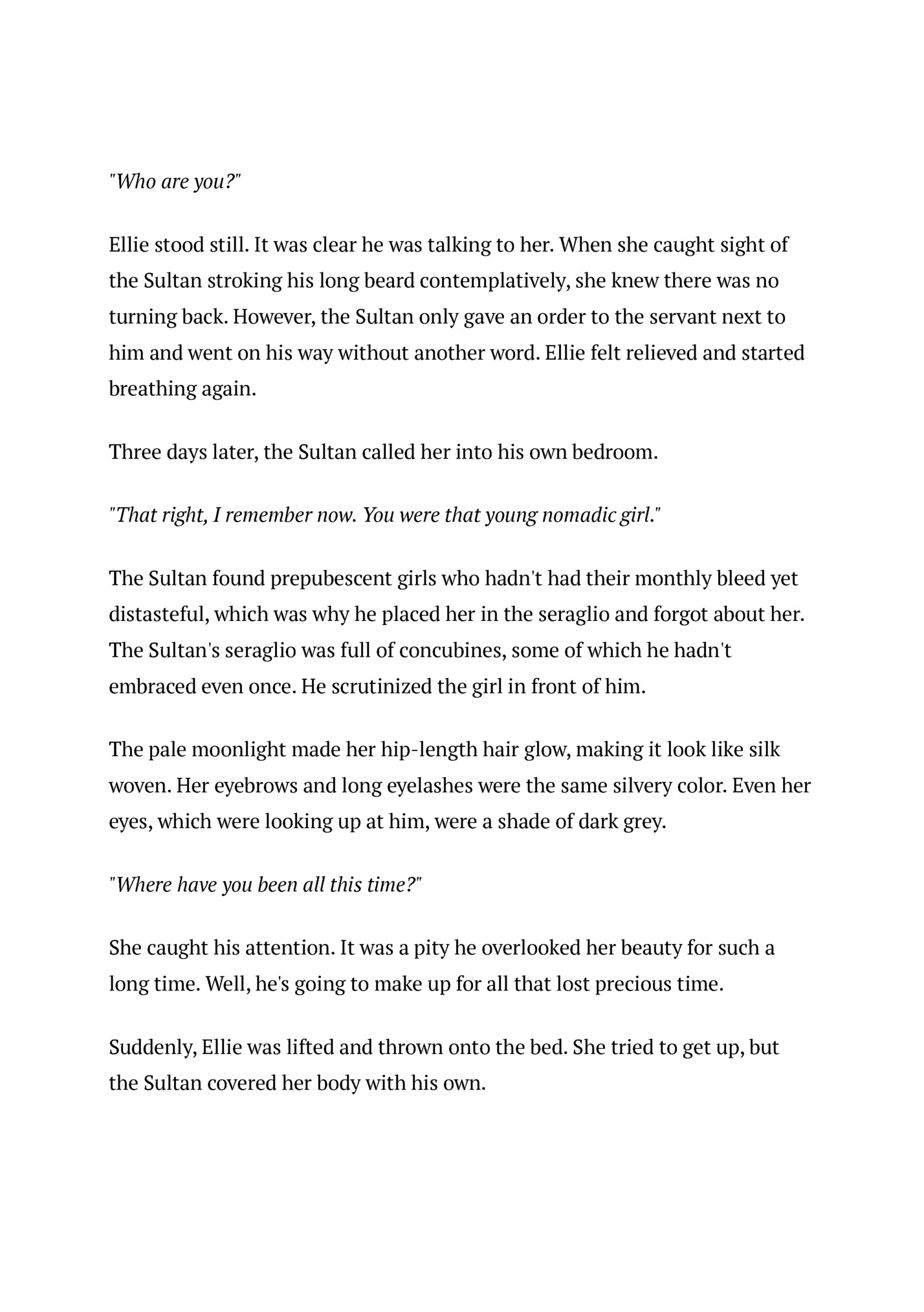 Impudent girl. If you refuse me again, I'll cut your hand off.

She knew that was not an idle threat. Ellie's trembling hands which were pushing him lost their strength and fell back into the bed. She wished time would pass more quickly. She wanted the whole thing to be over soon, so she could cower back in her dark corner where she felt safe. She knew this day would come eventually. She comforted herself with the thought that all women would have to go through the same thing. Nevertheless, she could not stop tears from falling from her tightly closed eyes. "Eugh!" Without warning, the Sultan grabbed her hair. "Open your eyes." He'd kill her if she refused, she knew instinctively. Pulled! Her mind went blank. She saw all the servants lower their heads and the guards put their hands on their swords. .......Ellie, do you want to live? She was eager to live. Even though she didn't have any reason to keep on living, she still yearned for life.

She just wanted to go outside. She hadn't stepped outside ever since she joined the harem eleven years ago. She wanted to see how the world outside had changed and breathe in the fresh air. "Sultan, your royal highness!" "Do you wish to die?! Where do you think you are?!" The servant girl who burst into the chamber turned pale. She screamed when the guard's leader drew his sword and pointed it at her neck. "T-There's a revolt!" The Sultan suddenly moved away from Ellie as fast as lightning. "What are you talking about?!" "Please leave this place at this instant. Half of the palace is already -" "Who the hell headed the uprising?" "The 9th Prince – Prince Heinley did!" Sultan haphazardly put on his clothes and beckoned all his guards and servants out of the bedroom. In an instant, Ellie was left alone in the room naked. "Prince Heinley..."

She knew him. She'd seen him several times from afar. The security in the

seraglio was only tightened up at night. During the day, a limited number of people were allowed to enter the harem. In the daytime, Ellie spent most of her time in the Sultan's library where people rarely go. She loved reading books because it gave her a way to escape her reality. The only people who visited the library were Ellie and the 9th Prince. Too late she realized it was her who was intruding on his space rather than the other way around. She could only laugh bitterly at that fact. Clang! Clash! The sound of a fight indicated that the uprising was real. The loud sound of clashing metal caused Ellie to sit upright. It was not the right time to be idle. It might be her last chance to escape, her last chance to survive and step on the soil of the world outside... If the current Sultan was deposed, his concubines could be freed – "Or killed," Ellie whispered. Will Prince Heinley release all the women in the seraglio? She couldn't be sure as she only knew him superficially. Any of the two was fine. If she was released, then she can start a new adventure in the outside world. If not, she was also fine with dying.

she'd resigned herself to the fact that it might not happen. After all, her destiny was set ever since she entered the seraglio. She hadn't fully made up her mind but she couldn't bear it any longer. So she ran. "KYAAAAA!" She shuddered when she heard the scream from afar, but her legs never stopped running. She returned to the seraglio and saw all the servants and concubines running around trying to escape with their precious jewelry. Ellie ignored them and ran into the seraglio's garden. Located near the back of the garden was a small door used to receive deliveries of produce from outside. No one knew about it except for the person in charge of food. Ellie only found it by chance. Would it be possible to escape using that door tonight? She contemplated running away and using that door as the exit a few times before. However, it was closely guarded so she gave up. Today might be different. Sharp stones pierced her feet. Even when it registered that she was running barefoot, she didn't stop. 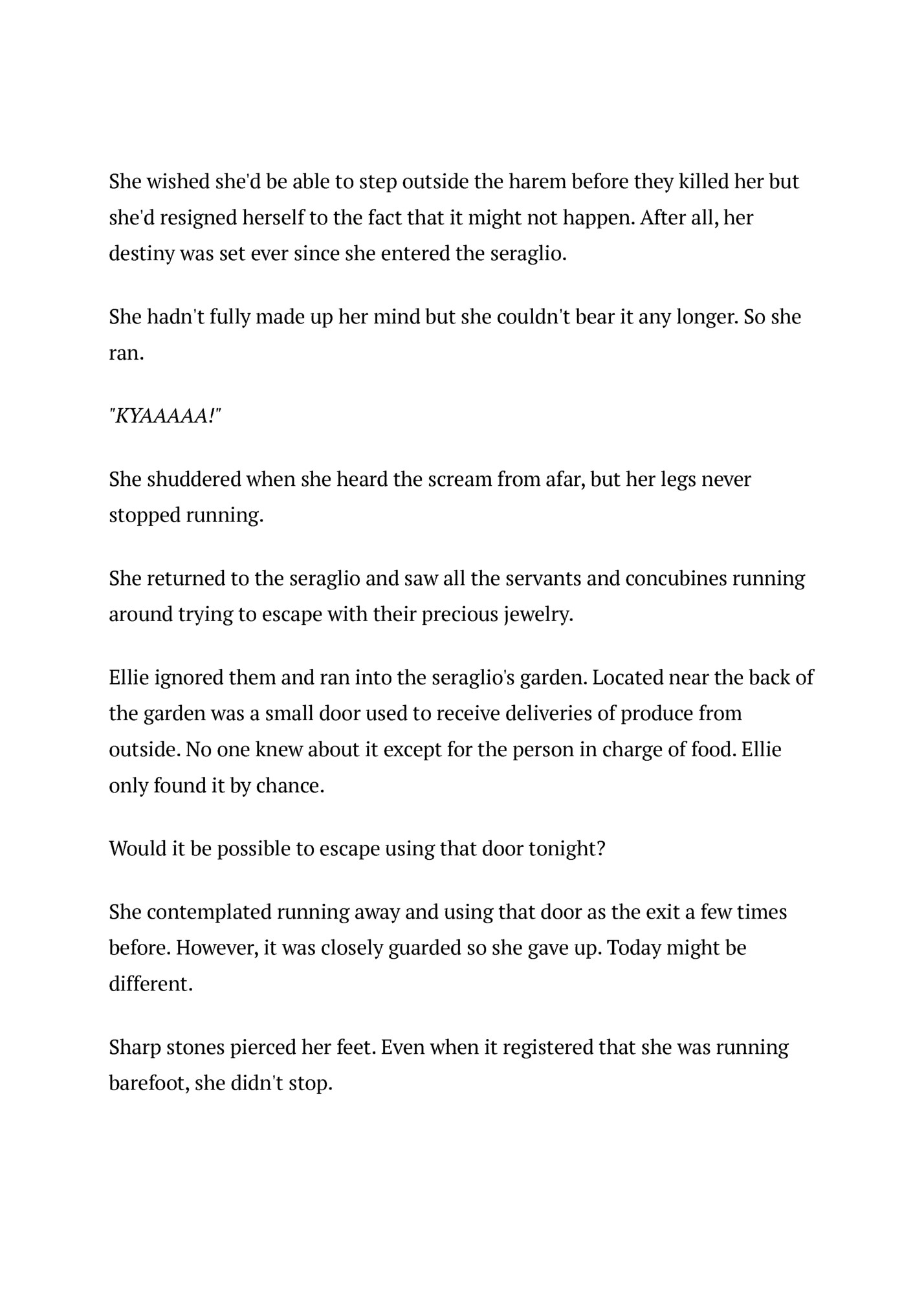 Everything was just like she hoped. The door was left unguarded. She grabbed

the door handle and pushed as hard as she could. Creeeeeaak. Did all the slaves escape already? The door, not as heavy as it looked, opened. She took her first step outside... Splash! Something warm dripped down her face. Her eyes went blank as she looked straight ahead. Something massive blocked her view before it fell to the side. She realized that 'something' was the body of the slave who usually guards the door. "Is she the Sultan's woman?" She was blinded by the light of bright torches. They were standing in the shadows so she couldn't recognize them. The substance around her was not blood, was it?! Dozens of corpses littered the ground. The foul smell of the blood made her nauseous. Now's not the time for that. She needed to take one more step. She wanted to step on dry land, not one soaked with blood. With a stoic face, she was about to step around the bodies when – 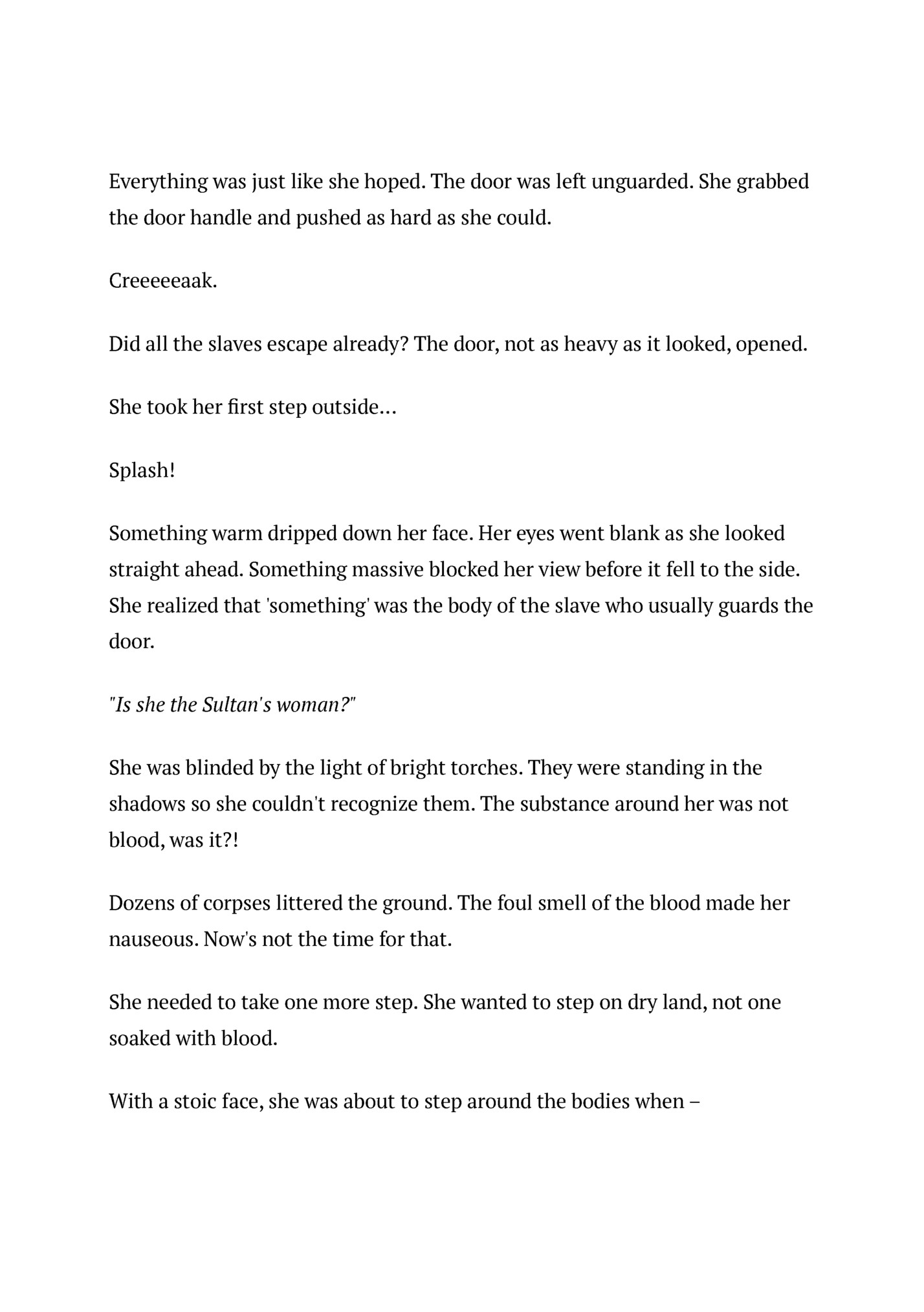