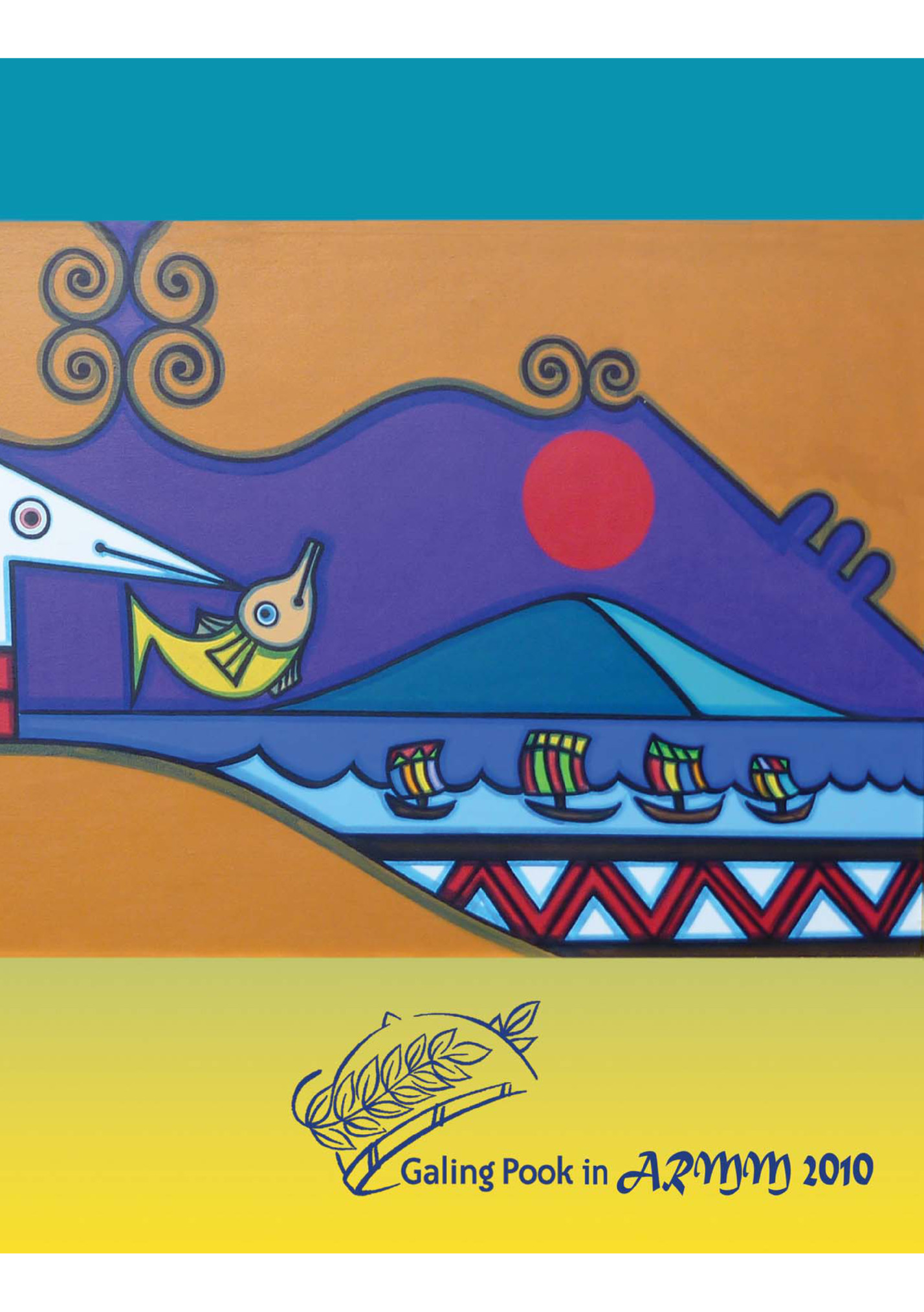 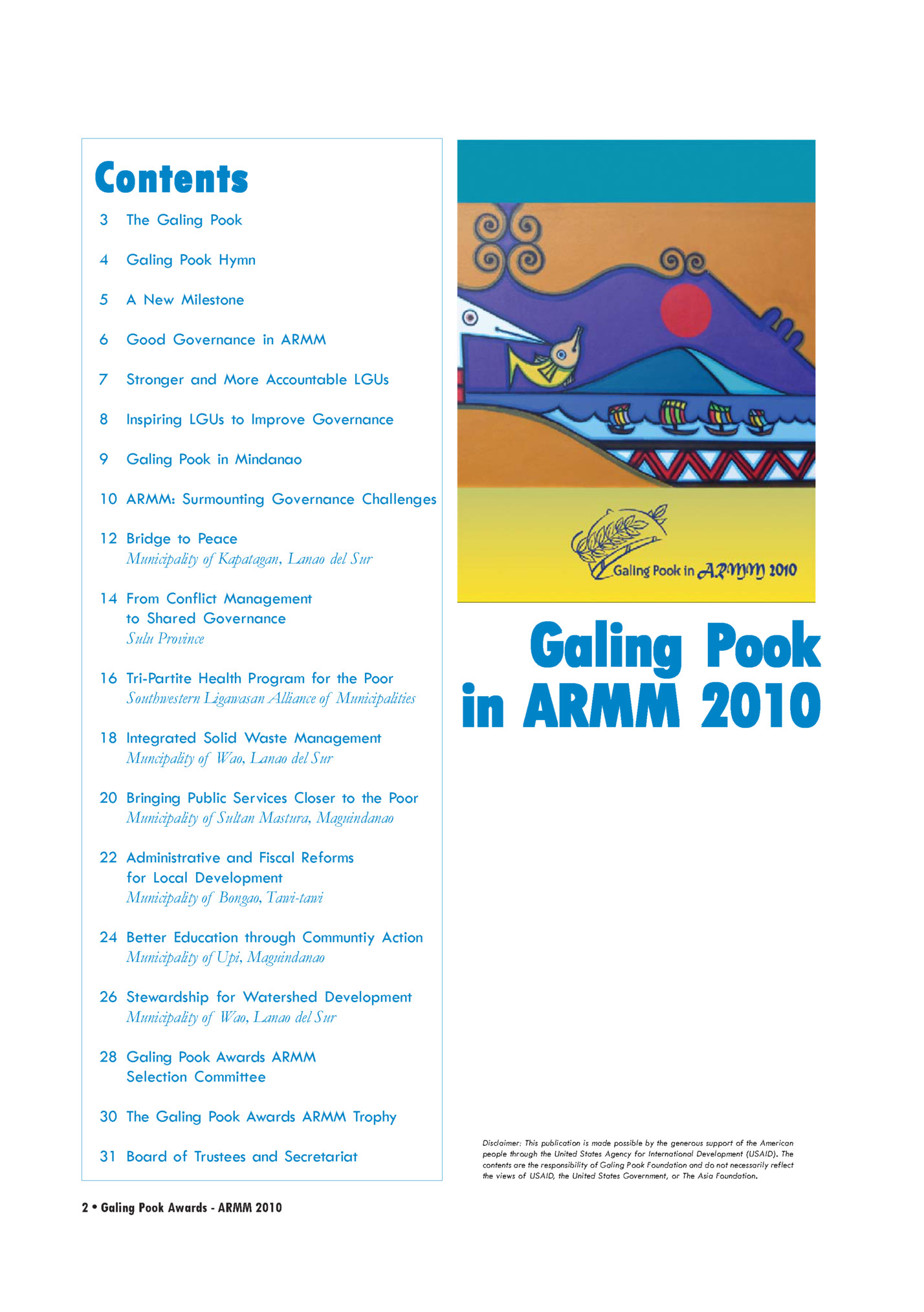 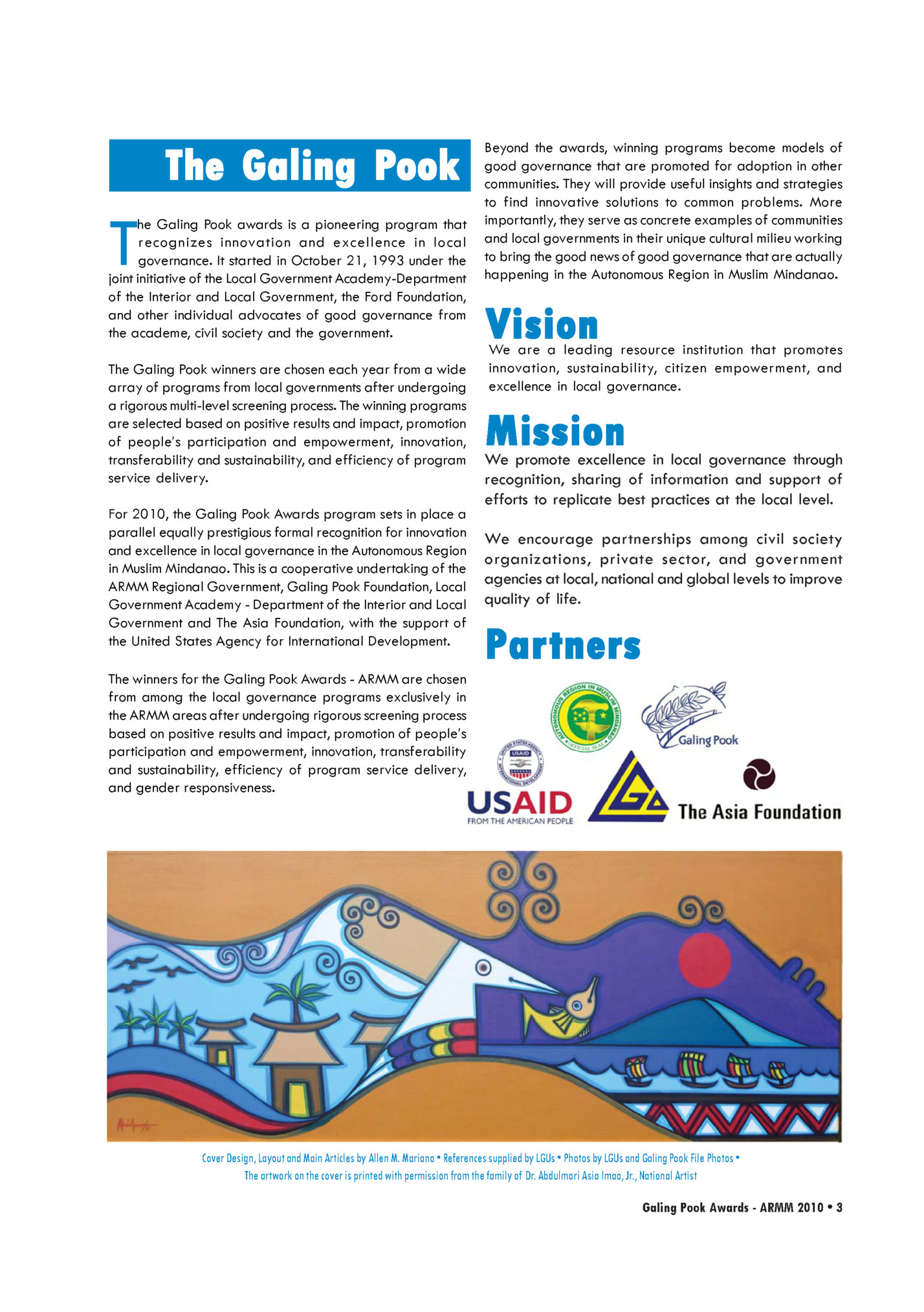 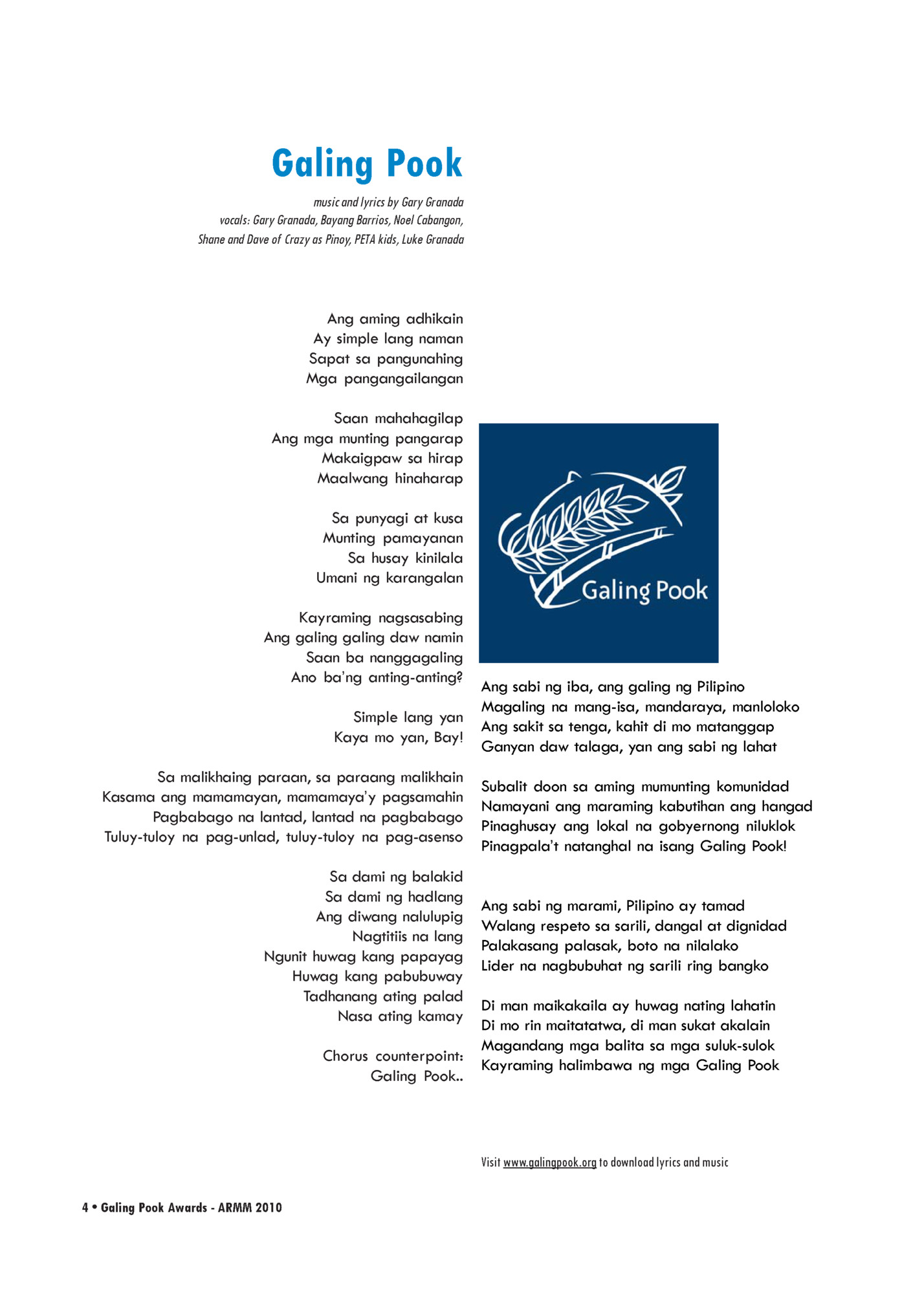 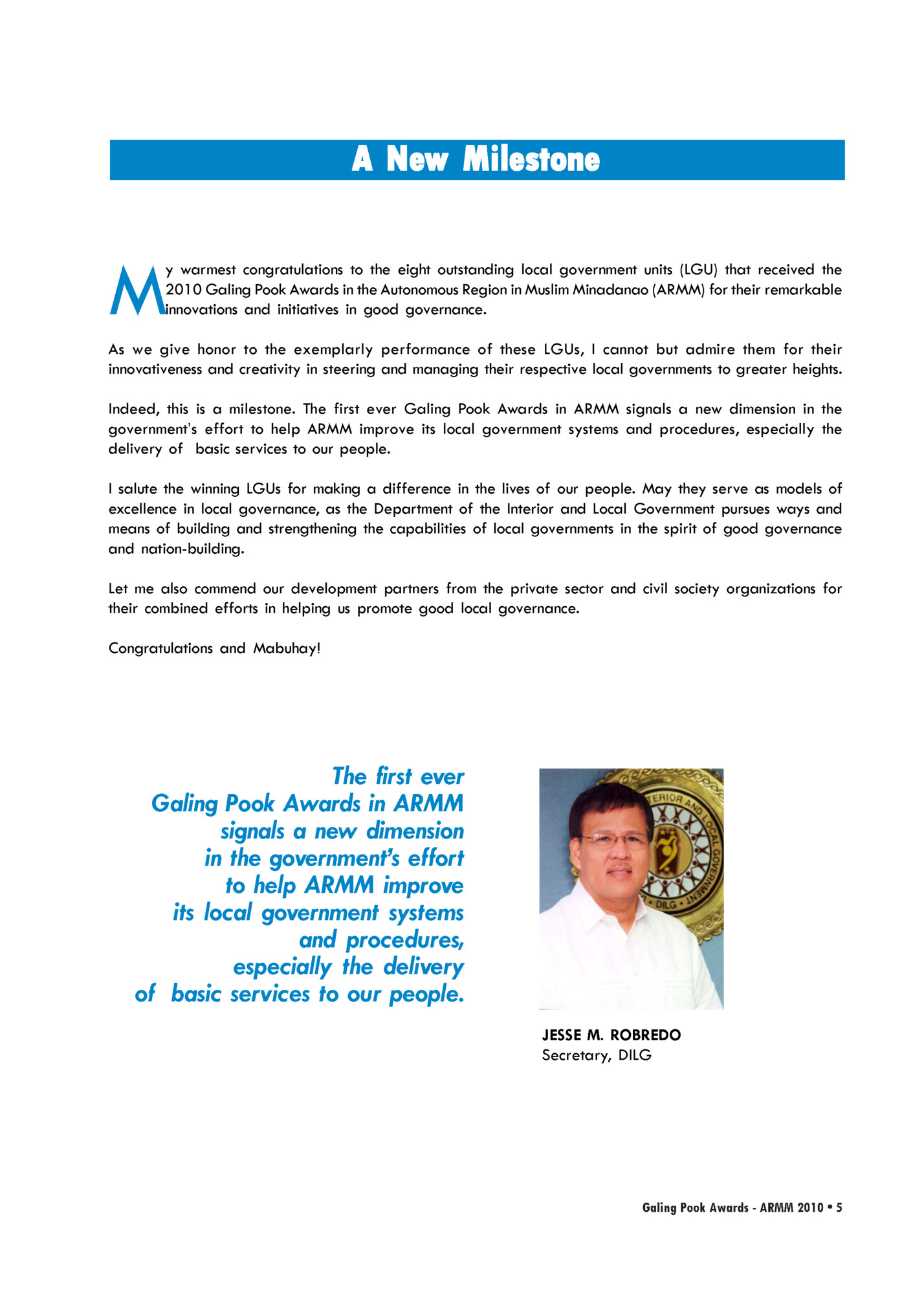 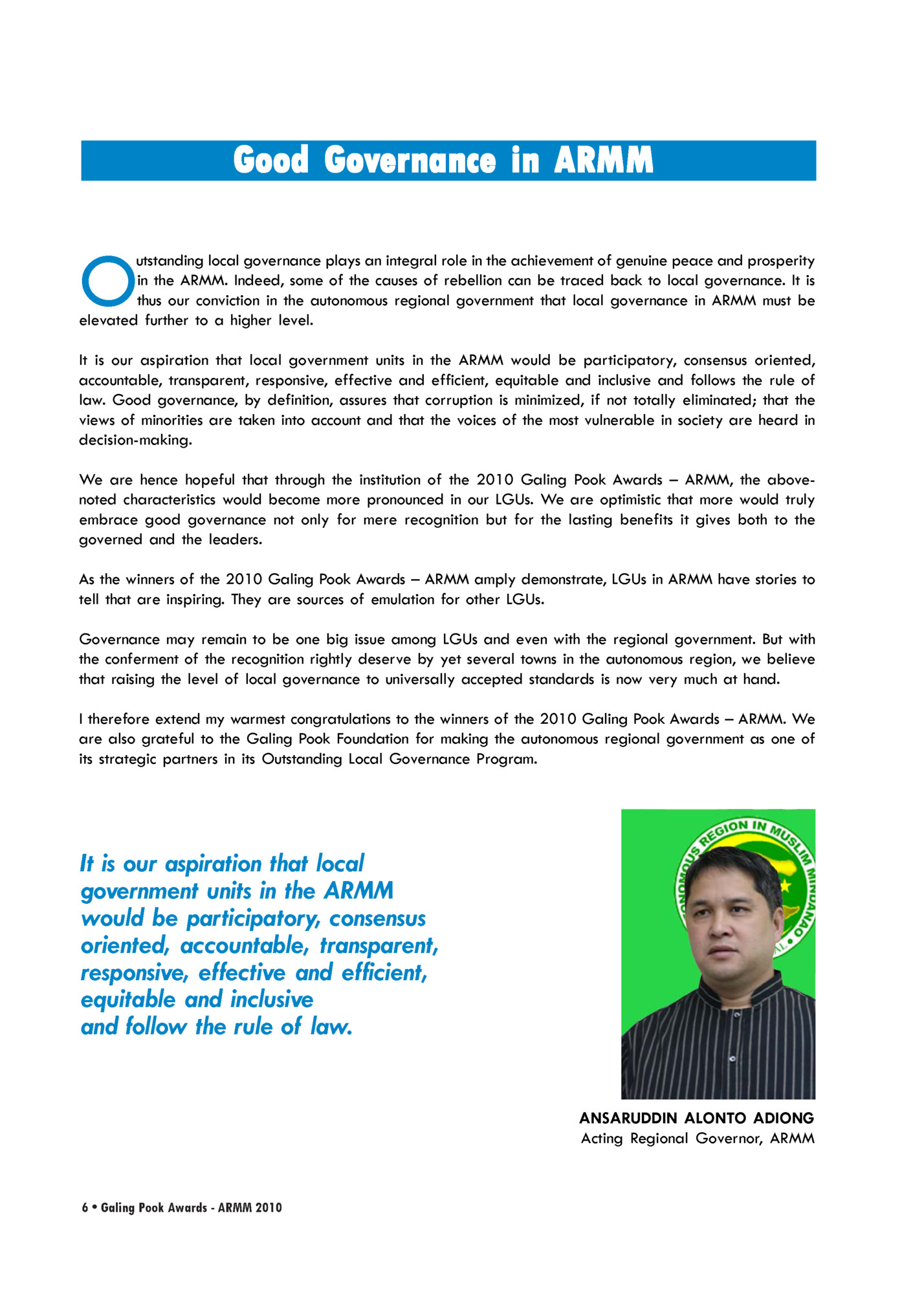 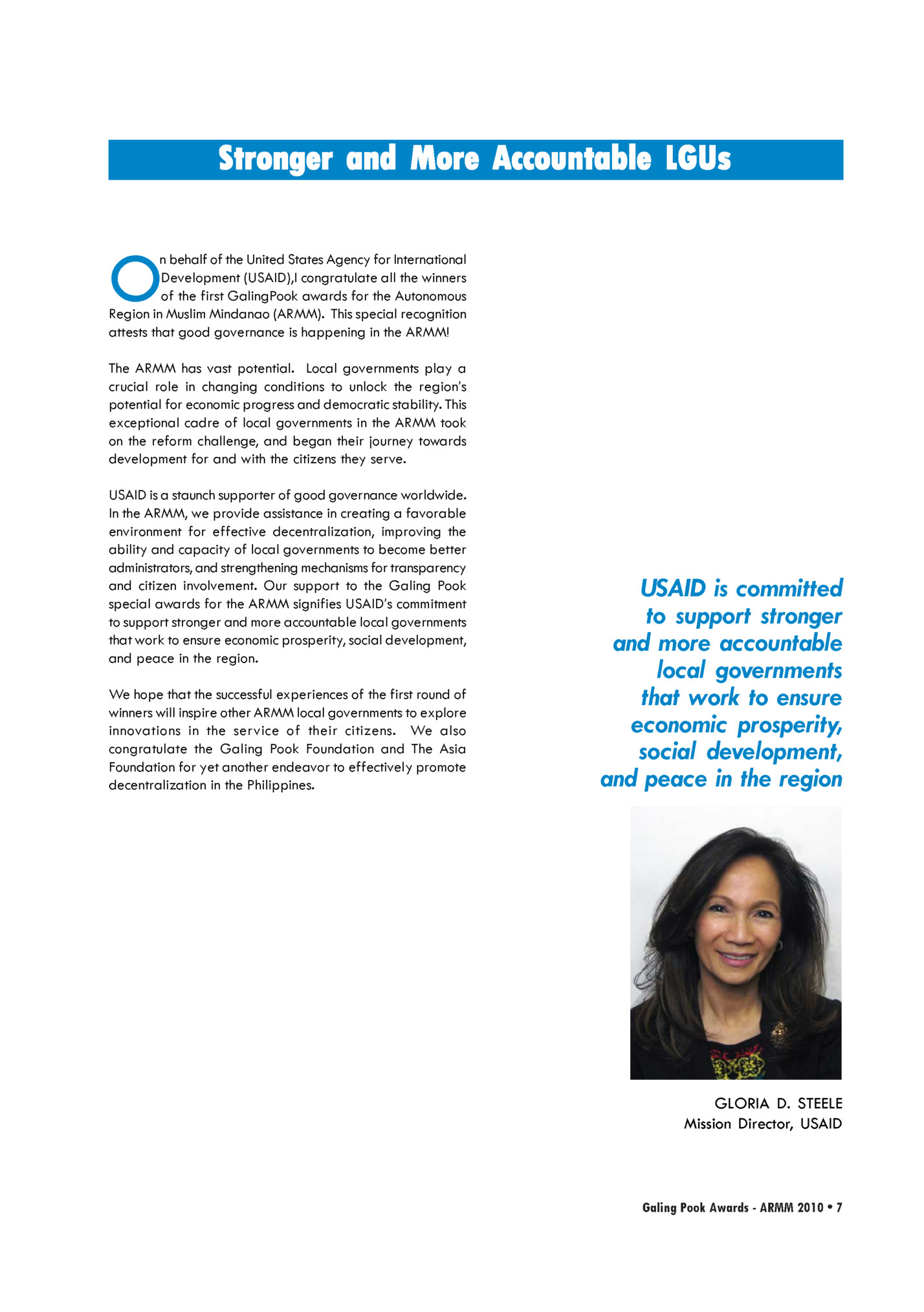 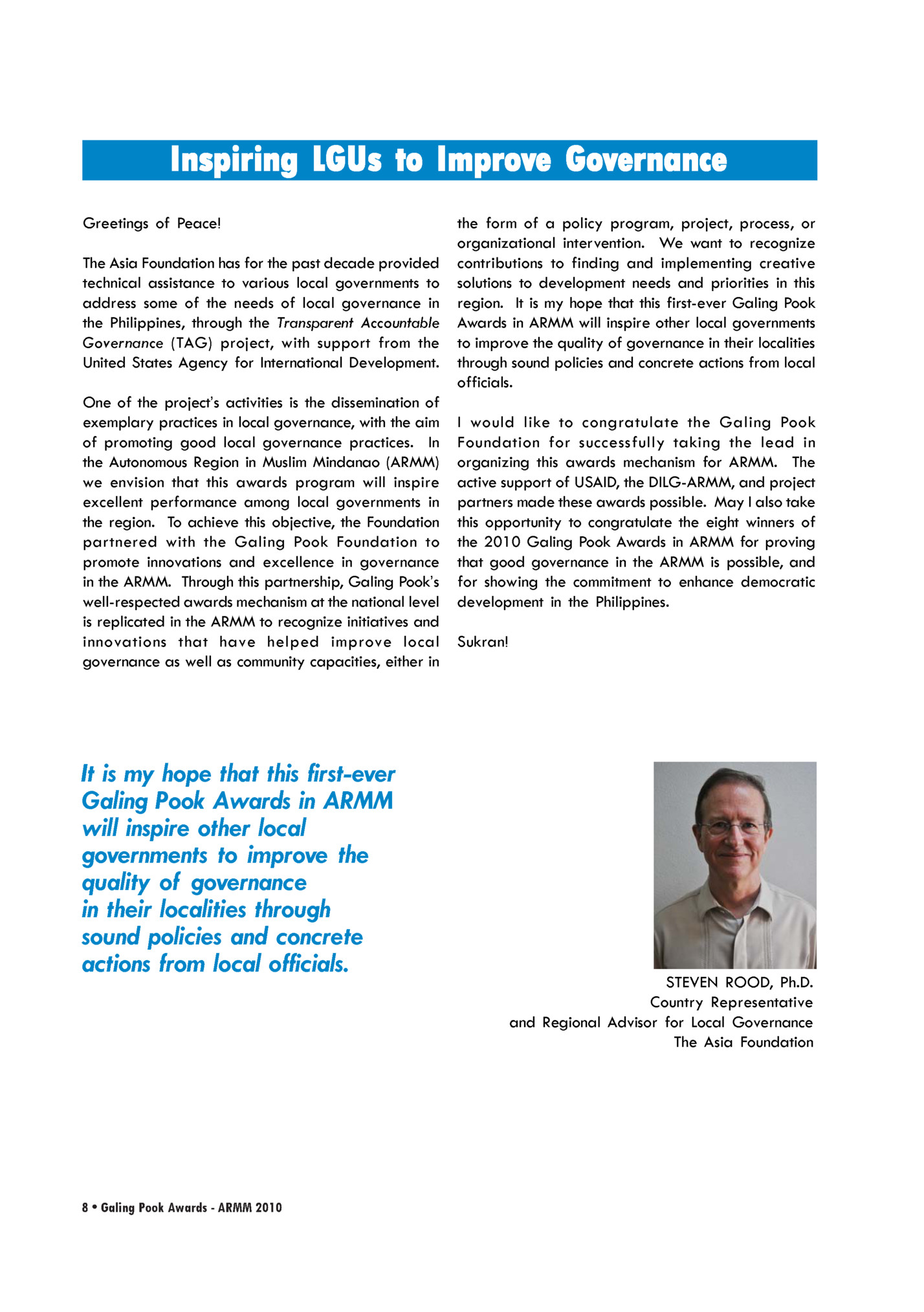 Galing Pook in Mindanao I t is easy for non-Mindanaoans to give up on Mindanao, especially ARMM. But hope springs eternal, it is said, and can be contagious when enough good news emanate from the strife-torn South. For Galing Pook, this meant finding and showcasing stories of Mindanaoans – local government and constituents – working together for the common good; of local governments doing their job and doing it well. We thus sought out, and happily found, much to be optimistic about in ARMM. In Sulu, seemingly discordant interests were harmonized and institutional partnerships enhanced, thus allowing essential goodwill to prevail and community development and services to get through. Kapatagan in Lanao del Sur chose to seize and create every opportunity for both peace-building and building on peace instead of wasting valuable time on the question of which to start first. Four towns in Maguindanao – the Southwestern Ligawasan Alliance of Municipalities – formed a multi stakeholder health program for their poor constituents, establishing birthing clinics, health centers and local pharmacies. They promoted proper nutrition and local vegetable production, developed solid waste management systems and installed water and sanitation facilities. The town of Sultan Mastura, also in Maguindanao, brought services directly to the people through a team approach and efficient consolidation of available resources. They made the presence of government felt in their barangays by delivering vital health, education, livelihood and social services. Still farther south, Bongao in Tawi-tawi reformed their most basic administrative and fiscal systems, resulting in increases in local revenues and more investments in public facilities. Upi, also in Maguindanao, took a different tack to dramatically improve the quality of their children’s basic formal education. More than just parents, teachers and schools, the local government brought together stakeholders from all other sectors in the community and promoted participative education reform to improve Upi’s public education system. And in Wao, Lanao del Sur, we saw excellent cases of solid waste and watershed management. In the first program, they showed the effectiveness of correlating household and community discipline, local regulations, efficient collection and processing systems and revenue generation. For the second program, they provided a model on expanding forest cover and protecting water sources while increasing the watershed dwellers’ income. These fine examples of governance in ARMM boil down to the choices made by the people and their local officials. And like the LGU achievers that we honor in the 2010 Galing Pook Awards - ARMM, we choose to focus on the positive. We choose to be one with them in believing there is hope in enlightened local governments. Galing Pook is happy to present the good news from ARMM! These fine examples of governance in ARMM boil down to the choices made by the people and their local officials. Rafael L. Coscolluela Chairperson, Galing Pook Foundation Galing Pook Awards - ARMM 2010 • 9 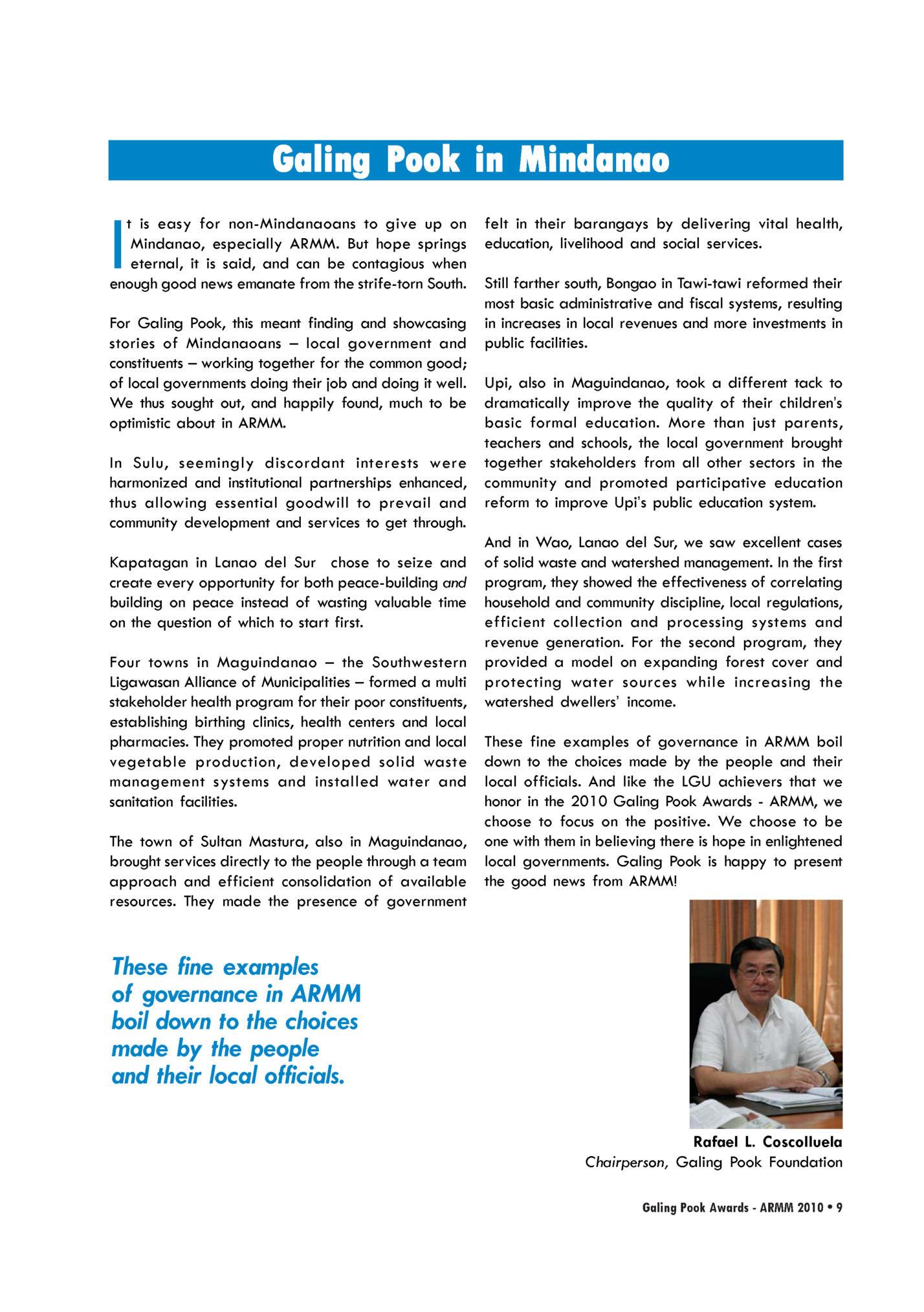