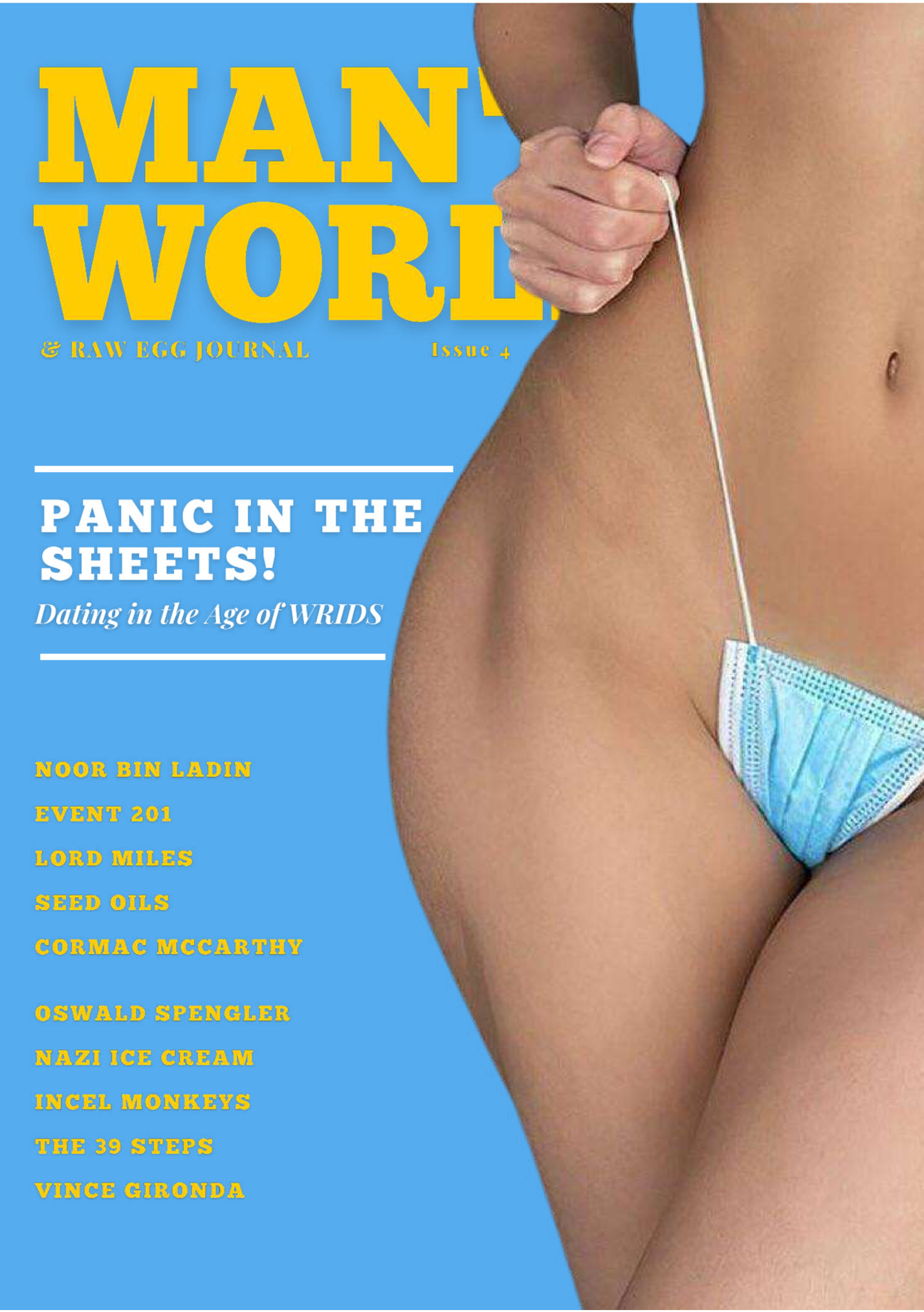 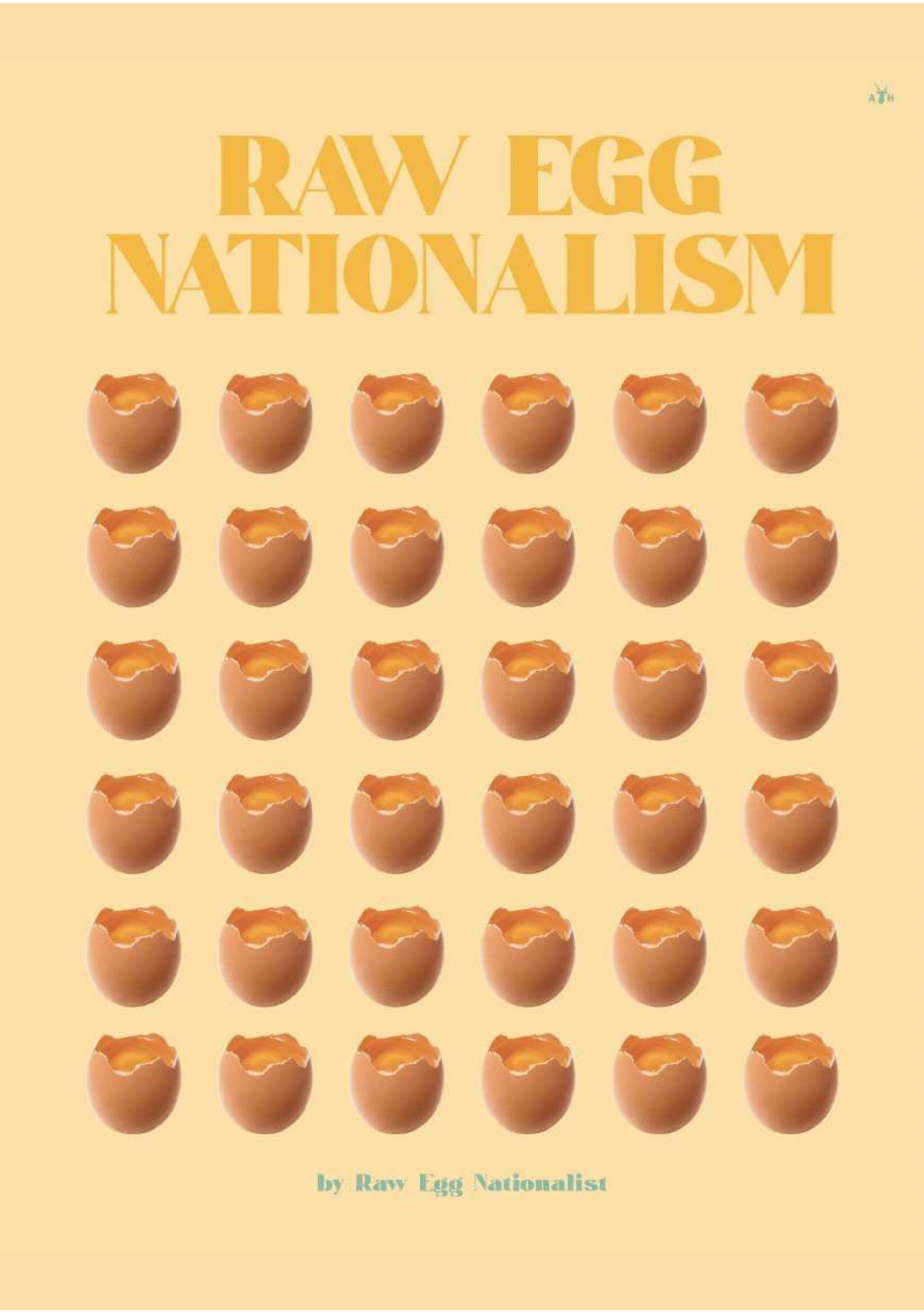 In hardback exclusively from antelopehillpublishing.com 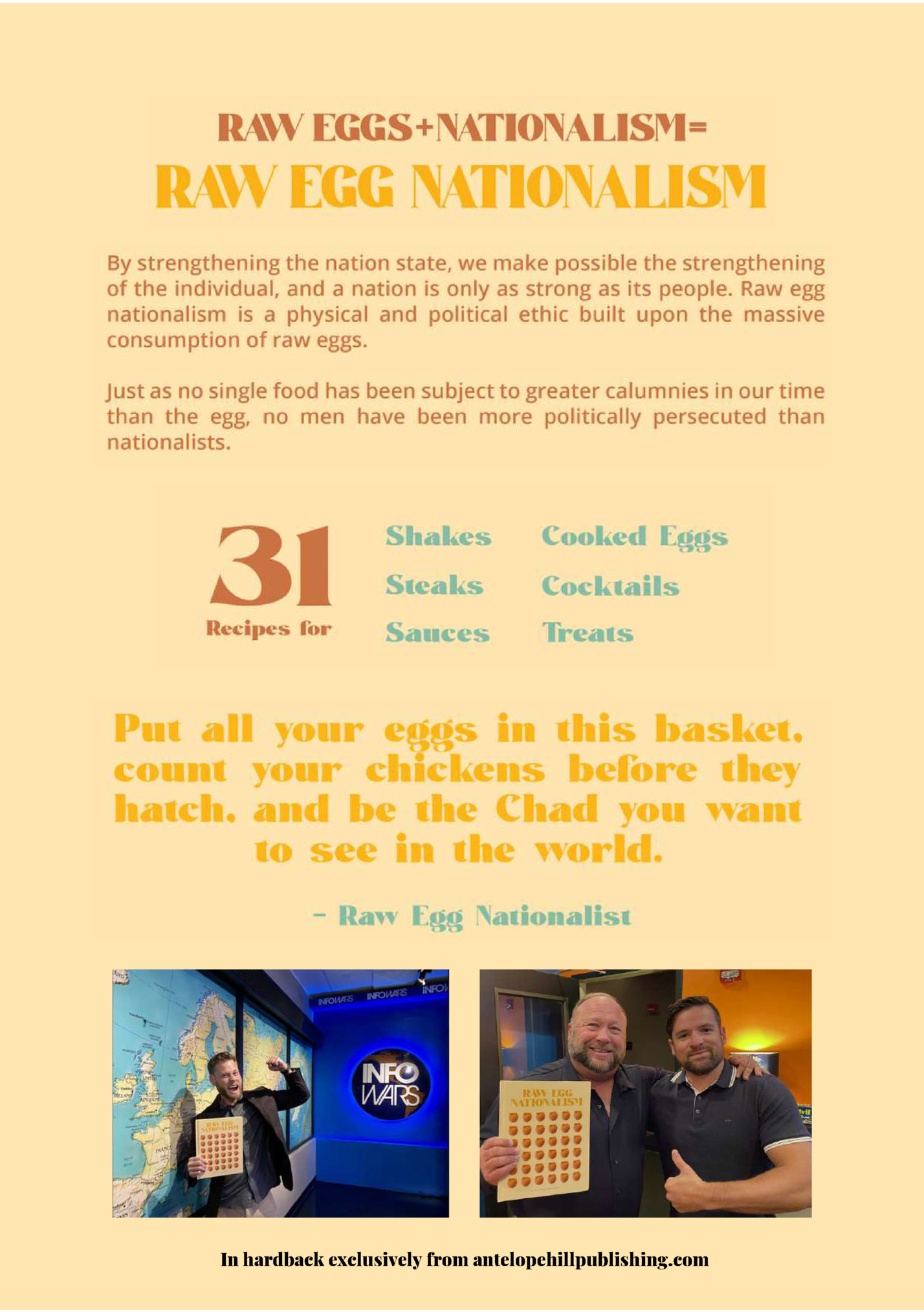 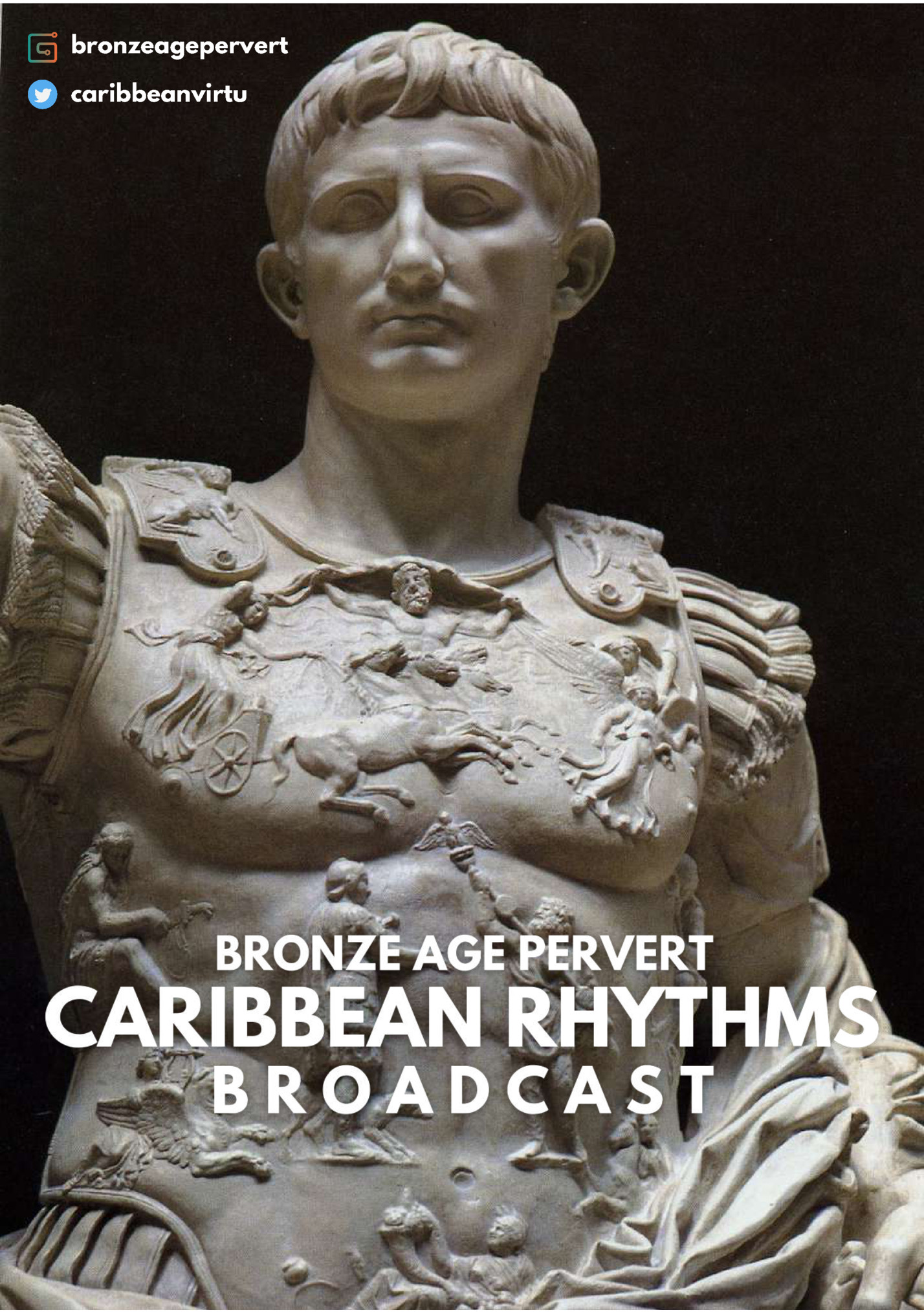 INSPIRATION Those who cannot conceive of friendship as a substantive love but only as a disguise or elaboration of Eros betray the fact that they have never had a friend. C.S. Lewis 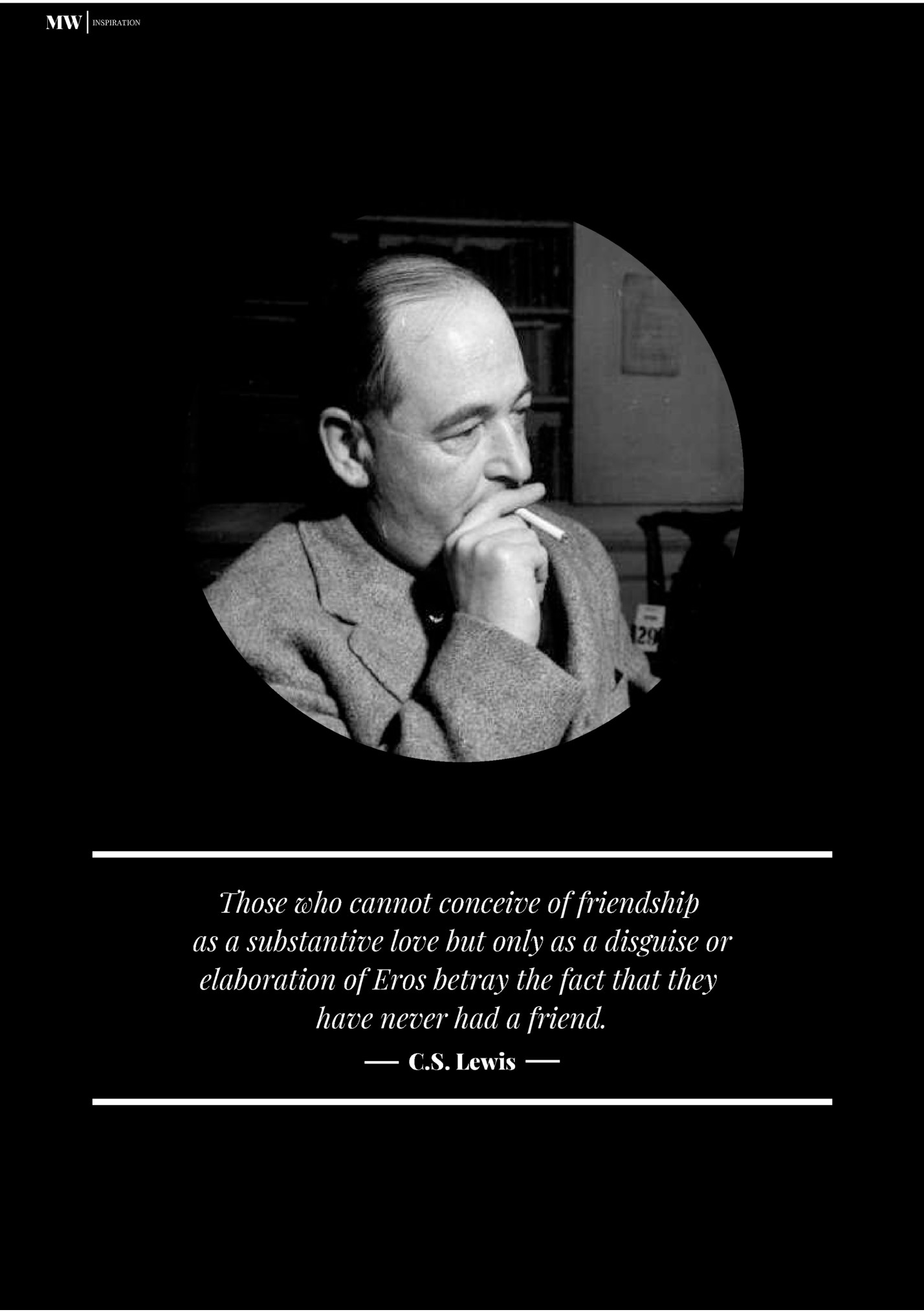 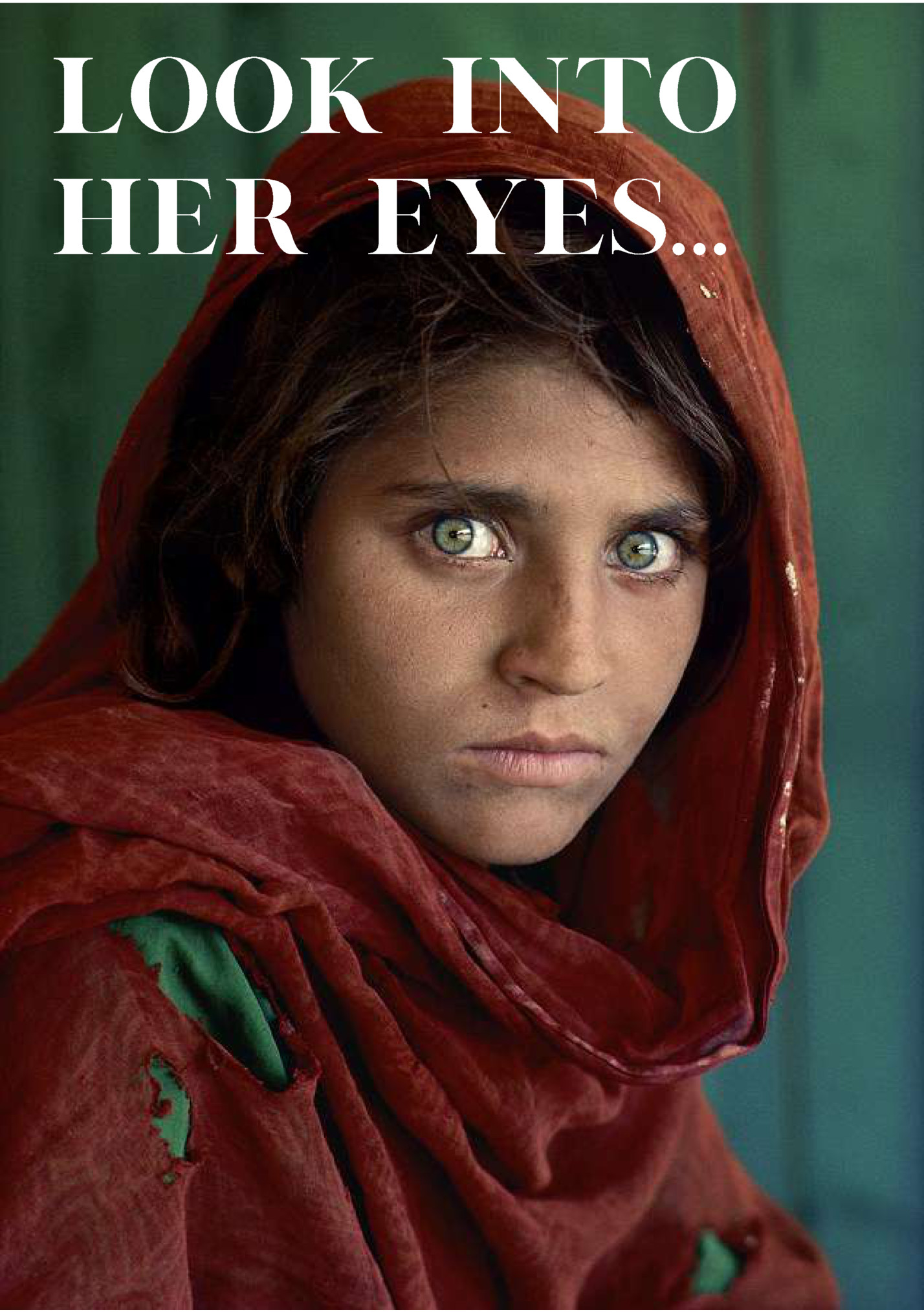 Only tumS dlroW s'naM TNEGRU LAEPPA ELAMEF ROF NAHGFA TNETNOC SROTAERC DO YOU WANT TO BE THE ONE TO TELL HER SHE CAN'T HAVE AN ONLYSMUT ACCOUNT? With President Joe Biden's shameful early withdrawal from Afghanistan, the country's nascent female content-creation scene is under mortal threat from the Taliban. Already female content creators have fled the major cities and are having to face an uncertain future. At the time of writing, we estimate some 11,000 Afghan OnlySmut profiles have not received any new content in over five weeks. If we don't act now, a whole generation of young Afghan women may never know the freedom of selling pictures of their anus for small change. When we invaded Afghanistan in 2001, we made a promise to its women that we would bring them the freedom our enemies hate us so much for. At the MAN'S WORLD URGENT APPEAL FOR FEMALE AFGHAN CONTENT CREATORS, we believe that promise matters. Make a pledge today and help reconquer the country in the name of female empowerment! 'If we don't re-invade now, how will I ever get to see this young girl's goodies?' Holden Bloodfeast (R, Iowa), proud sponsor of the Man's World Urgent Appeal for Female Afghan Content Creators Text 'war without end' to 911-2001 to donate one Hellfire missile now! HELP #ONLYFANSFORAFGHANS TREND TODAY! *this is satire 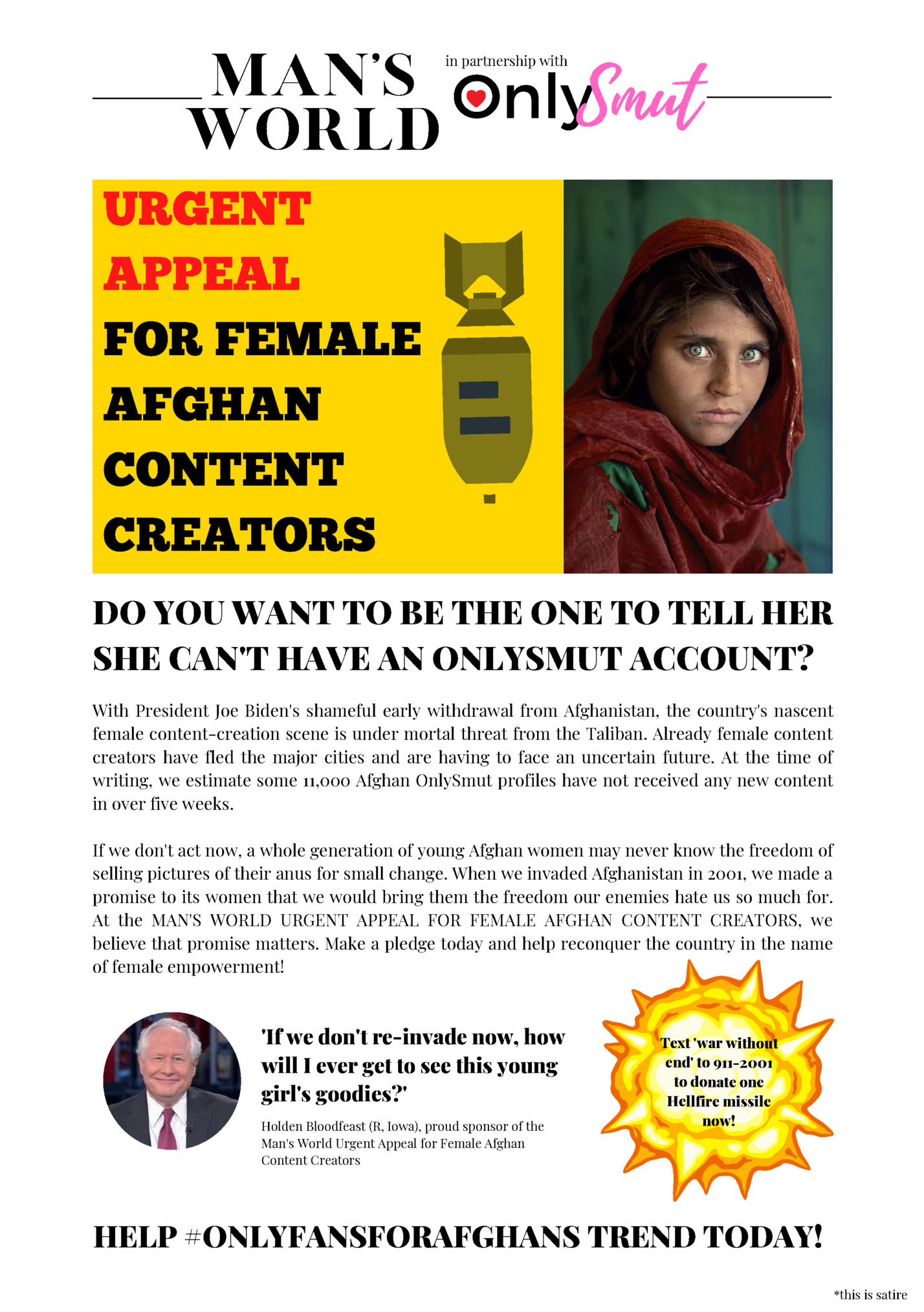 Welcome! Wilkommen! Bienvenue! добро пожаловать! ‫أهاًل وسهاًل‬ ! ELLO ES, H Y Gree tings from the E ditor RAW EGG NAT ION ALIS T (@ baby grav y9) W ELCOME TO FRIENDS OLD AND NEW. ‫أهاًل وسهاًل‬ to any Talichads who may be reading this on captured Amerikwan laptops or iPads. Congratulations on vanquishing the pantsuit empire! (Thanks for the follows on Twitter, too!) The ignominious retreat of the pantsuit legions from Afghanistan is reason for celebration but also bitter reflection. How can we ignore the terrible cost in blood, and of course treasure, that twenty years of warfare in the Graveyard of Empires has cost us? We sent so many of our best, the brave, the steadfast – for what? Whatever the war actually was about, it wasn't about making the world safer or better, certainly not for you and me or for the female content creators of Jalalabad (please support our appeal). And now, what's worse, American patriots face the prospect of the entire security apparatus developed for the War of Terror being redeployed on home soil against a new fabricated threat: 'domestic terrorism' in the form of the dreaded 'white supremacy'. A new kind of domination, unknown in the Republic's history, beckons (just remember you can't spell 'tyranny' without 'tranny'). Still, the Taliban victory shows, at least, that the forces of Globohomo can be defeated, with great faith, cost and patience. We too must learn to wage the war of the flea. The hegemony of the rainbow flag is not inevitable! On the subject of events in Afghanistan, this issue of MAN'S WORLD contains one of its finest scoops to date: an interview with LORD MILES ('The Channer Who Would Be King'), the intrepid young man who made the brave (some might say 'stupid') decision to infiltrate the country just as everybody else was doing their level best to get the bloody hell out. What else? I'm sure you've noticed our wonderful cover. I'm afraid, dear critics, you're not going to be able to cry 'GAY!' this time. Anyway, just like the wellproportioned sailor of Issue 2 fame, sexy face-mask-panty woman also serves a serious purpose here, namely to introduce what I consider to be my finest essay to date: 'Panic in the Sheets: Dating in the Age of WRIDS'. What's 'WRIDS'? I hear you ask. Why, it's Wuhan-Related Immune Deficiency Syndrome, a classic frog coinage (I believe from @lokijulianus). What do my hilarious attempts to date during the pandemic tell us about the nature of this terrible juncture we're at? Read on and find out. We also have an exclusive interview with the delectable NOOR BIN LADIN, who will be telling us the truth about what based women really want; articles on SEED OILS, EVENT 201. CORMAC MCCARTHY; a health and fitness special from HERCULEAN STRENGTH; a secret recipe for NAZI ICE CREAM; as well as entirely new opinion, news and cartoon sections. Man's World Issue 4: the best just got even better! 7 RAW EGG NATIONALIST (@babygravy9) WANT TO WRITE FOR MAN'S WORLD? Here at Man's World, we're always looking for new contributors to dazzle, inform and amuse our readership, which, after three issues and less than nine months, now stands at over 150k. If you have an idea for an article, of any kind, or even a new section or regular feature, don't hesitate to get in contact either by tweeting @babygravy9 or sending a direct message. Generally, the word limit for articles is 3,000; although we will accept longer and (much) shorter articles where warranted. Take a look at the new sections in this issue for guidance and inspiration. 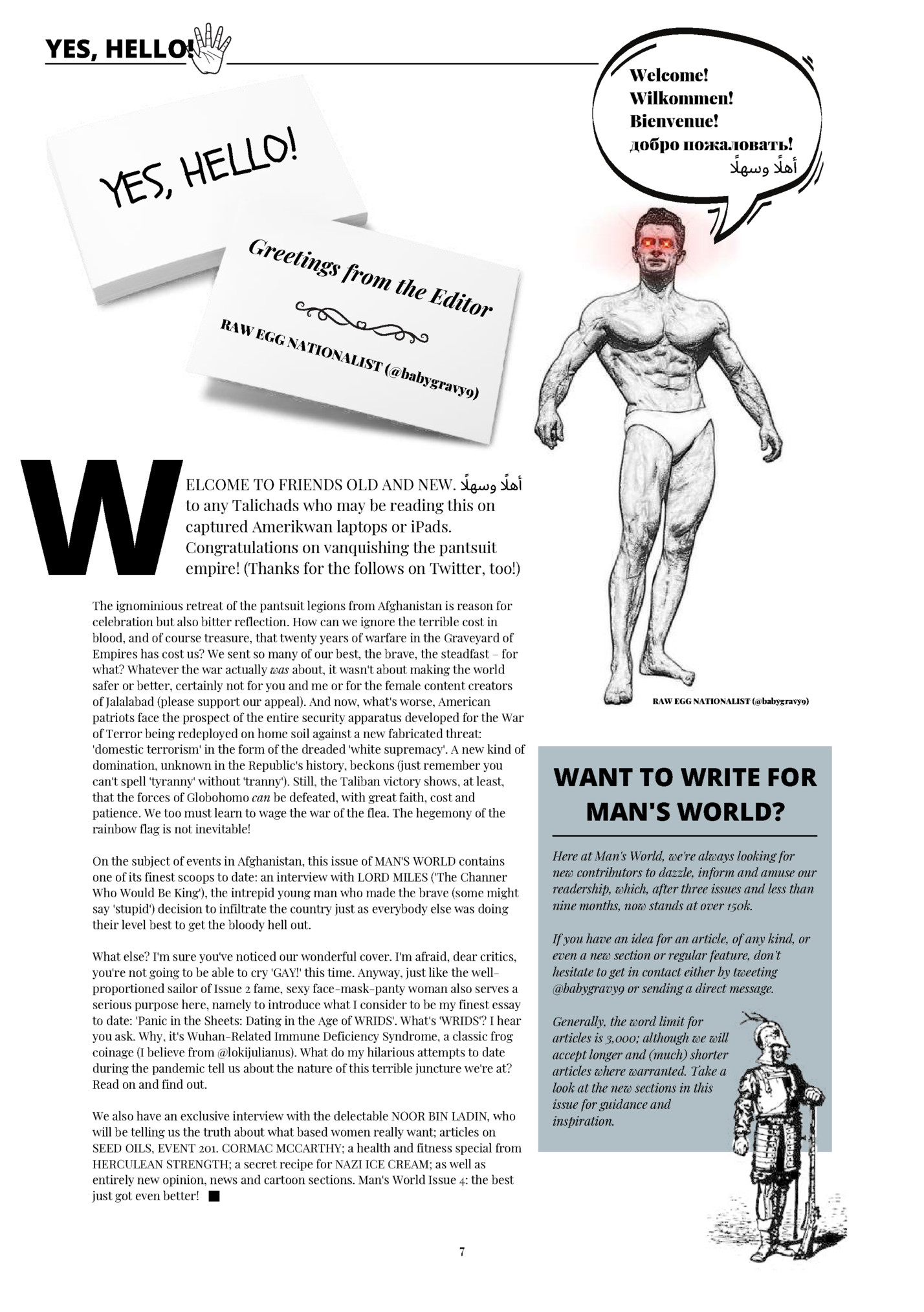 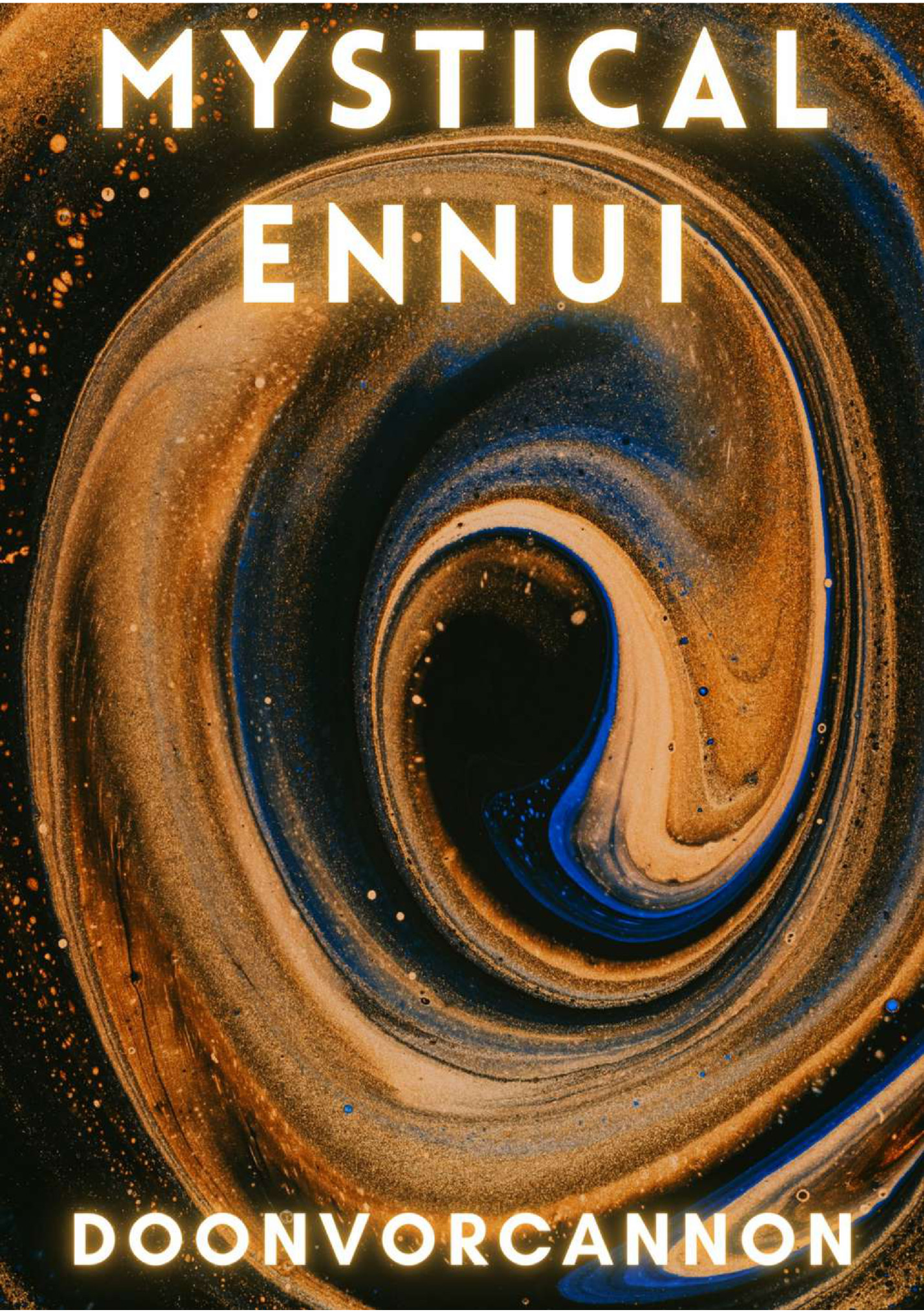